The Energy Information Administration released its Short-Term Energy Outlook for March, and it shows that OECD oil inventories likely bottomed last June at 2.806 billion barrels. It estimated a 21-million barrel decline for February to 2.837 billion, 9 million barrels lower than a year ago.

However, throughout 2019, OECD inventories are expected to rise rather quickly through November. At year-end, EIA projects stocks to be 2.918 billion barrels, 64 billion more than at the end of 2018.

For 2020, EIA projects that stocks will build another 82 billion barrels to end the year at 3.000 billion. That would push stocks into glut territory. 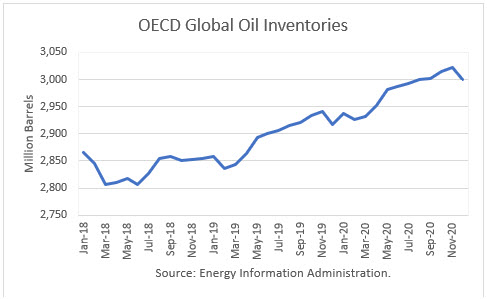 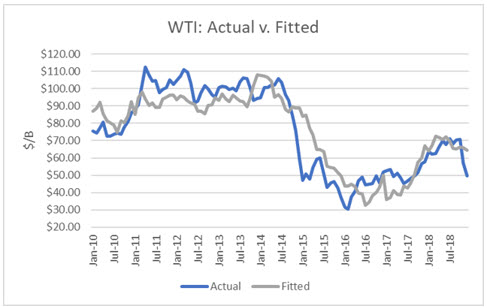 I used the model to assess WTI oil prices for the EIA forecast period through 2019 and 2020 and compared the regression equation forecast to actual NYMEX futures prices as of March 14th. The result is that oil futures prices are presently undervalued until June 2019. 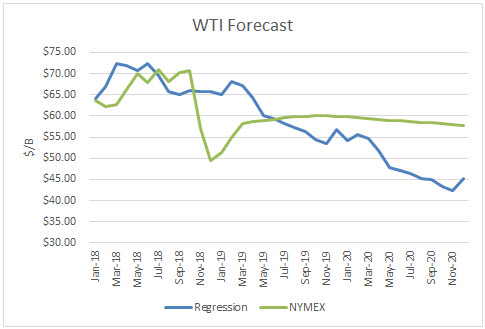 Based purely on this model, the oil price crash in the fourth quarter was overdone. However, the market was shocked by the sudden oversupply since it was expecting an undersupply once sanctions went into effect, but Trump granted waivers.

Following the draw in February, OECD oil inventories are projected to build again through 2019. That, in addition to uncertainties around Venezuela and Iran, could keep prices could exceed $60s in the months ahead.

However, the NOPEC legislation – No Oil Producing and Exporting Cartels Act – in the U.S. Congress is progressing. The House Judiciary Committee approved the bill, and it will be considered by the full House. There is bipartisan support.

Suhail Mohammed Al Mazrouei, the United Arab Emirates oil minister and the former president of OPEC, told a group of U.S. financiers Monday that "if the so-called NOPEC bill becomes law, the cartel would stop working and therefore every member would raise production to maximum capacity, causing a crash in oil prices, according to people who attended the meeting".

OPEC General Secretary Barkindo has said, "it is not in the best interest of the United States to enact NOPEC". U.S. Energy Secretary Perry has said, that he "wants to see oil prices remain stable".

At present, market conditions are too risky for me to favor either side of the market compellingly. I will wait for a better opportunity.