Hello traders everywhere. Earnings season started with a bang early Friday as two major U.S. banks shared better than expected Q1 results which propelled the market higher at the open. The S&P 500 pushed above $2,900 for the first time since October of 2018, the DOW up over 290 pts in early trading and is trying to post a weekly gain after being quiet for much of the week and the NASDAQ continues to march higher gaining +.47% on the week making this three straight weeks of gains.

JPMorgan Chase earned $2.65 a share in the first quarter, easily beating third-party consensus estimates of $2.35. Revenue—which many analysts had expected to decline—rose 5% to $29.9 billion as the company appeared to benefit from higher interest rates and strength in consumer banking. Shares rose more than 2.5% in pre-market trading. 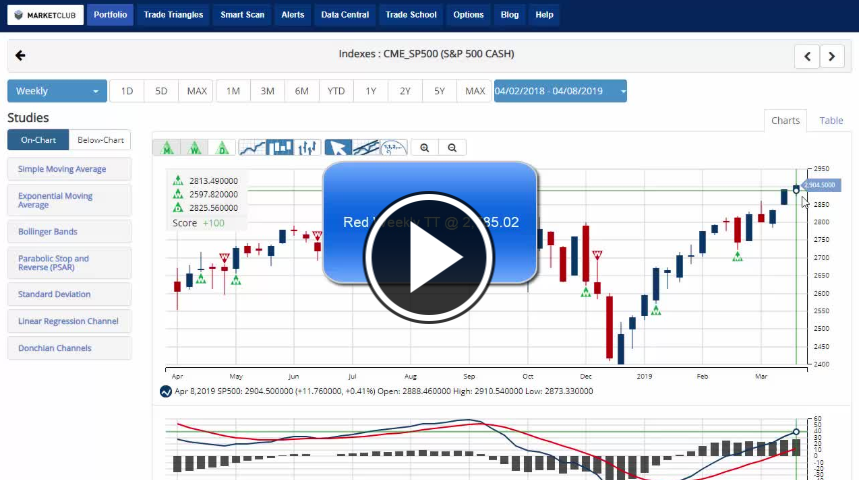 The U.S. dollar retreated as the week ended with investors dumping haven assets turning to riskier assets like stocks after a strong round of earnings releases. The dollar will post a weekly loss of -.48%

Gold took a big hit Thursday dropping over 1% to trade back at the $1,295 level where it remains trading on Friday. That move kicked in a new red daily Trade Triangle pushing the Chart Analysis Score to -100. You could see a move lower for gold in the near-term.

Bitcoin's 5 week run of gains will come to an end this week with the cryptocurrency losing -.86% on the week. Bitcoin briefly dipped below the $5,000 level to hit $4,912 before heading back up above $5,000 Friday. It's still trading above its 200-day MA and that should continue to provide support as the tug of war between the bears and bulls continues.