Hello traders everywhere. Well, it finally happened. Both Bitcoin and the DOW joined the party by issuing new green monthly Trade Triangles to kick off April. The DOW was first by triggering it's new green monthly Trade Triangle on Monday when it experienced a +1.27% gain or 329 pts on the day. Not to be outdone, Bitcoin made a HUGE move on Tuesday gaining 899 pts and +21.5% closing above $5,000 for the first time since Nov. 18th of 2018.

Bitcoin had been stuck between $3,500 and $3,800 for three months, but once it broke through the $4,000 wall, it appears that the Bitcoin bulls came calling. Bitcoin volume on the Binance exchange hit an all-time high on Tuesday—buying begetting more buying. However, Reuters also points to a single "mystery order" for $100 million worth of bitcoin, spread across multiple exchanges including Coinbase and Kraken, identified by U.K. crypto broker BCB Group. It will be interesting to see if this momentum can keep up or if this was an isolated incident brought on by that one big order. Make sure you keep a close eye on your stops. 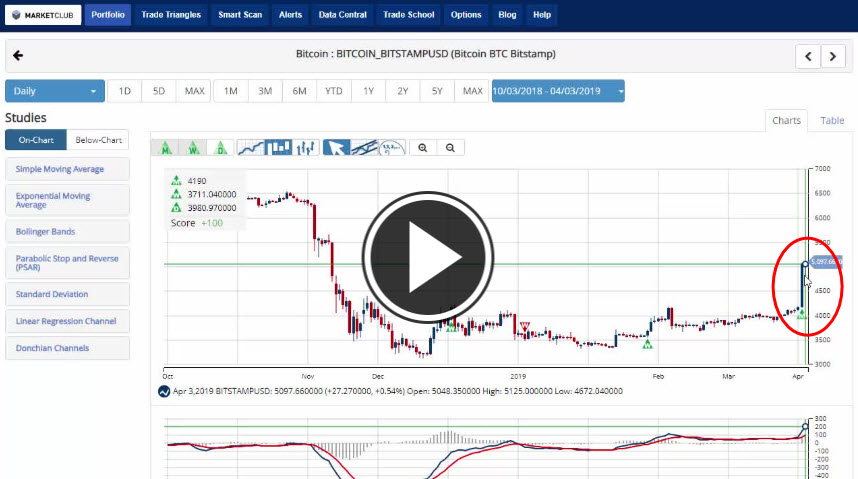 American and Chinese officials are reportedly closing in on a trade deal, having resolved most of the outstanding issues in their protracted trade dispute. Both countries have levied tariffs on billions of dollars' worth of each other's goods since last year.

According to the Financial Times, Beijing wants Washington to remove existing U.S. duties on Chinese imports, while the Trump administration wants China to agree to enforcement measures that ensure the country sticks to the deal.

2 thoughts on “Bitcoin And The DOW Join The Party”