Back in February, I wondered: “How Far Could Crude Oil Go?” As this commodity confirmed the upside reversal breaking above $54.6. We are still living in a “PetroWorld” therefore the price of oil is crucial, and it impacts all of us around the globe. So, we should watch it carefully.

I spotted a structural similarity on the weekly chart, which was cloned and applied to the current pullback of oil price on the lower time frame daily chart. The price target was set at the $63.7 and the time goal was set on the 6th of May, 2019.

Before we move on to the updated daily chart, I would like to show you the results of your ballot on this topic.

I can’t express all my gratitude for your voting activity and support of my experiments. The results in the diagram above show that you also saw the area above $60 as a target for the current pullback. It is yet early to say if the price has topped already, but our initial target was achieved and even was passed over ahead of time.

In another ballot, you voted for the instruments you liked the most. 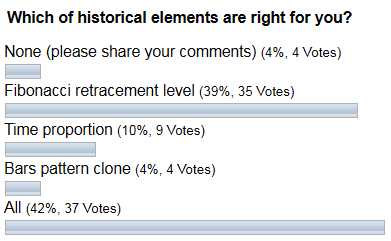 Here again, most of you supported me by choosing “All” instruments option. Thank you, my friends! The second runner was a classic Fibonacci retracement level and its quite natural answer as pullback means retracement.

Ok, let’s get down to the updated daily chart and see how price moved compared back to back with the clone.

The clone target of $63.7 was hit one month earlier than predicted on the 8th of April, 2019 (orange vertical line). The highest point of the current pullback was established more than $1 higher at the $64.8 the next day. Last Friday the price drifted lower to close right in the area of the initial target.

Only the first leg of the clone (blue bars) till the mid of February looks similar, and then the actual price dynamics (orange bars) has made a spin-off to move higher. An intermediate correction of actual oil price has started later and was shorter than that, we can observe in the clone. The gap between the clone and the actual price trend continued till the beginning of this month as crude oil has made a pause in a minor consolidation and clone has accelerated its move up to catch up with the real price. Right after that, the acceleration has exhausted and the actual price of oil moved further up after the short break to make a new gap with a clone. That brought us an early victory. The oil price has gained more than 16% since the previous post was written. My congratulations to all of us!

The target has been reached and what is next? Let’s see the updated weekly chart, which was the model for the clone to find out if there is any clue.

It is early yet to judge if this upside move has been topped or not, but the current pullback accomplished the minimum target as it finally retested the former support (red trendline). And so did the blue CD segment, which is equal to the blue AB segment. It means that the second leg of the pullback also reached the minimum target. Add here that the price retraced the standard 61.8% Fibonacci level and the picture starts to become worrisome for the bulls.

As we are not guessing the tops let’s see where we can set the triggers once the price starts to collapse. The first one is located at the $58.1 level where the earlier minor consolidation has bottomed. The concept is that the price should not break the preceding consolidation, but should continue in the direction of the main trend building the move up after each consolidation. When it breaks the latter one, then we should see if there will be a consolidation after a down move to confirm the reversal.

Ultimately the drop should retest the former bottom of $26.1 to complete the structure.

Please leave your comments below sharing your thoughts about the oil price future.