Hello traders everywhere. The news was delivered Friday with better-than-expected U.S. jobs report that eased market fears that the economy was slowing down. The DOW traded 30 points higher, the S&P 500 climbed .35% as the energy and consumer discretionary sectors outperformed and the Nasdaq advanced 0.5% mid-day. On a weekly basis, the three major indexes performed extremely well posting weekly gains of +1.9%, 1.97%, and +2.6% respectively.

The U.S. economy added 196,000 jobs in March, according to data released by the Bureau of Labor Statistics. Economists polled by Dow Jones expected a print of 175,000. However, wage growth expanded 3.2%, below an expected gain of 3.4%. 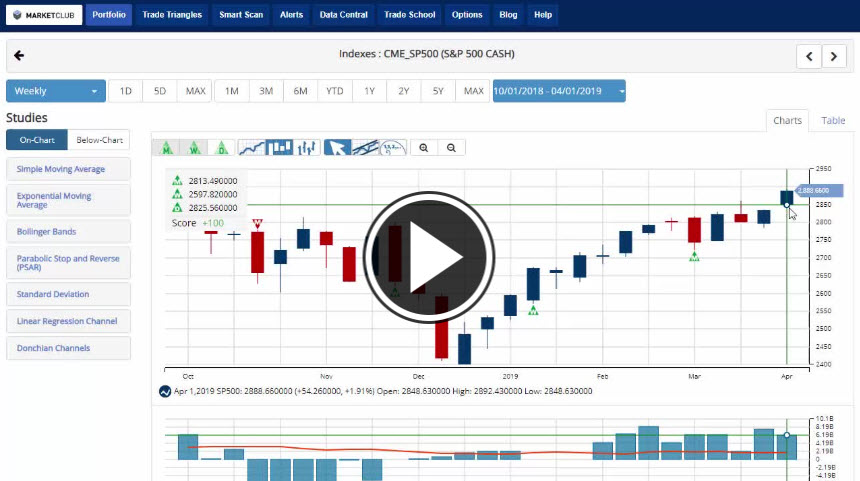 The U.S. dollar triggered a new green weekly Trade Triangle today at $97.45 once again pausing the Chart Analysis Score to +100 and butting up against a major level of support. The dollar has traded above the $97 level 13 times on a weekly level since October of 2018 but has been unable to break through $98 each time. Will the recent push higher give the dollar a different result?

Crude oil continues to impress posting a weekly gain of +3.9%, but daily trading has tailed off at the end of the week sitting at the $62 level. The recent daily decline is most likely due to economic and trade jitters along with news that Saudi Arabia has threatened the United States to stop using dollars for its oil trades in an attempt to discourage legislators from passing a bill dubbed NOPEC aimed at holding OPEC liable for cartel practices under U.S. law.

Gold futures issued a new red monthly Trade Triangle signaling a change in the long-term trend. It's not shocking that gold would move lower with the dollar heading higher. Gold traded below its 100-day MA for the first time since Nov. 2018 this week, if gold fails to break back above that level in the next week it could test its 200-day MA standing at $1,268.00

Bitcoin pushed higher this week posting a weekly gain of +22% and has been able to maintain that momentum by trading right above the $5000 level. The cryptocurrency finally broke above its 200-day MA with the huge Tuesday move, which now becomes a level of support standing at $4594. It Bitcoin can continue to trade above this level we could see a bullish move higher.