The Energy Information Administration released its Short-Term Energy Outlook for April, and it shows that OECD oil inventories likely bottomed last June at 2.806 billion barrels. It estimated stocks fell by 18 million barrels In March to 2.829 billion, 23 million barrels higher than a year ago.

However, throughout 2019, OECD inventories are expected to rise rather quickly through November. At year-end, EIA projects 2091 to be with 2.915 million barrels, 53 million more than at the end of 2018.

For 2020, EIA projects that stocks will build another 70 million barrels to end the year at 2.985 billion. That would push stocks into glut territory. 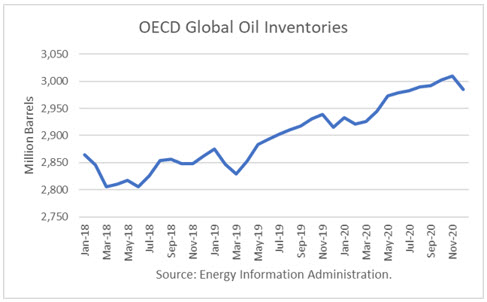 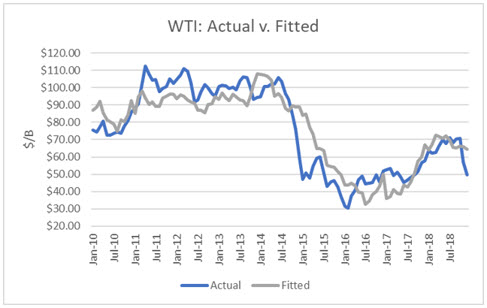 I used the model to assess WTI oil prices for the EIA forecast period through 2019 and 2020 and compared the regression equation forecast to actual NYMEX futures prices as of April 8th. The result is that oil futures prices are presently undervalued until May 2019. It also shows that crude oil prices should have peaked for 2019 and 2020. (More below on the uncertainties of a single projection.) 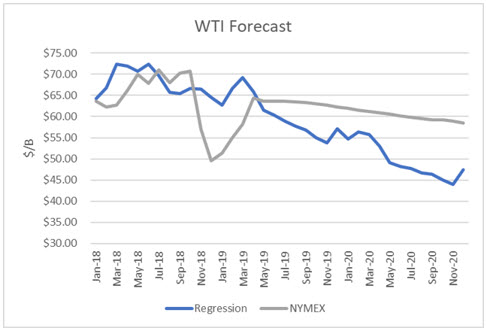 The 4Q18 proved that oil prices could move dramatically based on expectations. President Trump granted waivers to eight countries to continue to buy Iranian oil, and traders had been betting that a supply crisis would ensue.

Iran stands out as another uncertainty. In early May, the Trump Administration has to decide whether or not to extend those waivers. Three of the countries did not use the waivers, and so their waivers will probably be terminated in a “show” that the Administration is getting tougher, even if it does not translate into lower Iranian exports. It is also possible that waivers to the other five may be trimmed.

Venezuela remains a key uncertainty. It was reported that production was cut by 250,000 b/d in March to 840,000 b/d as the economic crisis in that country deepens. Though the U.S. no longer imports crude oil from there, its impact is felt in world markets.

Saudi Arabia appears to be single-handedly implementing the production cuts for both OPEC and non-OPEC countries. Its production was reported at 9.85 million barrels per day for March, down 870,000 b/d from the October base. Recent reports peg Saudi output more recently at 9.2 million.

According to Saudi Energy Minister Khalid Al-Falih, May will be key to determining whether to extend the production cuts for the second half of 2019. Russian President Putin stated that Russia opposes an “uncontrollable rise in oil prices.”

Finally, President Trump has once again tweeted that oil prices have become too high. He could order a drawdown of the U.S. Strategic Petroleum Reserves at any time. He could also negotiate an end to sanctions against Iran if he gets the concessions he wants. And he could publicly back the NOPEC legislation which would break-up OPEC.

Based purely on the model, oil prices have likely peaked. However, it could take some key catalyst to cause them to break as they did in 4Q19.

President Trump is capable of providing such a catalyst. The question is if and when he will do so.

One thought on “World Oil Supply And Price Outlook, April 2019”