Hasbro (HAS) is turning the corner and going on the offensive with a slew of revenue verticals with its Disney toy licensing deal (Marvel, Star Wars and Disney Princess lines), Hasbro Studios (Transformers’ Bumblebee, My Little Pony, Power Rangers), E-Sports (Dungeons and Dragons and Magic: The Gathering) and reinventing its legacy games (Monopoly and Nerf) while driving newer products (Beyblades). Hasbro blew out expectations for its Q1 2019 earnings and the stock jumped 16% breaking out above the $100 threshold, a level that hasn’t been seen in over 6 months. Hasbro is setting the post-Toys-R-Us bankruptcy narrative and laying out a business roadmap for long term profitable growth across its brands. Hasbro has had the tough task of getting out in front of the Toys-R-Us bankruptcy and working its way through the glut of merchandise. This positive sentiment has been further bolstered by positive commentary from its CEO that the company has effectively absolved itself of the Toy-R-Us related bankruptcy headwind. Hasbro has a compelling future across its portfolio with many catalysts on the near and long term time horizons.

“The global Hasbro team is executing very well and delivered a good start to the year,” said Brian Goldner, Hasbro’s chairman and chief executive officer. “Our long-term investments in new platforms provided a meaningful contribution from our digital and e-sports initiative, Magic: The Gathering Arena, as well as growth in MAGIC: THE GATHERING tabletop revenues. In addition, MONOPOLY, PLAY-DOH and TRANSFORMERS were among the brands posting revenue gains this quarter. We are beginning to see improvement in our commercial markets, notably in the U.S. and Europe, and operating profit was driven by high margin revenue growth and our cost savings activities. With most of the year ahead of us, we remain on track to deliver profitable growth for the full-year 2019.”

“In addition to executing on the top-line, our team remains focused on implementing the cost savings initiatives we announced last year,” said Deborah Thomas, Hasbro’s chief financial officer. “We continue to expect full-year net cost savings of $50-$55 million, as we announced in February. Our balance sheet is strong and we continue investing in areas intended to drive long-term profitable growth.” 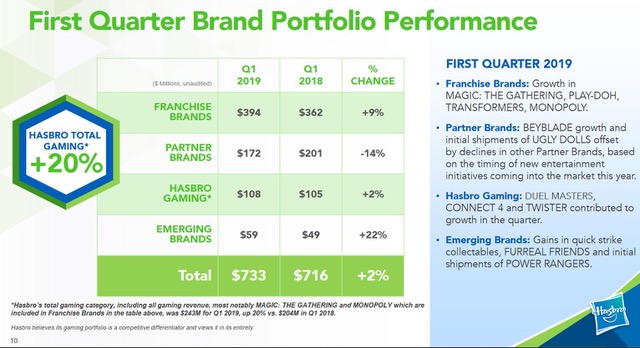 After Hasbro (HAS) reported it Q4 2018 earnings and full year numbers, Brian Goldner was interviewed on Mad Money with Jim Cramer.

Per Goldner, the first fiscal quarter of 2019 will be the last investors hear of the Toys-R-Us woes as Hasbro finally annualizes the last quarter in which it shipped Toys-R-Us product.

"Brands that had been supported for years by Toys-R-Us clearly were impacted," "We see it as a disruption and an interruption in our growth, but as we go forward, we're absolutely confident that we get back to the growth trajectory that we had been on over a number of years," Goldner said.

"The industry has been growing over the last number of years. Obviously, it went backward last year," he said. "As we move forward, 2019 is all about growth and expansion of operating profit margin, new initiatives and innovations, an incredible entertainment slate led by our own brands."

The path was laid out by Goldner and based on its Q1 numbers; we can see that this sentiment has come to fruition. He laid out a compelling growth path post-Toys-R-Us overhang moving into 2019.

Hasbro (HAS) continues to return shareholder value via a combination of dividends and share repurchases. The company paid out $79.3 million in dividends to shareholders during the first quarter of 2019. During Q1, Hasbro repurchased 579,174 shares of common stock at a total cost of $49.2 million and an average price of $84.90 per share. As of the end of Q1, $378.8 million remained available in the current share repurchase authorization. Hasbro remains committed to its shareholder-friendly capital allocation as it raised its dividend payout last quarter while shrinking the share count.

Hasbro is now on the offensive and appears to have turned the corner with regard to the Toy-R-Us liquidation and the inventory glut that resulted. Hasbro has worked through the inventory overhangs and disruption to its supply channels. To this end, Hasbro has signed exclusives with Wal-Mart, Target and Amazon while building out its direct to consumer channel to mitigate and recapture the market share that was lost. Goldner said that after Q1 2019, investors will no longer hear about the Toys-R-Us headwinds impacting the company and sure enough the Q1 numbers delivered huge beats on both the top and bottom line. The company has many growth catalysts on the short and long-term horizon via the diversity of its portfolio and partnerships, e-sports, new Power Rangers acquisition and Hasbro Studios. 2019 is shaping up to be an inflection point for the company as it places the Toy-R-Us bankruptcy in the rearview and propels its business into the future with durable and compelling brands.

Check out my previous articles on Hasbro here, here and here.

Disclosure: The author does not hold shares of IBM, but he does engage in option selling in any of the mentioned underlying stocks or ETFs. The author has no business relationship with any companies mentioned in this article. He is not a professional financial advisor or tax professional. This article reflects his own opinions. This article is not intended to be a recommendation to buy or sell any stock or ETF mentioned. Kiedrowski is an individual investor who analyzes investment strategies and disseminates analyses. Kiedrowski encourages all investors to conduct their own research and due diligence prior to investing. Please feel free to comment and provide feedback, the author values all responses. The author is the founder of stockoptionsdad.com a venue created to share investing ideas and strategies with an emphasis on options trading.