The Energy Information Administration released its Short-Term Energy Outlook for May, and it shows that OECD oil inventories likely bottomed last June at 2.806 billion barrels. It estimated that stocks rose by 20 million barrels in April to 2.860 billion, 51 million barrels higher than a year ago.

Throughout the balance of 2019, OECD inventories are expected to rise modestly. At year-end, EIA projects stocks at 2.870 million barrels, 11 million more than at the end of 2018.

For 2020, EIA projects that stocks will build another 35 million barrels to end the year at 2.905 billion. The non-extension of waivers to Iran’s sanctions implies lower OPEC output for the period, and this factor has lowered the EIA’s stock forecast materially. 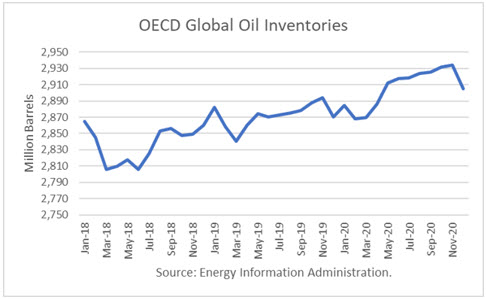 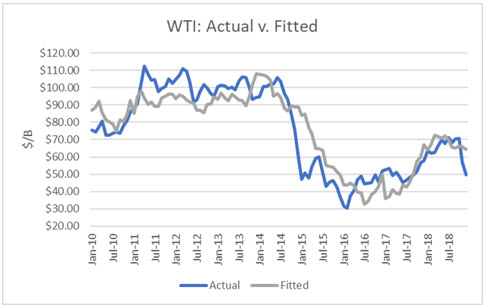 I used the model to assess WTI oil prices for the EIA forecast period through 2019 and 2020 and compared the regression equation forecast to actual NYMEX futures prices as of May 7th. The result is that oil futures prices are modestly undervalued until May 2020. But it also shows that crude oil prices should have peaked for the period 2019 to 2020. (More below on the uncertainties of a single projection.) 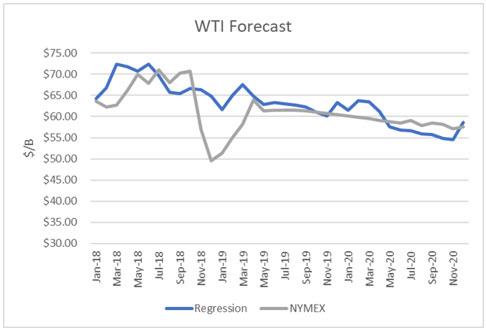 The sanctions waivers to buy Iranian crude oil were not renewed, effective May 2nd, as previously announced. And now the market is assessing how much Iranian will be exported and how much of any loss will be compensated for by Saudi Arabia and the UAE.

The initial report is that Saudi Aramco is indeed scheduling additional exports to Asian customers who want them. The most recent estimate of Saudi production for April was 9.9 million barrels per day, and so it certainly can meet a shortfall in Iranian exports. And Saudi Energy Minister Khalid Al-Falih stated that the Saudi policy is to keep the oil market well-supplied.
An uncertainty is whether Iran will react to the sanctions in some way to destabilize the region. However, another possibility is that it may try to negotiate an exit to the sanctions regime due to the crippling effect they are having on its economy. If the latter case materializes, the expected impact of Iranian exports returning would be highly bearish.

Venezuela remains a key uncertainty as the political and economic crisis in that country deepens. It appears to be only a question of time before the Maduro regime will end, but there is no telling how long the end may be prolonged and what state the oil industry will be in at the end.

When the crisis does end, I expect PDVSA to be able to attract outside help, assuming the new administration is friendly. It will be a question of how quickly or long it will take for production to be restored.

The sanctions on two OPEC members at the same time has taken much of OPEC’s surplus capacity off of the market. Right now it appears that OPEC is solely Saudi Arabia and the UAE in terms of adjusting production to influence prices. As such, they do not need the OPEC agreement to continue beyond June because they can adjust their output as they choose without being bound by an agreement.

For the time being, it appears futures prices are reasonably valued, according to the model. It might take a major development in either the Iran or Venezuela stories to significantly change that.

2 thoughts on “World Oil Supply And Price Outlook, May 2019”