Disney (DIS) has broken out to all-time as their growth initiatives are beginning to bear fruit with Wall Street embracing its growth strategy and rewarding shares with a higher price-to-earnings multiple. Disney is firing on all cylinders; posting one record-setting blockbuster after another, wrestling away full ownership of Hulu, launching a branded streaming service, record revenue numbers via pricing power at its Parks and Resorts and remediation of its ESPN franchise with ESPN Plus. Disney’s Avengers: Endgame is taking the torch beyond the $2 billion box office milestone, a feat that’s only been accomplished four times, one of them being Avengers: Infinity War last. Endgame has its sights set on surpassing Avatar as the highest grossing movie of all-time. All the initiatives that Disney has taken over the previous few years to restore growth appear to be coming to fruition, namely it's Fox acquisition, and it's streaming initiatives. Disney continues to invest heavily into its streaming services (Hulu, ESPN Plus, and its Disney branded streaming service) to propel its growth and presence within this space. ESPN Plus launched less than a year ago and already has over 2 million subscribers. The company is evolving to meet the new age of media consumption demands of the modern consumer via streaming and on-demand content. I’ve been behind Disney for a long time, especially through this transition back to growth when the stock traded below $100 and I still feel that the company offers a compelling long-term investment opportunity given its growth catalysts that will continue to bear fruit over the coming years. However, given that the shares are at all-time highs in the backdrop of the longest bull market in history, caution is prudent.

“Isn’t this fantastic?” Iger said as he came out in front of the full-scale Millennium Falcon. “I have been in this job for 14 years. There are some good days, but this is right up there with the best of them.”

Iger started “I’m sure many of you fantasized” about being in a land like Galaxy’s Edge. He also confessed, “I always wanted to sidle up to the bar at the cantina or pilot the Millennium Falcon. Now we can do all of that, and so much more.”

“Now the technology is here, this thing is amazing,” Lucas said. “It’s something you couldn’t even dream about 20 years ago. It was a great experience for me, and it will change your life.”

The new attraction is garnering fantastic reviews and will funnel massive foot traffic while driving Star Wars related merchandise sales within the park. Disney possesses great pricing power at its Parks and Resorts, and this attraction will further boost its ability to drive margins higher. 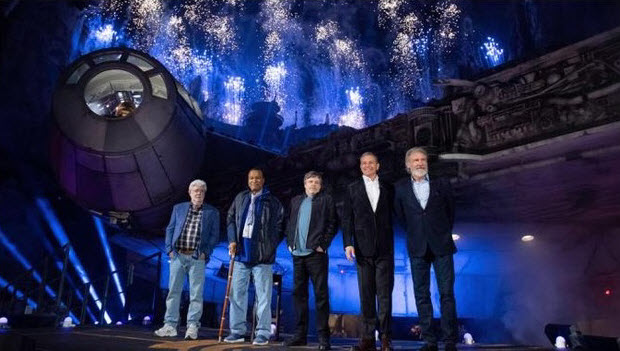 Hulu will finally be a wholly owned asset of Disney now that Comcast has agreed to sell its stake in Hulu in five years (2024). Disney will take full operational control of Hulu, effective immediately and Comcast will give up the voting rights immediately as well.

Taken together, Disney will take total control of the streaming service, after it bought out Fox's share while WarnerMedia sold its 10% back to Hulu, leaving Comcast as the only non-Disney owner. Comcast could sell its remaining stake at a total-company valuation of $27.5B or whatever Hulu is appraised at in five years. Comcast is guaranteed $5.8 billion for its Hulu stake.

“Hulu represents the best of television, with its incredible array of award-winning original content, a rich library of popular series and movies, and live TV offerings,” Disney CEO Bob Iger said in a statement. “We are now able to completely integrate Hulu into our direct-to-consumer business and leverage the full power of The Walt Disney Company’s brands and creative engines to make the service even more compelling and a greater value for consumers.”

Disney’s future of streaming includes ESPN Plus which was launched in 2018 to a mixed skeptical reception among shareholders and consumers upon its debut. Due to precipitous declines in ESPN viewership via traditional cable, Disney was cornered to remediate its ESPN business and evolve to the cord cutting consumer. Recently, Disney announced a key milestone for its streaming platform, reaching over 2 million paid subscribers. Consumers are awaiting Disney's stand-alone streaming service in 2019, which will include Pixar, Marvel, Disney, Lucasfilm, and National Geographic content. Collectively, Disney’s streaming initiatives are bearing fruit, and as Bob Iger stated in a recent interview, its streaming efforts are a marathon, not a sprint.

Thus far in 2019, Disney continues its reign over the box office with its latest success via the live-action remake of the 1992 animated classic Aladdin, grabbing the top spot of the domestic box office during the U.S. holiday weekend, hauling in an estimated $112.7 million domestically. Globally, the movie brought has grossed over $500 million with its domestic haul surpassing $200 million.

Disney (DIS) hit first with Captain Marvel delivering a box office gross of $1.128 billion worldwide and $426 million domestically. Then the highly anticipated Avengers: Endgame broke through the elusive $2 billion mark to become only the fifth film to achieve that feat. The film has brought in $2.721 billion worldwide and $819 million domestically, beating Avatar on the domestic front while still slightly behind Avatar’s $2.788 worldwide gross. Toy Story 4, Lion King, Frozen 2 and Star Wars Episode 9 is Disney’s slate of films that will bode well at the box office as these films stand to rack in billions in box office receipts. It’s noteworthy to point out that Disney is poised to defend its box office dominance again in 2019 for the fourth consecutive year.

Disney has dominated the box office over a multi-year stretch due to successes across multiple brands such as Star Wars, Marvel, Pixar, and Disney Animation releases. Disney has held the most market share for the past three years by a wide margin. In 2016, 2017 and 2018, Disney’s studio captured 26.3%, 21.8% and 26% of the market share, respectively based on domestic box office gross. Disney’s studio is also the fastest to reach $1 billion in domestic box office gross and holds the three top fastest times. In 2016, 2017 and 2018, Disney achieved this mark in 128, 146 and 117 days, respectively, which are the three fastest on record. In 2018, Disney’s studio was the fastest ever to $1 billion in box office gross (117 days).

Disney has all-time high highs as its confluence of growth initiatives resonates with Wall Street. Disney is posting one record-setting blockbuster after another, wrestling away full ownership of Hulu, launching a branded streaming service, record revenue numbers via pricing power at its Parks and Resorts and remediation of its ESPN franchise with ESPN Plus. Avengers: Endgame and Disney’s robust film line-up for 2019 with a strong possibility of over a half dozen films that stand to rack in over a billion dollars at the worldwide box office. Avengers: Endgame is projected to be the highest grossing film of all time as its only million away from Avatar’s record. Aladdin will be followed by Toy Story 4, Lion King, Frozen 2, and Star Wars Episode 9. Disney is poised to defend its box office dominance again in 2019 for the fourth consecutive year. The Fox acquisition is under its belt and integration has begun while receiving a buy rating from Goldman Sachs with a price target of $142. Disney’s streaming initiatives via Hulu, ESPN Plus, and direct to consumer Disney branded streaming service are major catalysts moving forward. Disney offers a compelling long-term investment opportunity for the long-term investor; however, given that the shares are at all-time highs in the backdrop of the longest bull market in history, caution is prudent.