The title of my previous update was “Calm Before Storm”, and it was not “clickbait” as I spotted a telling market structure that appeared on the chart as a huge visible consolidation had emerged.

Indeed, a sharp move higher followed that post after the consolidation mentioned above had broken out. That move was strong enough to overcome the barrier of the potential triangle’s resistance above $1360. This has invalidated the second option (green arrows) of intermediate triangular consolidation on our master chart. As time goes by, the dust settles, and the chart structure gets clearer eliminating one option after another until only one single way to go remains.

The gold advanced as high as $1437 so far, let’s see how you felt the market one month ago. 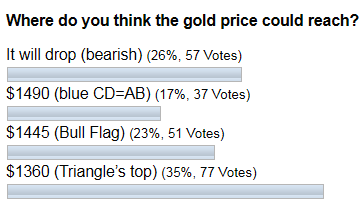 Most of you thought that the triangle’s top could stop the market at the $1360 level, but at the same time, you were optimistic about the gold move although a bit conservative. It is interesting that in second place, the votes were given to an opposite bearish scenario. This confirms the idea that market forces are struggling during consolidation, as trading opinions are polar. There is a Bull Flag’s target on the third place, and it is the closest result so far, my congratulations to those who hit that option.

I cleaned the master chart below for you to focus only on one option, and I extended the view there. 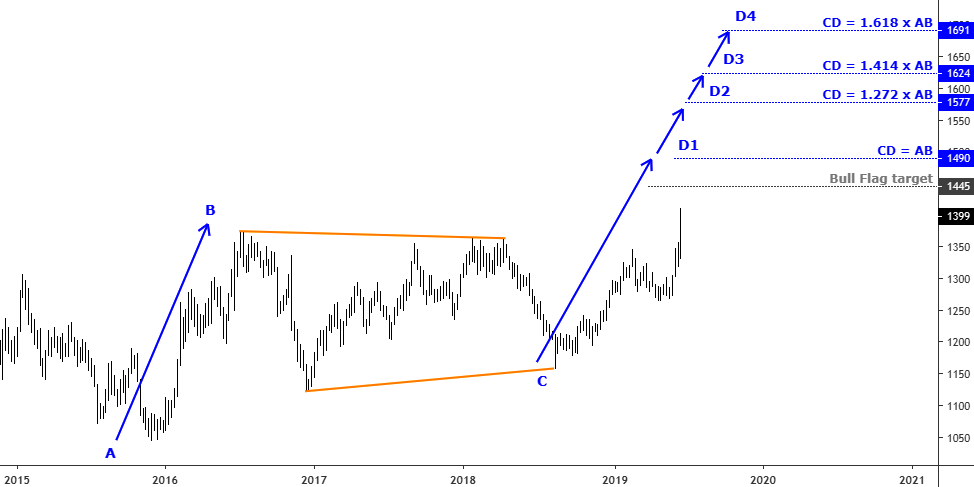 The first option finally played out. We are on the last move to the upside to complete the complex correction. This time I added extended targets as CD segment could get enough bullish impulse to stretch itself beyond the segments’ equality above $1490 (D1). I used Fibonacci ratios to map the extended targets. The D2 target is located at the distance of 1.272 of the AB segment at the $1577. The next is D3 target (ratio 1.414) at the $1624. And the last one, but not the least possible is the D4 (ratio 1.618), which is located at the $1691.

Let’s double check AB/CD segments with another approach below. 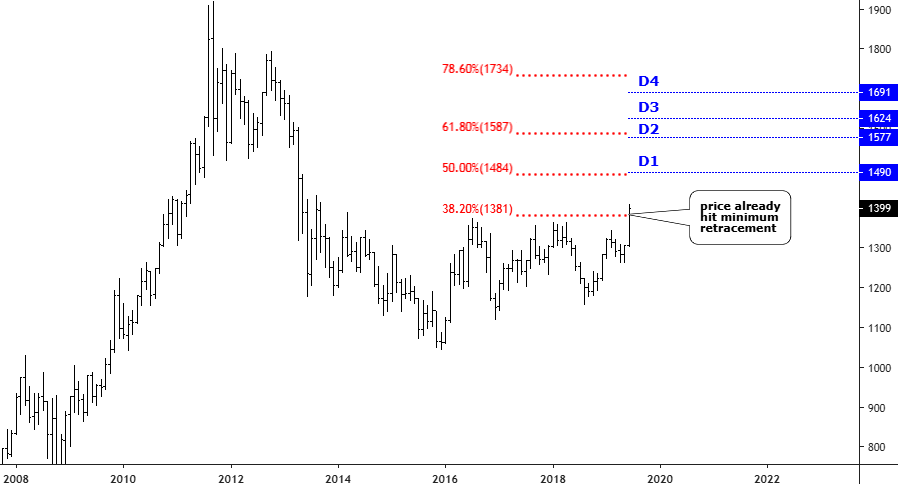 On the monthly chart above, I have added the Fibonacci retracement levels (red) to check the Fibonacci extension ratios (blue) through the depth of the current correction. I know, it sounds like a pun, but this classic approach is very simple yet effective.

The price has already hit the minimum retracement level of 38.2% above $1381. It means that the gold has entered the area of a potential reversal, although there are three more levels could be reached.

D1 target corresponds to the 50% Fibonacci retracement level ($1484) with a minor difference. D2 target almost perfectly matches with a 61.8% retracement level ($1587). D3 is located a little bit higher than the 61.8% level, but it is much lower than the next 78.6% level at the $1734. The D4 is also lower than that, but it is very close. Again, we could witness here the magic of the Fibonacci ratios as most of the levels correspond between each other.

These ratios appear quite frequently on the charts.

One thought on “Gold Bugs, How Deep Is Your Love?”