On one side you have the skeptics. That’s the large group of voices shouting that cannabis is the worst investment ever.

On the other side, you have the get-rich-quick crowd. That’s the group of people who are convinced that owning cannabis stocks for a few years is a quick path to riches and early retirement.

The truth usually lies somewhere in the middle – and that’s true for cannabis stocks.

I think cannabis stocks are a good investment. I also think the cannabis industry is in a position to see a big expansion in the next two years.

While that might not send cannabis stocks to the moon, I do expect it to deliver market-beating gains for the sector that could give your portfolio a very nice boost.

Cannabis Is Still Illegal in the U.S. – That’s a Good Thing for Investors

In a recent article from Kiplinger titled Buy Marijuana Stocks Now? You’d Have to Be Stoned, the author suggests that investors should avoid the sector because cannabis is still illegal on the federal level.

“Being illegal presents numerous other obstacles. If you’re producing or selling marijuana in the U.S., you’re violating federal law. Consequently, American marijuana companies can’t list on Nasdaq or the New York Stock Exchange. So they list on the Canadian Stock Exchange in Toronto and the OTC Markets Group in the U.S. where disclosure requirements aren’t nearly as strict as on the major U.S. exchanges. That presents significant challenges for investors who want to find reliable data on American marijuana companies.”

This is the wrong way to look at the U.S. cannabis sector. It’s actually a lot like driving a car while looking out the rear view window.

The fact that cannabis is still illegal on the federal level is actually the best argument why cannabis stocks are a good investment. That opportunity is all going to change within the next 24 months – and when it does the U.S. cannabis industry will soar.

That might seem like an overly optimistic forecast. However, the U.S. is very close to federal legalization.

For example, the STATES Act, a bipartisan bill introduced to Congress in April. would largely solve the conflicts between state and federal cannabis laws.

Also, medical cannabis is now legal in 33 states. Recreational cannabis is legal in 10 states. The trend is your friend and this map showcases the momentum of cannabis legalization. 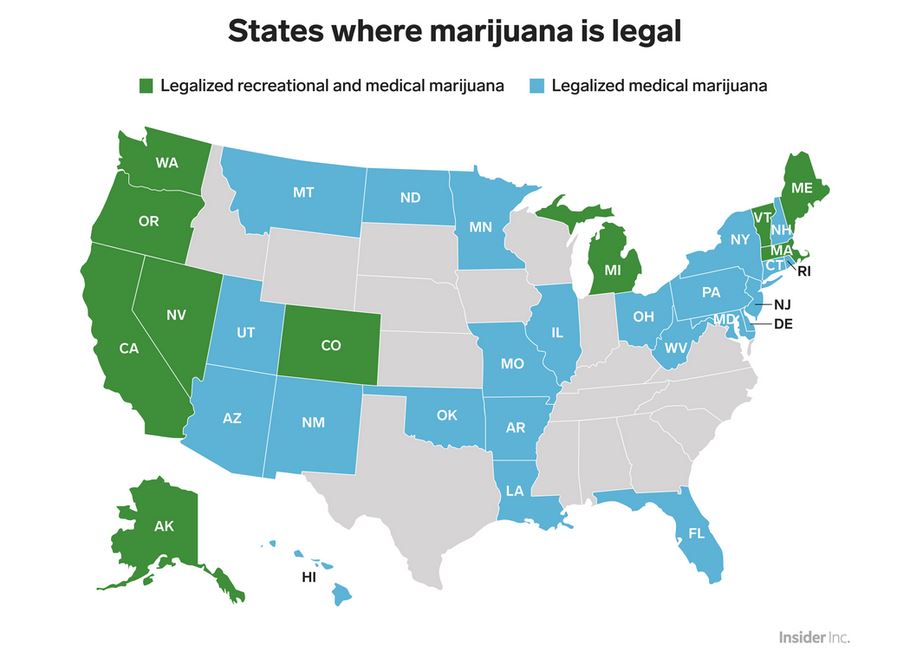 Finally, Mexico is on pace to legalize recreational cannabis this fall. This move would leave the U.S. as the only country in North America not to push legalization forward.

Legalizing cannabis at the federal level would give the U.S. cannabis industry an enormous boost by solving three of its biggest problems.

3 – Interstate operations and sales are currently banned: U.S. cannabis companies are forbidden to sell products across state lines. Eradicating this restriction would open hundreds of new markets to the biggest cannabis companies.

As you can see, the U.S. cannabis industry is being held hostage right now. The industry is unable to flourish due to highly restrictive federal regulations. The irony here is that these federal restrictions are exactly why I think cannabis stocks are such a good investment.

These laws are going to change – it’s only a matter of time. When it happens, U.S. cannabis companies will flourish. I expect well-positioned investors (like our Cannabis Stock Trades members) see market-beating gains for cannabis shareholders.