The Energy Information Administration released its Short-Term Energy Outlook for June, and it shows that OECD oil inventories likely bottomed last June 2018 at 2.804 billion barrels. It estimated stocks rose by 38 million barrels in May to 2.902 billion, 84 million barrels higher than a year ago. 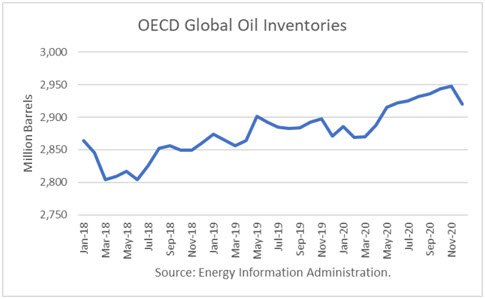 The EIA has revised its estimates for future OPEC production down significantly, given the sanctions on both Iran and Venezuela. For much of the balance of 2019 and 2020, it expects OPEC production to remain under 30 million barrels per day. U.S. shale is expected to capture market share from OPEC. 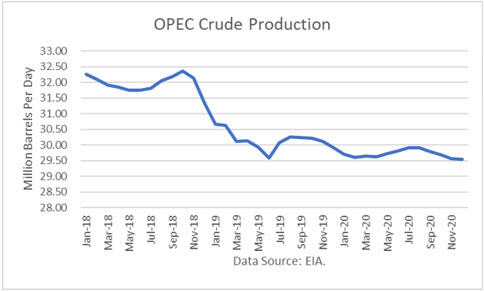 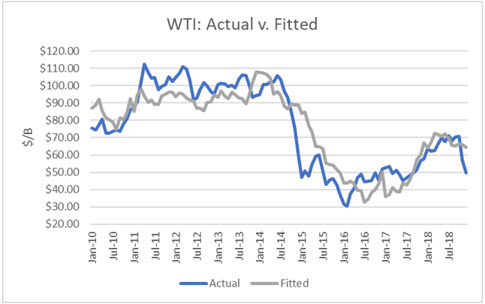 I used the model to assess WTI oil prices for the EIA forecast period through 2019 and 2020 and compared the regression equation forecast to actual NYMEX futures prices as of June 12th. The result is that oil futures prices are presently undervalued through November 2020. It shows that crude oil prices should be above $60 per barrel through April 2020.

After April 2020, it shows the valuations dropping down to where NYMEX futures prices are currently, in the low $50s. More below on the uncertainties of a single projection. 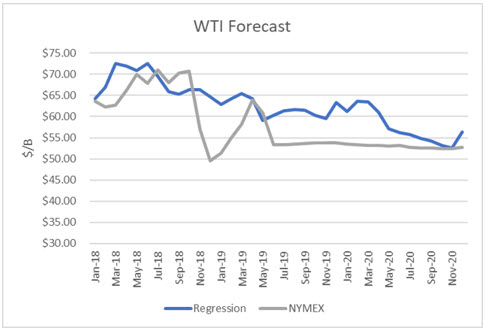 One key uncertainty is what OPEC+ will decide to do in the second half of 2019. It is clear that they need to continue the output restraint, and that they even need to cut further.
Saudi Arabia has cut its output to about 9.69 million barrels per day, far below its quota of 10.3 million. However, it appears Russia has not even met its quota. 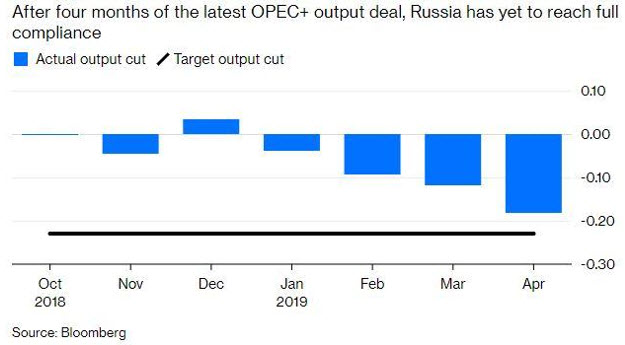 President Putin has said Russia is happy with oil prices around $60/b since its budget is about $40/b. However, Saudi Arabia needs oil prices in the $80s to balance its budget. Furthermore, President Trump wants to keep oil prices down to enable the economy to continue growing as the 2020 election cycle is about to begin.

One “surprise” he may have in mind is settling with Iran. Although the parties do not appear to be close publicly, there are back channels that are reportedly meeting to help broker a deal. And Trump has said recently that all he wants is for Iran not to build nuclear arms, and Iran has said that they are forbidden to build them by their clerical leaders. And so it seems a deal is possible if Trump actually wants one.

I think it is likely he will come to terms with Iran before the election because it would remove the sanctions and allow Iran to put about 2 million barrels per day into the market. In that event, oil prices would collapse.

Finally, Venezuela remains a key uncertainty. EIA estimated its production at 730,000 b/d for May, about 100,000 b/d lower than April. However, if and when a Western-friendly government takes over, reviving the oil industry will be a key goal and unlocks the potential to put another 2 million barrels a day into the world market.

Based purely on the model, oil prices are undervalued. OPEC production is in retreat, and the base case by EIA is that its production will remain below 30 million.
A settlement with Iran could spell disaster for oil prices. So I think Trump will do the deal if he can.