Disney (DIS) ran too far, too fast prior to its recent earnings announcement that fell short of investors' overzealous expectations this early in the company's transformation. Disney's growth rotation is still in its early stages with the remediation of its ESPN property and flurry of growth initiatives to meet modern-day media consumption trends via streaming. In the backdrop, the company continues to dominate the box office year after year with a long pipeline of blockbusters in the queue. Additionally, its Parks and Resorts continue to be a growth avenue with tremendous pricing power. Disney is going all-in on the streaming front and will inevitably acquire full ownership of Hulu, and the company is launching its Disney branded streaming service that will compete directly with Netflix. I've been behind Disney for a long time, especially through this transition back to growth when the stock traded below $100 and I still feel that the company offers a compelling long-term investment opportunity given its growth catalysts that will continue to bear fruit over the coming years.

"Our third-quarter results reflect our efforts to effectively integrate the 21st Century Fox assets to enhance and advance our strategic transformation". "I'd like to congratulate The Walt Disney Studios for reaching $8 billion at the global box office so far this year--a new industry record--thanks to the stellar performance of our Marvel, Pixar and Disney films. The incredible popularity of Disney's brands and franchises positions us well as we launch Disney+, and the addition of original and library content from Fox will only further strengthen our direct-to-consumer offerings."
- Bob Iger, CEO of Disney

Expectations were too high at this point in Disney's business transformation, and the realization of these financial benefits will require patience.

Disney has been nothing short of spectacular over the last four years at the box office. The company has released dozens of $1 billion-plus worldwide films across its franchises that include Marvel, Pixar, Star Wars and legacy Disney animation. Thus far in 2019, Disney has released six movies that have grossed over $1 billion at the worldwide box office (Captain Marvel, Avengers: Endgame, Lion King, Aladdin, Spider-Man: Far From Home and Toy Story 4). It's noteworthy to highlight Avengers: Endgame which has taken the crown from Avatar for the highest-grossing movie of all-time, bringing in $2.796 billion worldwide. Disney already has a half dozen films that have eclipsed the $1 billion mark, and it's highly likely that this number will increase with Frozen 2 and Star Wars Episode 9 coming out later this year. 2019 will cap off a four year run of being the number one studio in terms of box office gross (Figures 1 and 2). 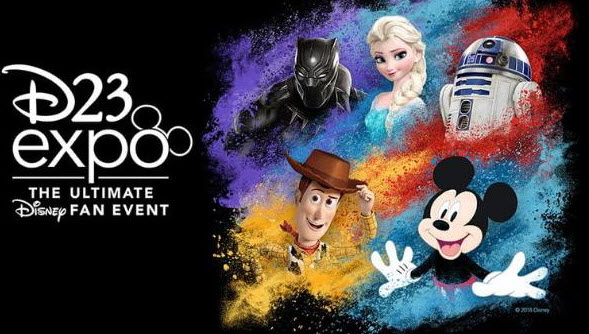 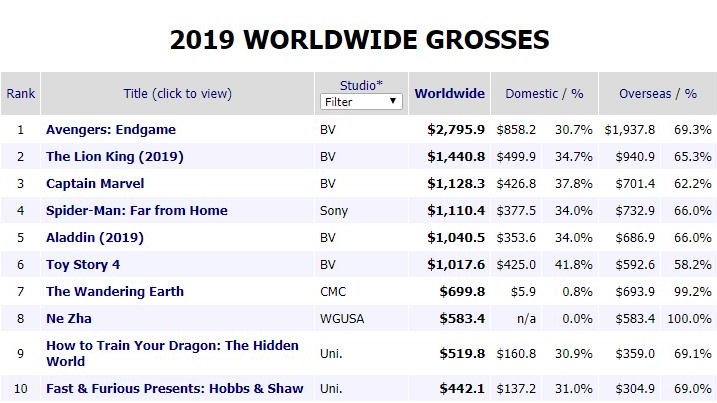 Disney has dominated the box office over a multi-year stretch due to successes across multiple brands such as Star Wars, Marvel, Pixar, and Disney Animation releases. Disney has held the most market share for the past three years by a wide margin. In 2016, 2017 and 2018 Disney's studio captured 26.3%, 21.8% and 26% of the market share, respectively based on domestic box office gross. Disney's studio is also the fastest to reach $1 billion in domestic box office gross and holds the three top fastest times. In 2016, 2017 and 2018 Disney achieved this mark in 128, 146 and 117 days, respectively, which are the three fastest on record. In 2018, Disney's studio was the fastest ever to $1 billion in box office gross (117 days).

It appears that Sony has pulled the plug on loaning Spider-Man to Disney to integrate the character into the Marvel Cinematic Universe. The Spider-Man ownership structure is nebulous, to say the least. Sony owns the movie rights to the Spider-Man character however in 2015 Disney, Marvel Studios and Sony agreed to share the Spider-Man film rights. That deal had brought Marvel Studios chief Kevin Feige on to lead creative production on Sony's Spider-Man films. Sony would continue to own, finance, and distribute the Spider-Man films where Spider-Man is the main character and Disney would distribute the ones where he is not. Disney's Marvel was receiving 5% of the film's revenue when Sony was behind the financing and distribution of the main films.
The previous partnership had been great for both studios. The character made an appearance in Captain America: Civil War in 2016, and then 2017's Spider-Man: Homecoming brought in Marvel character Iron Man/Tony Stark and grossed $880 million worldwide. This recent Spider-Man: Far From Home has just become Sony's all-time highest-grossing film. Disney requested that future Spider-Man films be a 50/50 co-financing deal, and Sony rejected. The previous deal had Marvel producing the films in exchange for all the merchandise revenue. Hence the convoluted ownership structure, Disney owns the Spider-Man lucrative merchandising rights however Sony owns the movie rights of the character.

Hulu will finally be a wholly-owned asset of Disney now that Comcast has agreed to sell its stake in Hulu in five years (2024). Disney will take full operational control of Hulu, effective immediately and Comcast will give up the voting rights immediately as well. Taken together, Disney will take total control of the streaming service, after it bought out Fox's share while WarnerMedia sold its 10% back to Hulu, leaving Comcast as the only non-Disney owner. Comcast could sell its remaining stake at a total-company valuation of $27.5B or whatever Hulu is appraised at in five years. Comcast is guaranteed $5.8 billion for its Hulu stake.

"Hulu represents the best of television, with its incredible array of award-winning original content, rich library of popular series and movies, and live TV offerings," Disney CEO Bob Iger said in a statement. "We are now able to completely integrate Hulu into our direct-to-consumer business and leverage the full power of The Walt Disney Company's brands and creative engines to make the service even more compelling and a greater value for consumers."

Disney's future of streaming includes ESPN Plus which was launched in 2018 to a mixed skeptical reception among shareholders and consumers upon its debut. Due to precipitous declines in ESPN viewership via traditional cable, Disney was cornered to remediate its ESPN business and evolve to the cord-cutting consumer. Recently, Disney announced a key milestone for its streaming platform, reaching over 2 million paid subscribers. Consumers are awaiting Disney's stand-alone streaming service in 2019, which will include Pixar, Marvel, Disney, Lucasfilm, and National Geographic content. Collectively, Disney's streaming initiatives are bearing fruit, and as Bob Iger stated in a recent interview, its streaming efforts are a marathon, not a sprint. These streaming properties will add a layer of durable, recurring revenue for the company for years to come while addressing the cord-cutting and ESPN losses.

Investor sentiment had gotten too far ahead of the stock moving into Q3 earnings, and as a consequence, the numbers fell short of analysts' expectations. Despite the significant sell-off post-Q3 earnings, all the initiatives that Disney (DIS) has taken over the previous few years to restore growth appear to be coming to fruition, namely it's Fox acquisition, and it's streaming initiatives. Disney continues to invest heavily into its streaming services (Hulu, ESPN Plus and its Disney branded streaming service) to propel its growth and presence within this space. The company is evolving to meet the new age of media consumption demands of the modern consumer via streaming and on-demand content. Disney's streaming initiatives via Hulu, ESPN Plus and direct to consumer Disney branded streaming services are major catalysts moving forward. Expectations were too high this early in Disney’s business transformation, and the realization of these financial benefits will require patience. Disney offers a compelling long-term investment opportunity for the long-term investor as the long term story remains intact.