The oil market is fixated on U.S. crude oil production. As shown in the EIA Weekly Petroleum Supply Report (see table below), domestic production averaged 12.107 million barrels per day in the year-to-date, up 14.6% v. the same period in 2018. 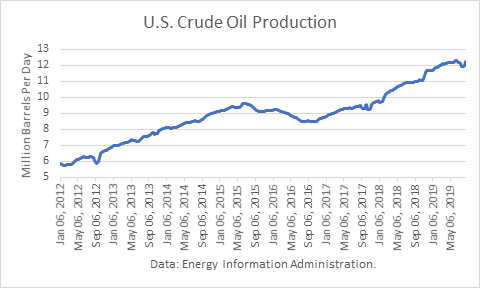 However, included within petroleum liquids supply is “Other Supply.” That figure is 6.885 million barrels per day in the year-to-date, up 8.9%, year-over-year. 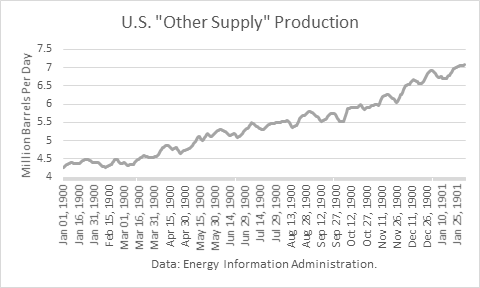 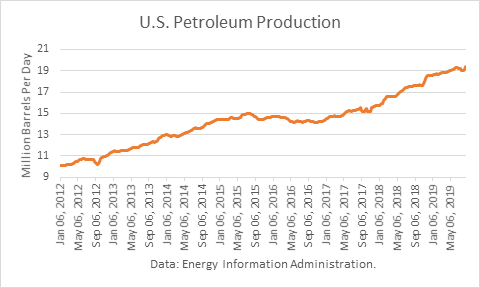 Why should they be combined?

The EIA includes these liquids as part of petroleum supply for a good reason. They are used in the manufacturing of petroleum products, including petrochemical feedstocks.

There are two categories of natural gas produced: "dry" gas and "wet" gas. Dry gas is almost exclusively methane, which is a chemical compound of one carbon atom and four hydrogen atoms (CH4).
Wet gas, by contrast, contains compounds like ethane and butane, in addition to methane. These natural gas liquids can be separated and sold on their own. Ethane is an organic compound which contains two atoms of carbon and six atoms of hydrogen (C2H6).

Ethane is most efficiently separated from methane by liquefying it at cryogenic temperatures. Various refrigeration strategies exist, the most economical process of which can recover more than 90% of the ethane in natural gas.

It can also be separated from petroleum gas, a mixture of gaseous hydrocarbons produced as a byproduct of petroleum refining. Further distillation then separates ethane from the propane and heavier hydrocarbons.

The chief use of ethane is the production of ethylene by steam cracking. Ethylene is widely used in the chemical industry. Much of this production goes toward polyethylene, the world's most widely used plastic. It is primarily used to make films in packaging, carrier bags, and trash liners.

Ethylene is also produced from just about all parts of higher plants, including leaves, stems, roots, flowers, fruits, tubers, and seeds. It has been used since the ancient Egyptians, who would gash figs in order to stimulate ripening (wounding stimulates ethylene production by plant tissues). The ancient Chinese burnt incense in closed rooms to enhance the ripening of pears.

In modern agriculture, ethylene is an important natural plant hormone, used during certain stages of growth such as germination, ripening of fruits, abscission of leaves, and senescence of flowers.

As with ethane, other chemical products are derived from petroleum or wet natural gas. Some chemical compounds can also be made from other fossil fuels, such as coal or natural gas, or renewable sources, such as corn or sugar cane.

The two most common petrochemical classes are olefins (including ethylene and propylene) and aromatics (including benzene, toluene, and xylene isomers). Olefins and aromatics are the building blocks for a wide range of materials, such as solvents, detergents, and adhesives. Olefins are the basis for polymers and oligomers used in plastics, resins, fibers, elastomers, lubricants, and gels.

Oil refiners produce olefins and aromatics by fluid catalytic cracking of petroleum fractions. Chemical plants also produce olefins by steam cracking of natural gas liquids such as ethane and propane. Aromatics are produced by the catalytic reforming of naphtha. Mixtures labeled naphtha have been produced from natural gas condensates, petroleum distillates, and the distillation of coal tar and peat.

Natural gas liquids are an integral part of liquid petroleum supplies. Non-crude inputs add several million barrels to refinery inputs and blenders. To ignore their production is viewing petroleum production too narrowly. Their production has been rising and is projected to continue to rise.

Besides Natural Gas Plant Liquids, EIA's "Other supply" includes renewable fuels, the largest of which is ethanol. Henry Ford thought biofuels were the "fuel of the future." He said that alcohol is "a cleaner, nicer, better fuel for automobiles than gasoline." Ford imagined America could grow its own fuel, making it out of everything, from potatoes to sawdust.

Ford's vision of mass biofuel consumption began with his Model T Ford. Starting in 1908, the Model T propelled Ford Motor Company (F) to become the largest producer of automobiles at the time. By 1918, over half of the cars in America were Model Ts.

From its original design, the Model T ran on ethanol as well as gasoline. The Model T had a knob right on the dashboard to adjust the fuel-air mixture for either alcohol or gasoline.
In the United States today, ethanol is blended with gasoline, contributing about 10% to the fuel supply. Ignoring ethanol's contribution to fuel supply is therefore incorrect.

The final category in "other supply" is refinery processing gain, the volumetric amount by which total output is greater than input for a given period of time. Technically, this is not another source of supply, but rather, is the result of the refining process. This difference is due to the processing of crude oil into products which, in total, have lower specific gravity than the crude oil processed.

In the EIA Annual Energy Outlook, the EIA forecasts U.S. crude oil and natural gas liquids (NGLs) production under various scenarios. In the reference case, the EIA projects crude plus NGLs are heading to 20 million barrels per day, more than double the production of Saudi Aramco (ARMCO). 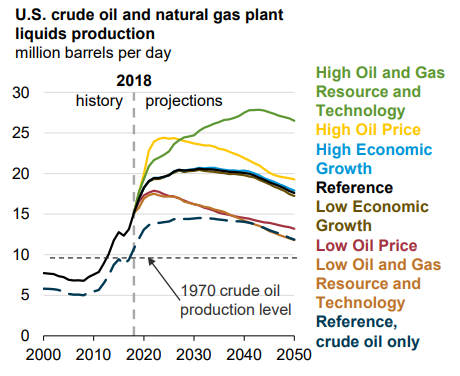 The media and analysts almost never mention the total crude production and other supply number, as if other supplies do not exist, when they are an integral part of U.S. petroleum supply. The combined total is at a record high, according to the latest EIA estimates, with no end to growth in sight.

Some point to oil rigs dropping and claim that means oil production will soon drop. But Harold Hamm, CEO of Continental Resources (CLR) has a different take. He stated on the conference call announcing 2Q19 earnings:

“We have also achieved the efficiencies throughout the first-half of 2019 that will allow the reduction of drilling rigs from 19 rigs in SCOOP STACK to 12 rigs on early fourth quarter of 2019. This 37% reduction in our southern rig fleet… I am proud that our teams can exceed production estimates with lower rig activity, that is operating and capital efficiency at its best… and I think we're probably 100 rigs more U.S. than is needed today.”