The OPEC ministers are scheduled to meet December 5th in Geneva. Their non-OPEC partners will join them December 6th. As of this writing, reports are that Russia and Saudi Arabia are not yet pushing for deeper cuts in 2020 are likely to call for full compliance by all OPEC+ participants and extend the existing quotas scheduled to end in March through June.

However, developments in non-OPEC countries may require deeper cuts to prevent glut conditions. And a couple of surprises within OPEC may doom the group’s efforts. Saudi Aramco is promising a dividend payment to IPO shareholders in proportion to a $75 billion dividend for all Aramco shareholders and will pay the new shareholders their due regardless if it is unable to pay the government its share of the dividend in full. Therefore, the Kingdom may be faced with a major financial challenge in 2020. 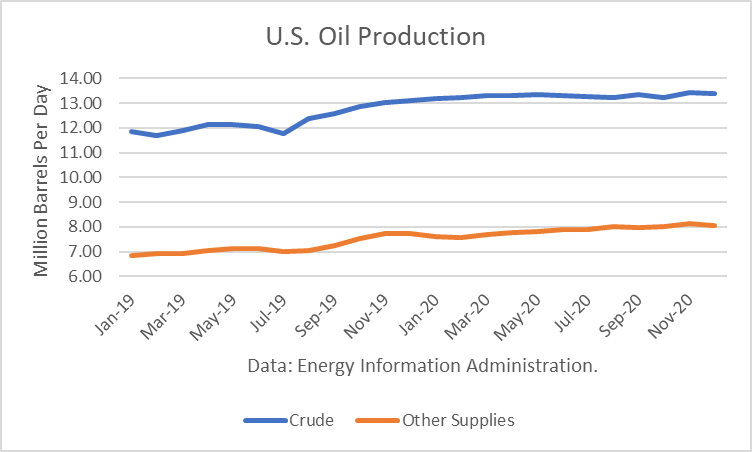 The International Energy Agency (IEA) is projecting a US increase in crude production of 1.2 million. But Goldman Sachs revised its forecast down to 600,000 b/d. And HIS Markit is even lower at 440,000 b/d.

But demand growth projections have also been revised lower than the consumption has been growing. The Energy Dept. is looking for growth of 1.37 million barrels per day, but the IEA has revised its rise to just 980,000 b/d.

Much of the world’s production gains have been in the U.S. and, more specifically in the Permian Basin. However, in 2020, supplies in several more countries may even exceed U.S. gains of they are at the lower end of estimates.

Brazil’s offshore production potential is scaling-up. Production has climbed about 300,000 b/d, and total liquids have increased by 480,000 b/d year-over-year in August to a record 3.1 million barrels per day, an all-time high, with crude oil rising by 220,000 b/d in August. The IEA expects Brazilian output to rise to 3.22 million b/d by the end of 2019, and the South American country is expected to increase output by another 460,000 b/d by the end of 2021.

In Norway, the giant Johan Sverdrup offshore oilfield started producing October 5th, ahead of schedule and under budget. Its capacity in 2020 is rated at 440,000 b/d by the summer, but it is ramping up more quickly than predicted. Equinor now expects it to reach 400,000 b/d in December. And its expected operating cost at less than $2/b, thanks to power from the onland electrical grid, which uses hydropower from 937 dams.

First oil from Guyana is projected in December. It will take about three months to reach first phase production of 120,000 b/d. Apart from focusing on shale oil in the Permian Basin, ExxonMobil’s biggest growth area is Guyana.

Furthermore, additional gains are expected in all three countries in 2021. OPEC is looking at a declining market for its oil unless demand gains a very robust.

In addition, there could be surprises next year from two OPEC producers who are subject to U.S. sanctions that have curtailed supplies. It is possible that the U.S. and Iran could reach an agreement which would result in the lifting of sanctions. Since 2020 is a U.S. presidential year, President Trump is motivated to make a deal which would give him a foreign policy win, and at the same time result in a flood of Iranian oil, which would like drive gasoline prices lower as voters decide on who to elect in November.

And Venezuela may surprise by lifting its production in 2020. PDVSA has budgeted for a 600,000 b/d increase next year. It may get help from Rosneft that could turnaround its faltering oil industry.

Russia has signaled that it is not interested in participating in deeper cuts. And so the burden for additional cuts will likely fall solely on Saudi Aramco. It will have to reduce its production to the low 9s and potentially much lower. At the same time, it will be on the hook to provide the full dividend payment to its new shareholders.

Reports are that there is no international demand for the Aramco IPO beyond the Gulf area. And as it appears, market conditions will deteriorate further in 2020. And so, Aramco’s plan for an international listing for the IPO appears doomed.