The narrative a while back was that the world would face a shortage of heavy crude because sanctions on Iran and Venezuela had reduced production and exports. Some also implied that shale oil would fill up U.S. storage because American refiners were designed to process the heavy, high sulfur crudes from Venezuela, Saudi Arabia, and the like.

But the light, sweet crude is in high demand for export, and that appetite is likely to continue to grow with the implementation of IMO 2020 around the corner, going into effect January 1st. Freight rates from the U.S. Gulf to Europe have surged to record highs.

Equinor ASA and Unipec, the trading arm of China's top refiner Sinopec, have provisionally chartered Aframax tankers for $60,700 per day, an increase of almost 30 percent in a week, a new record high, according to shipbroker Poten & Partners. Aframax tankers are the “workhorse” of the U.S.-Europe oil trade, which has risen more than 60 percent in 2019 compared to 2018.

The EPIC pipeline began service in August. It has the capacity to deliver 400,000 b/d from the Permian Basin to terminals on the Gulf Coast.

The new Cactus II pipeline system also started shipping crude oil in August. It has the capacity to deliver 670,000 b/d of crude oil from the Permian.

And the Gray Oak pipeline began service in November and will be capable of delivering 900,000 b/d at capacity.

This new takeaway capacity will effectively reduce the production breakeven costs of substantial Permian crude oil because the pipeline charges are significantly lower than trucking costs.

This should provide stimulus to shale oil production growth, which had slowed due to takeaway pipeline capacity constraints. 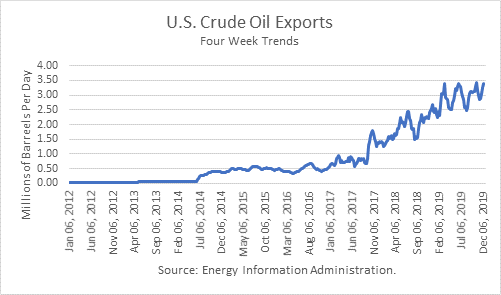 Exports of crude oil and petroleum products have surged to almost 9 million barrels per day. This makes the United States the largest petroleum exporting country in the world. 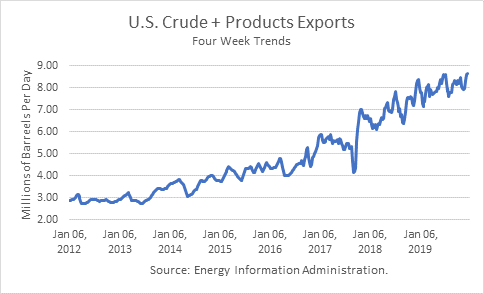 Net oil imports have recently dropped below zero, making the U.S. a net oil exporter for the first time in modern history. As a result, the U.S. economy is no longer vulnerable overall to a spike in oil prices, though such a development would hurt consumers while helping domestic oil producers. 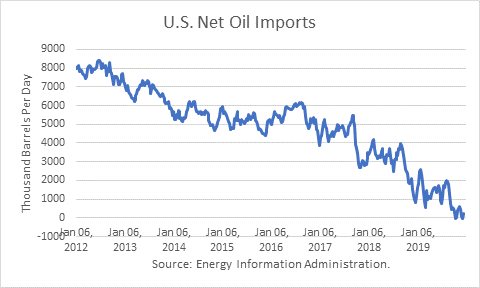 The U.S. balance of payments and trade would not be adversely impacted. This is a positive tailwind for the value of the U.S. dollar.

It also has political and defense spending implications. For example, following the attacks on Saudi Arabia in September, President Trump did not put the U.S. military at risk to defend KSA. He also did not counter-attack Iran on behalf of Saudi Arabia. The Crown Prince of Saudi Arabia reportedly began talks with Iran to defuse the situation, something the Kingdom did not have to try when the U.S. felt obligated to protect its oil supply for economic reasons.

The U.S. shale revolution is being re-booted by the opening up of new pipes in the second half of 2019. Given strong foreign demand and lower effective breakeven costs, a new surge may be in the works. Market observers who saw growth slowing may be in for a wake-up call over the coming six months when the new economic conditions take hold.

One thought on “American Shale Oil In High Demand”