This is a standard monthly chart above with a virtue of simplicity. I shared it with you last August when the price hit the first target of $1490.

Gold is still in a significant pullback that consists of two legs up. The second target coincided with a contact point of the second leg of a pullback around the $1580 mark. Besides that, it amazingly intersected with a 61.8% Fibonacci retracement level and moreover, it was between the 1.272 and 1.414 Fibonacci ratios for the second leg.

The question is whether it was enough for this pullback to unfold as it perfectly retested the broken orange trendline and reached the critical 61.8% Fibonacci retracement level. The future will tell it for sure. In the summer of 2016, we already saw how the price managed to throw over the broken trendline by almost $80 when the first leg to the upside unfolded. Such a jump could be enough to reach targets #3 at 1.414 ratio ($1624) and #4 at 1.618 ratio ($1690).

The RSI has shown the first alarming signal. The recent rally didn’t establish a new high for this indicator as it did on the price scale. The month is yet to finish, so watch it carefully to see if gold can update the indicator’s maximum. The RSI divergence is not the selling signal itself; it just warns us of an upcoming change in the trend. Another price maximum could still be established ahead of a reversal to make the divergence more visible as long as RSI is above 50.

Let’s continue in the weekly chart for more details. 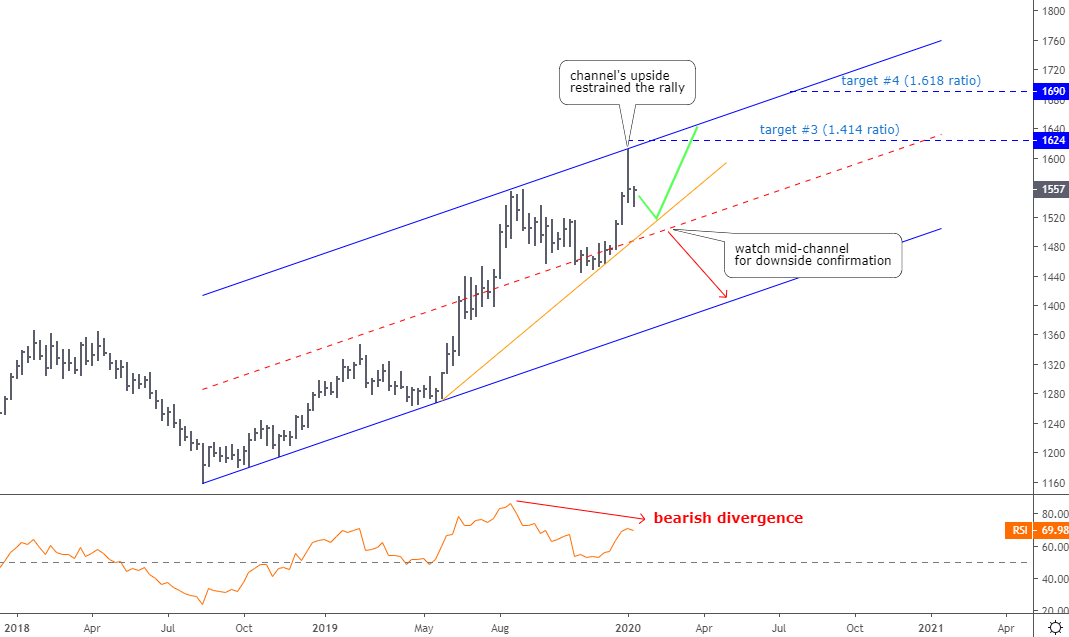 This weekly chart perfectly displays the power of the trends. As we can see, the upside of the blue uptrend channel restrained the recent gold rally to the tick as the price reversed right on the line.

I added targets #3 and #4 on the chart for you to visually feel the possibility of the gold price to hit it. In my opinion, the overall structure of the whole second leg of pullback, which is contoured with a blue uptrend channel, has more chances to reach target #3 rather than target #4.

Currently, the price is in a correction, which could reach the orange trendline support in the $1515-1520 area. And then, the last move up fueled with euphoria could break out to reach the target #3 (green zigzag) to exhaust there.

I switched on the mid-channel (red dashed) for you to see the border where the downside move could start.

The RSI on the weekly time frame already shows the Bearish Divergence as lower peaks on it contrasts with a higher high on the price chart. The breakdown below the 50 level would initiate the reversal to the downside along with the capitulation of the mid-channel support, but it is yet early to ring that bell.