The Energy Information Administration released its Short-Term Energy Outlook for January, and it shows that OECD oil inventories likely bottomed last June 2018 at 2.800 billion barrels. It estimated stocks dipped 1 million barrels in December at 2.914 billion, 54 million barrels higher than a year ago. 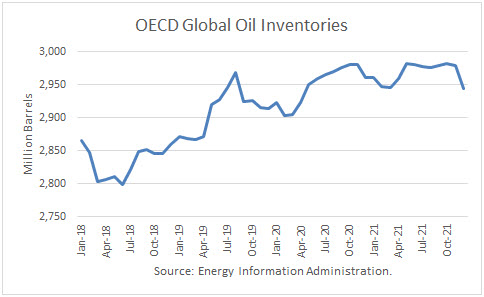 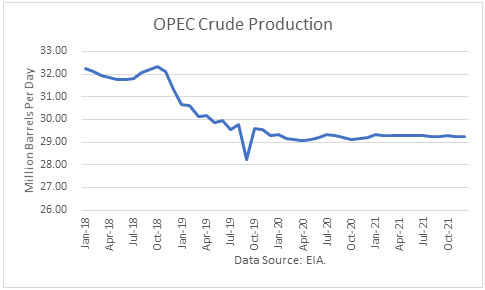 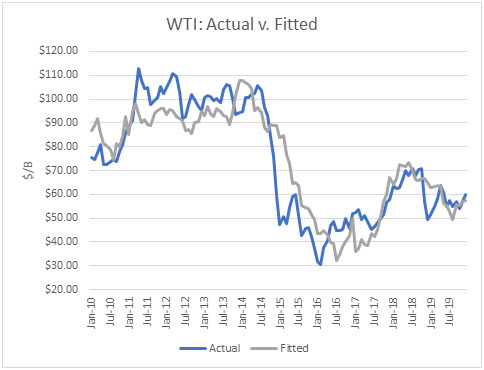 I used the model to assess WTI oil prices for the EIA forecast period through 2020 and 2021 and compared the regression equation forecast to actual NYMEX futures prices as of January 14th. The result is that oil futures prices are presently overvalued for almost all of the forecast horizon except for the next two months. In the latter parts of 2020 and 2021, it shows the valuations dropping down to where NYMEX WTI futures prices are below $50/b. 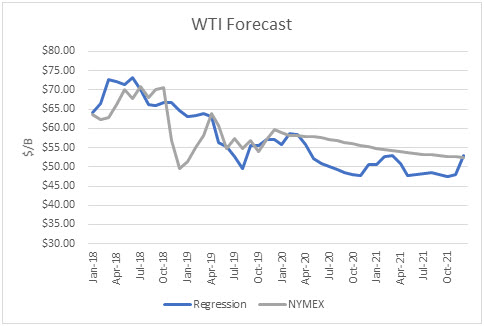 A major uncertainty is whether hostilities will break out between the U.S. and Iran, or whether a new nuclear deal can be reached in 2020. The upcoming U.S. presidential election favors a new deal since one of Trump’s signature positions is that he could improve upon the Obama-era deal. And a new deal would involve lifting the sanctions, which would release 1.7 million barrels per day on the world market, enough to sink gasoline prices in time for the election. Also, Trump would be loath to get the U.S. involved in another Middle East war, since he criticized past presidents for doing so.

The EIA’s forecast shows U.S. production rising to 13.5 million barrels per day by end-2020 and 14.1 million by end-2021. Total Non-OPEC production is projected to increase by 2.6 million barrels per day in 2020. One uncertainty is whether this forecast will be met or if additional gains can be made. Also, it is questionable whether the OPEC+ group can hang together throughout 2020, since some producers seem uncommitted, such as Iraq and Russia.

Another key uncertainty playing out is the trade war with China. A phase one deal is reportedly going to be signed on January 15th, but the U.S. is going to maintain sanctions on $360 billion of Chinese imports through the presidential election; it was reported. And so it remains to be seen whether trade picks up between China and the U.S.

Finally, Venezuela remains a key uncertainty. PDVSA reportedly budgeted for a 650,000 b/d increase in 2020. It had been reported that Rosneft will assist PDVSA to increase production. Output in Venezuela appears to have stabilized the past three months.

Based purely on the model, oil prices are overvalued compared to futures prices beyond March. Key to the near-term will be exactly how much OPEC+ producers reduce output, if at all, and how strong or weak global demand is. The OPEC+ promises had a somewhat limited effect on market sentiment.

One thought on “World Oil Supply And Price Outlook, January 2020”