Last time I updated on the crude oil futures in May 2019, I asked if “You Were Waiting for Crude Oil at $20”. Both the weekly chart and the monthly chart had a bearish outlook as the price of crude topped at $66.60 and then it plummeted below $60. The targets were set between $32 and $22. Check out the poll results below. 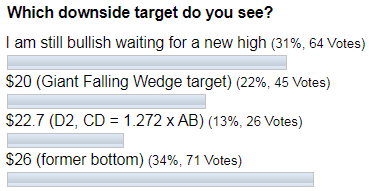 Most of you voted that the price would tag the former bottom of $26. As we know now, the price indeed dropped heavily, but it couldn’t break below $50 and bounced back up from there. So the majority result was the closest call, although with a considerable difference.

The chart structure had changed since then and I am happy to share with you the emerging buy setup for crude oil futures with a considerable reward opportunity. Let’s start with an updated weekly chart below to see the idea.

We can see in the weekly chart above that the crude oil futures spent almost one year within a $50-67 range. The whole zigzag fitted nicely within an almost flat orange channel. It consists of two drops highlighted with two red down arrows. The second drop recently tagged earlier lows at the $50 level and reached the same distance as the first move to the downside. This created an almost perfectly flat range.

This corrective structure retraced more than 61.8% of the preceding move up marked as blue AB segment. All minimum targets were reached within the flat orange correction and I think the new valley at $49.31 could be considered as a bottom.

It was a general idea and now let’s get down to the trade setup on a 4-hour time frame.

To build the trade setup, I switched to a 4-hour time frame to focus on the whole second move down. The orange trendline resistance kept the price beneath it until last Wednesday when it broke above it. The RSI shows that it wasn’t an accident as we can see how the Bullish Divergence had been built before the breakout as lower price valleys (red down arrow) contradicted with higher bottoms (blue up arrow) on the indicator chart.

The price breached the orange trendline as the RSI moved above the 50 level simultaneously. The breakout has been followed by a classic pullback, which already reached 61.8% Fibonacci retracement level.

The buy setup is based on the breakup of the recent top established during the recent breakout of the orange trendline resistance above $52.25. The stop should be set below the recent bottom; currently, it is in the $48.70 area. If the price updates the former minimum of $49.31 before triggering $52.25, then use this new low to limit the risk below it. The target is set at $73.55 on the weekly chart above. The risk/reward ratio stands at 1:6 with the above-mentioned entry/exit, which is huge. And we should consider the extended target of $76.90 as a potential extra gain.