The coronavirus (COVID-19) has wreaked havoc on worldwide supply chains, shipping routes, commerce customer demand, and travel. The broader market sold off in a historic downward move as the coronavirus has spread outside of China. During the last week of February, the Dow Jones and S&P 500 sank by 12% and 11% for the week, respectively. This marked the worst weekly performance since the financial crisis for the markets. The Dow posted its biggest one-day loss ever during the week and tumbled into correction territory, down more than 10% along with the S&P 500 and Nasdaq. This market-wide meltdown is in response to the negative impact that COVID-19 will likely have on the global economy and corporate earnings. A wide array of companies have already issued warnings about their upcoming quarterly earnings. This placed a damper on the outlook for the markets, especially with rising concerns over a potential outbreak occurring in the United States. The OPEC fiasco and plummeting oil prices are exacerbating this market weakness. These events are presenting buying opportunities across the board in high-quality names and the indices on the whole.

The number of new cases in China continued to rise and spiked in South Korea and Italy during the final week of February and the first week of March. During this time, the Dow posted multiple declines of more than 1,000 points. One loss of 1,192 points was the Dow's biggest one-day point loss on record. The Dow was down 14% from a record high during this period. The S&P 500, posted declines of more than 2% multiple times during this two week period as well. The S&P 500 fell 13% below a record high, and this marks the average's fastest decline from a record high into a correction ever, outside of a one-day crash. It's noteworthy to highlight that 96% of the entire S&P 500 is in correction territory, and all 30 Dow stocks are down more than 10% from their respective 52-week highs. Furthermore, the COVID-19 market sell-off has wiped out over $3.5 trillion in market value from its high during the two weeks.

Prior to COVID-19 induced correction, since World War II, the S&P 500 has had 26 market corrections. During these corrections, the S&P 500 has declined on average of 13.7% and has taken approximately three to four months to recover. The S&P 500, after dropping 12% to end February, was the fastest such correction on record. From the end of February and beginning of March was the most volatile action since the 2011 panic over a feared U.S. debt default.

Analysis of prior market declines of 10% or more over five trading days since 1990 shows that equities tend to rebound in a matter of weeks. Excluding the October 2008 plunge of 14.6%, every such sell-off has led to positive returns just two weeks after the fall. For example, in the wake of the 9/11 attacks, the S&P 500 then gained 10.9% over two weeks after selling off. Those gains ballooned to 12.3% one month after the sell-off and 19% after three months (Figure 1). 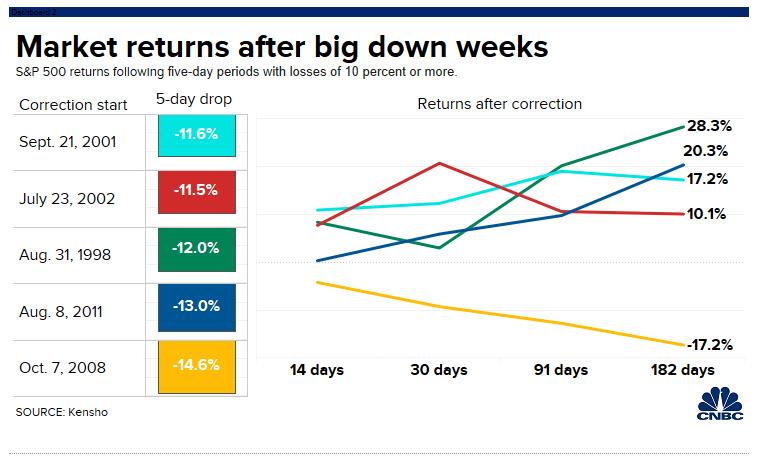 "The silver lining to intense sell-offs is that by the time it feels panicky, it's generally closer to the rebound," Ward McCarthy, chief financial economist at Jefferies, wrote Saturday. "While there are many market prognosticators that will tell you why buying a dip might not work, and why every time is different, it is hard to argue with human nature and history."

McCarthy said that the firm's studies of significant (three standard deviations) and quick moves in the S&P 500 repeatedly showed positive returns in the months thereafter.

"While we found that the bounces tend to be swift and robust, more importantly, performance tends to be overwhelmingly positive over a [three-month] horizon," he wrote.

Barring the sell-offs associated with the great financial crisis, "S&P 500 performance was positive over 90% over the time, in both 1-day and 5-day scenarios," he added. "And to be clear, as bad as Dec '18 felt, Feb was nearly as bad ... and we got there much more quickly."

Looking at data going back to 1930, Bank of America found that if an investor missed the S&P 500′s 10 best days in each decade, total returns would be just 91%, significantly below the 14,962% return for investors who held steady through the downturns.

When you sell during a panic, you may miss the market's best days as rapid sell-offs lead to quick bounces. COVID-19 has sent shock waves through the markets, causing double-digit declines across all major indices. Selling here has proven to put investors at risk for missing out on some of the best days ahead for the market. COVID-19 coupled with the oil market sell-off could be an excellent opportunity to take long positions on high-quality names such as Disney (DIS), Microsoft (MSFT), Google (GOOGL), Facebook (FB) and Mastercard (MA) to name a few as well as the broader indices such as SPY (S&P 500 ETF) and DIA (Dow Jones ETF). Selling far out cash covered puts and put spreads on high-quality stocks that have corrected ~20%-plus may be a great strategy to mitigate further downside and define your risk.

Disclosure: The author holds shares in SPY, DIA, DIS, FB, GOOGL, MA, MSFT, AAL, AMC, KSS, SLB, TRIP, USO and X. However, he may engage in options trading in any of the underlying securities. The author has no business relationship with any companies mentioned in this article. He is not a professional financial advisor or tax professional. This article reflects his own opinions. This article is not intended to be a recommendation to buy or sell any stock or ETF mentioned. Kiedrowski is an individual investor who analyzes investment strategies and disseminates analyses. Kiedrowski encourages all investors to conduct their own research and due diligence prior to investing. Please feel free to comment and provide feedback, the author values all responses. The author is the founder of www.stockoptionsdad.com where options are a bet on where stocks won’t go, not where they will. Where high probability options trading for consistent income and risk mitigation thrives in both bull and bear markets. For more engaging, short duration options based content, visit stockoptionsdad’s YouTube channel.