Timing when oil storage will be full is one of the key issues of interest in the oil market. It depends on how long stays depressed, or how quickly it can rebound, and how much oil producers are cutting output in the U.S. and worldwide. The answers are unknown, but I will try to outline what is known and likely.

Oil data in the U.S. is the most timely and accurate, so that’s a good place to start. Crude oil inventories in Cushing, Ok., the delivery hub for the NYMEX WTI crude futures contract, reached 59.7 million barrels in the week ending April 17. About 2.1 million is used for line fill, and so 57.7 million is the net stocks held in tank farms. That represents 76 % of net working storage of 76.1 million barrels.

Given the excess storage, it would not explain why trader panic drove oil prices negative just prior to the expiration of the May contract. The reason was that the remaining storage was leased. “The terminals have already contracted their storage 100%,” said Ernie Barsamian, chief executive officer of The Tank Tiger, a terminal storage clearinghouse, was quoted.

And so traders who were still long but could not take delivery had to sell at any price. And buyers got the deal of the century, being paid as much as $40/bbl to take the product.

Based on the recent trend in weekly stock builds, I estimate that Cushing storage will be completely full by the week ending May 8. This implies that the longs must close before expiration May 19 since there will be no place in Cushing to take deliveries. 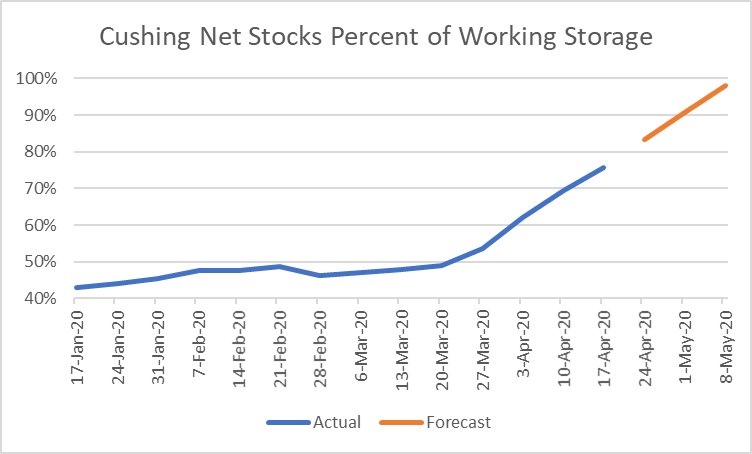 Across the U.S., the storage is not quite as tight—on paper. 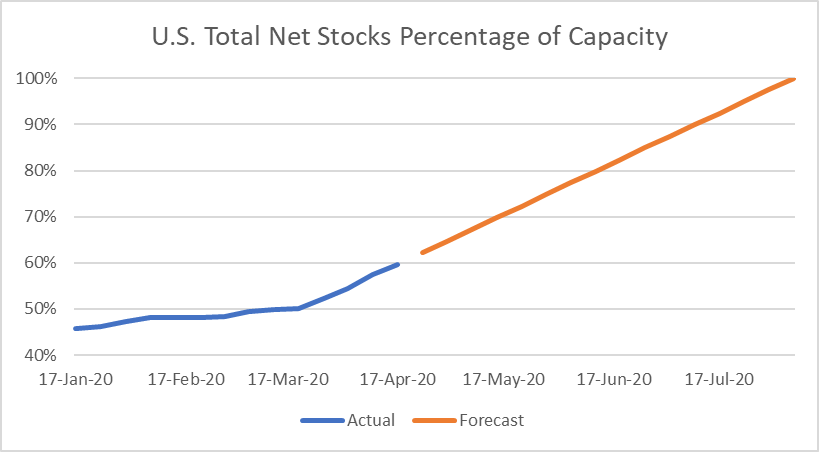 In addition, the Strategic Reserve has about another 75 million barrels of unused storage capacity. The Administration has gone back and forth on whether it will buy oil to store or lease out the space for storage.

S&P Global Platts reported that about 30% to 40% “of storage in the U.S. is empty, but it’s all booked and in the hands of traders and operators. We can probably say the same for all storage around the world. There is storage available but not to rent.”

There is an armada of about 20 tankers off the coast of Los Angeles, and they are among at least 35 idle along the U.S. Pacific Coast. A fleet of 20 oil tankers from Saudi Arabia is headed toward the U.S. Gulf Coast, carrying 40 million barrels of crude. Sea-based tanker storage at about 160 million barrels. 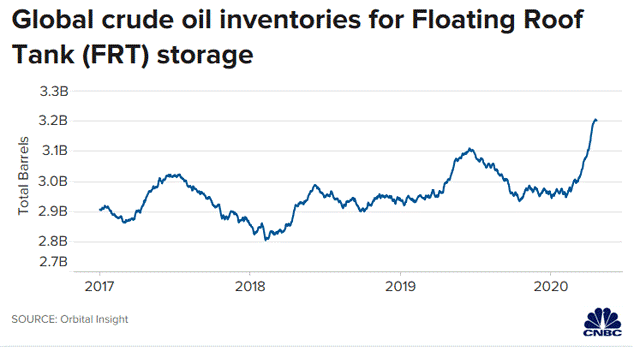 How fast global storage fills largely depends on when oil demand rebounds since demand losses have overwhelmed production cutbacks. In the U.S., the largest oil-consuming country in the world, the White House Coronavirus Task Force coordinator, recently said that while the coronavirus trends give her “great hope” for slow reopening over the next few months.

Goldman Sachs expects “oil to test global capacity in the next 3-4 weeks, which will likely create substantial volatility with more spikes to the downside until supply finally equals demand, as with nowhere to store the oil, supply has no other option but to be shut-in down in-line with the expected demand losses.”

Oil in storage is likely to hit capacity in Cushing in a couple of weeks. And excess storage throughout the U.S., and the world is filling up fast. But the key point is that what excess capacity exists has been leased.

Hopes for a favorable resolution mainly rest on a demand recovery from the pandemic. But hopes for such a recovery should be tempered by the reality that human behavior, not governments, will determine the rate of rebound to oil-consuming activities.

On the supply-side, it will come down to shut-ins if storage is filled this summer. And that would be the result of oil prices so low that there is no alternative.

One thought on “Oil To Test Storage Capacity”