Excerpted from this week's edition of Notes From the Rabbit Hole, the Opening Notes segment of NFTRH 602:

As we noted in March while it was happening the sentiment environment became terror-stricken. Not fearful. Not over-bearish. Not even a contrarian extreme. Market sentiment was marked by full-frontal terror as indicator after indicator (ref. Sentimentrader's historic readings week after week) got slammed to epic over-bearish proportions.

Into the breach sprang the Treasury (i.e. taxpayer) backed Federal Reserve to the rescue. As the employment numbers come in at the tragic readings that we all saw coming the bears are out there beating a drum (ah, Twitter) about why it is not right, why the Fed cannot print a bull market, why the stock market is going to make new lows and why you should avoid stocks! They have been saying this since the terror-stricken days of March and they are still saying it now.

And do you know what? The rising risk profile that we have been noting for weeks will likely paint them as being right before too long. Imagine all those 'man who predicted a new stock market crash now predicts... (blah blah blah)' headlines that we will be subjected to as the paint-by-numbers media look to feed easy answers to the public later in the year and into 2021. The bears will probably be right but here’s the thing, they have not been right for nearly 2 months now.

When I write that the stock market is two things 1) bullish and 2) at high risk I trust you not to overreact to either of those statements. I ask you to consider and weigh them and to proceed using that information in a way that best suits your investment style. Revisiting the charts introduced a few weeks ago we see a target upcoming for SPX. 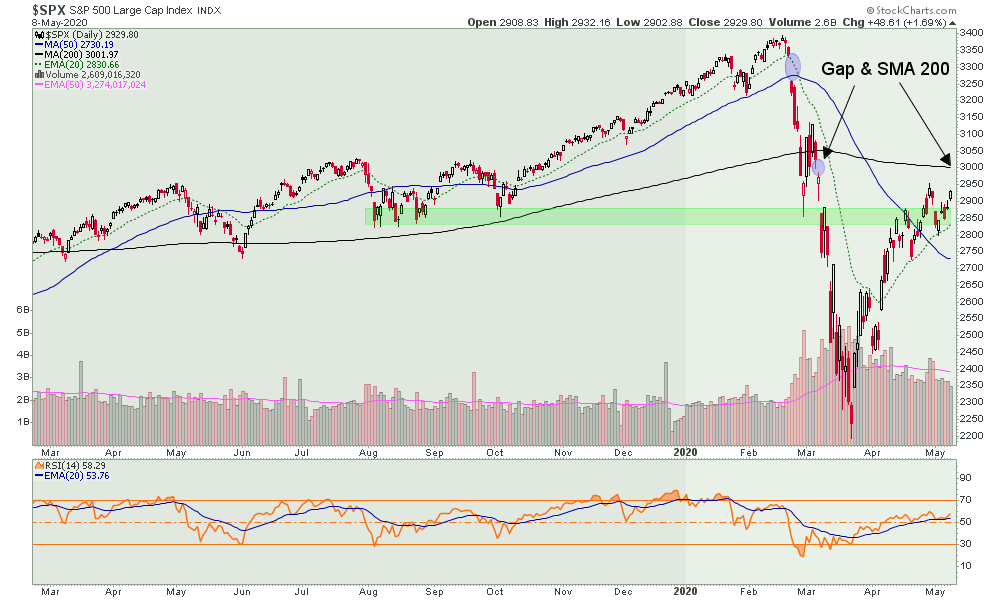 As for NDX, take a look at this. The media headlines are already talking about Nasdaq in positive territory for the year and a gap fill, which we’ve had on radar all along for this leading index, appears likely. 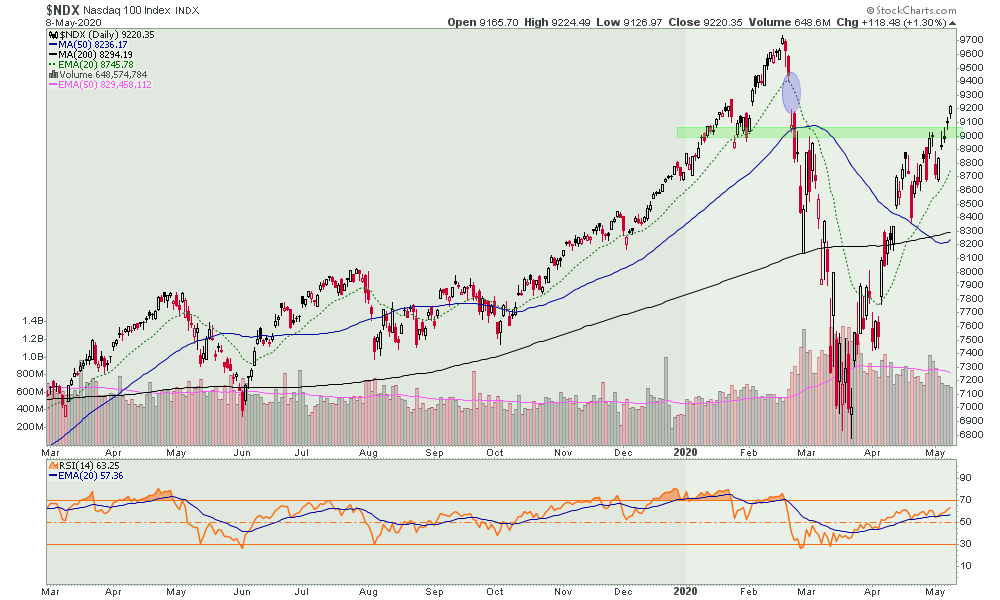 It does not have to make sense. It just has to be what it is. What perma-bears don't understand during a relief rally is the same thing perma-bulls don't understand when things fall apart. The stock market is going to do what it is going to do anyway, informed by not only economic fundamentals (which COVID-19 ultimately is) but also by sentiment extremes and unquantifiable layers of monetary and fiscal policy machine-gunned at the stock market (they can say it's aimed to the economy but you and I know better).

As many businesses ground to a halt and unemployment jumped to 14.7% (and that's only what is counted) the stock market is supposed to go down. Or so many people think.

The stock market, AKA the product of millions of humans' and machines' responses to sentiment and technical markers, is only supposed to do something. Not go up. Not go down. Something. Currently, it is approaching logical targets with the S&P 500's SMA 200 overhead and the leading Nasdaq 100’s gap up there close to all-time highs (can you imagine those headlines?).

The only logical response is to remain unbiased, open-minded, aligned with the probabilities, and ready for what the market delivers. It is no accident that NFTRH's view has been Tech-intensive and in particular, 'remote work/communication/collaboration' Tech-intensive. We've been highlighting those areas for months. But risk continues to rise. We should manage accordingly.

Subscribe to NFTRH Premium (monthly at USD $35.00 or a 14% discounted yearly at USD $365.00) for an in-depth weekly market report, interim market updates and NFTRH+ chart and trade setup ideas, all archived/posted at the site and delivered to your inbox.

You can also keep up to date with plenty of actionable public content at NFTRH.com by using the email form on the right sidebar and get even more by joining our free eLetter. Or follow via Twitter @BiiwiiNFTRH, StockTwits or RSS. Also, check out the quality market writers at nftrh.com.