According to the Energy Information Administration, U.S. crude inventories (excluding SPR) built by 14.9 million barrels last week to 1.415 billion, whereas SPR stock built by 2.1 million. They stand 129 mmb above the rising, rolling 5-year average and about 129 mmb higher than a year ago. Comparing total inventories to the pre-glut average (end-2014), stocks are 356 mmb above that average. 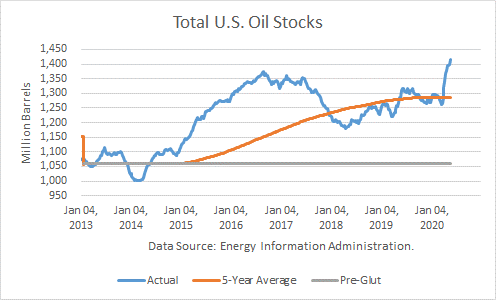 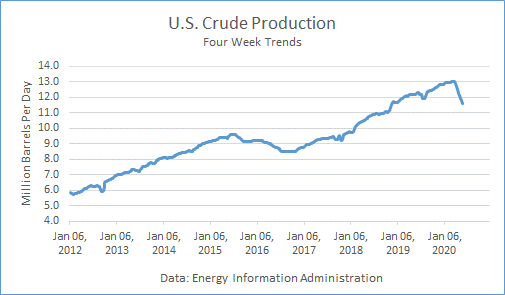 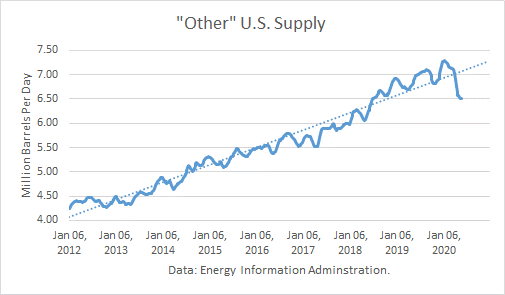 Crude oil production plus other supplies averaged 18.099 mmbd over the past 4 weeks, well below the all-time-high record. 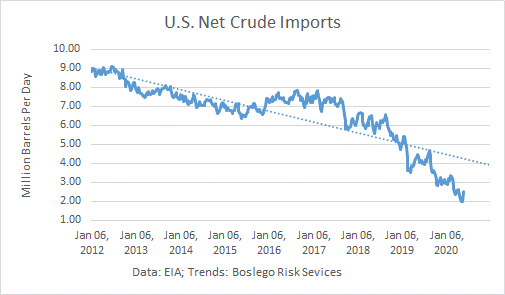 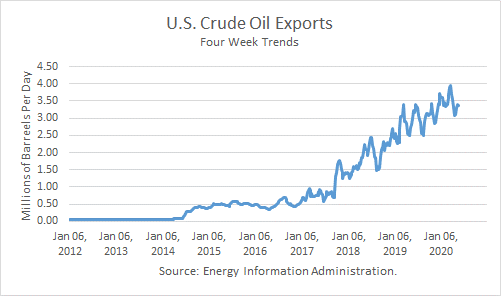 U.S. crude imports from Saudi Arabia rose by 947,000 last week to average 1.590 mmb/d. This reflected the surge in Saudi exports to the U.S., which began in late March after the price began between the Saudis and Russians. They had reportedly sent an armada of tankers carrying up to 50 million barrels to flood the U.S. market. Over the past 4 weeks, Saudi imports have averaged 840,000 b/d, up 91 % from a year ago. 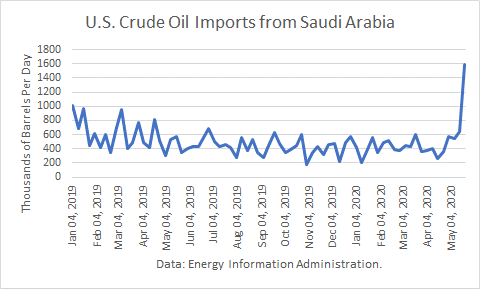 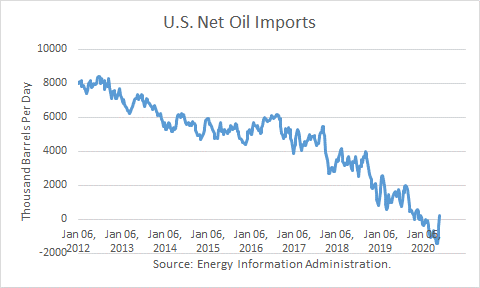 Net oil imports averaged 236,000 b/d over the past 4 weeks. That compares to net oil imports of 1.345 mmbd over the same weeks last year. This is the first 4-week period this year in which imports exceeded exports. 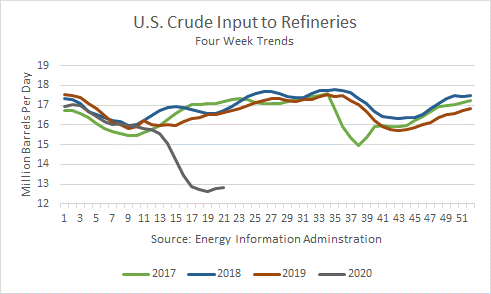 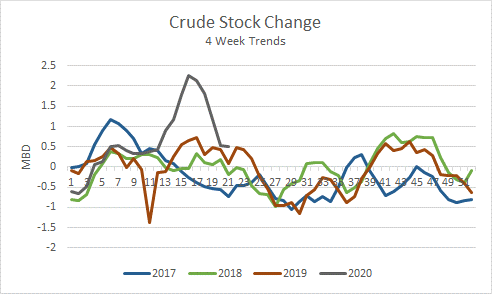 Commercial crude stocks 534.4 mmb are now 57.9 million barrels higher than a year ago. 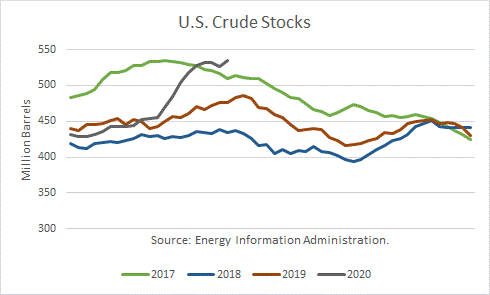 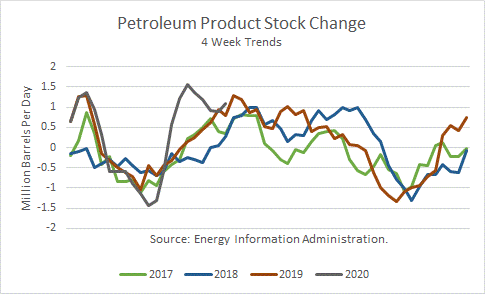 Total U.S. petroleum product stocks at 880 mmb are 71 million barrels higher than a year ago. 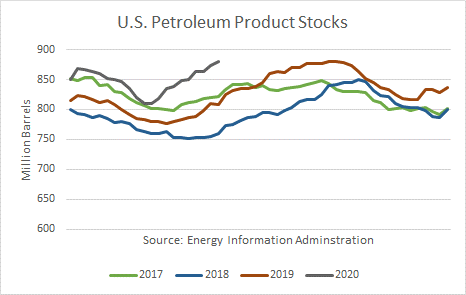 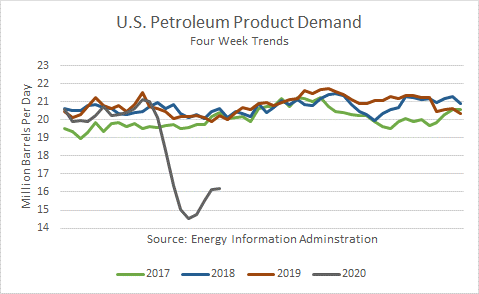 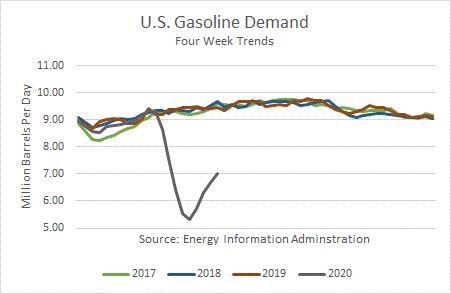 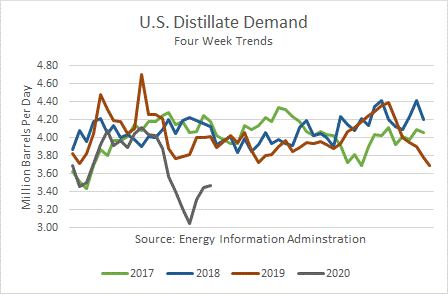 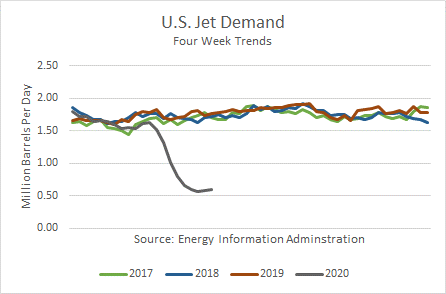 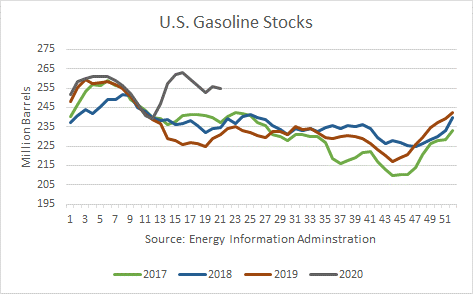 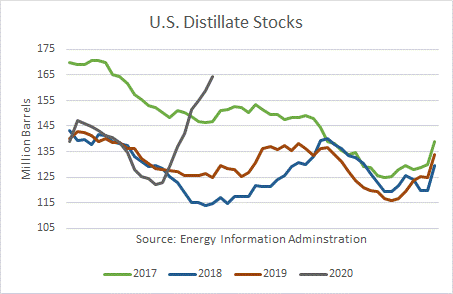 The bottoms in petroleum product demand and crude oil demand at refineries are clearly seen in the graphs. However, both crude and product stocks continue to rise as supplies still exceed demand.

Furthermore, the Saudi import surge has just been recorded in the customs data. We can expect to see the surge continue for another 3 weeks, ballooning crude stocks.

Oil prices have rebounded off the lows, but the oil market is not out of the woods yet. And it remains to be seen how robust the oil demand rebound will be with high unemployment and behavioral shifts due to the pandemic affecting oil demand.