Disney’s impressive streaming numbers have thus far negated the impact that COVID-19 has had on its other business segments, mainly its parks. The Walt Disney Company (DIS) has had to shutter all of its worldwide Parks and Resorts, and ESPN has been hit with the cancellation of virtually all sports worldwide. Advertising revenue coming through its media properties has been hit as companies scale back ad spending. All of its movie studio productions have been halted, and movie releases are postponed. Despite the COVID-19 headwinds, streaming initiatives have been major growth catalysts for the company. Disney+’ growth in its subscriber base has shifted the conversation from COVID-19 to a durable and sustainable recurring revenue streaming model. This temporary bright spot, in conjunction with the optimism of its Park and Resorts coming back online, has been a perfect combination as of late. Disney+ has racked up 57.75 million paid subscribers, Hulu has 35.5 million paid subscribers, and ESPN+ has 8.5 million paid subscribers. Disney now has over 100 million paid streaming subscribers across its platforms. Disney+ has been wildly successful via unleashing all of its content (Marvel, Star Wars, Disney, and Pixar) in what has become a formidable competitor in the ever-expanding streaming wars domestically and internationally. Hence the tug-of-war on Wall Street between COVID-19 impacts versus the success of its streaming initiatives. Thus far, its streaming success has changed the narrative as its stock is approaching highs not seen since February. Disney is a compelling hold as its legacy business segments get back on track in conjunction with these successful streaming initiatives.

Disney’s business segments will regain their health as COVID-19 subsides worldwide and/or there’s a vaccine approved. Parks will reopen as seen with Shanghai, Hong Kong, and Disney World. Inevitably, movie productions will resume, movie theaters and resorts will reopen, and sports will play-on. The resumption of all of these activities will feed into Disney’s legacy businesses in conjunction with its streaming successes. Disney continues to dominate the box office year after year with a long pipeline of blockbusters in the queue. Its Parks and Resorts continue to be a growth avenue with tremendous pricing power outside of COVID-19. Disney is going all-in on the streaming front and acquired full ownership of Hulu, and the company has launched its Disney branded streaming service with tremendous success with kudos from Reed Hastings. I feel that the company offers a compelling long-term investment opportunity given its growth catalysts that will continue to bear fruit over the coming years despite the current headwinds.

The Walt Disney Company (DIS) announced its Q2 earnings and took a $3.5 billion hit to its operating income from its parks being closed. Revenue from its Parks, Experiences, and Products segment (which includes cruises, resorts, and merchandise) declined by a whopping 85% compared to a year earlier to below $1 billion. EPS came in at $0.08, and revenue came in at $11.78 billion, with EPS and revenue declining 94% and 42% year-over-year, respectively. Disney has been unable to release a new film in theaters since mid-March, which has taken a toll on its studio business. During the quarter, studio entertainment revenues declined 55% to $1.7 billion.

“Despite the ongoing challenges of the pandemic, we’ve continued to build on the incredible success of Disney+ as we grow our global direct-to-consumer businesses.”

“The global reach of our full portfolio of direct-to-consumer services now exceeds an astounding 100 million paid subscriptions -- a significant milestone and a reaffirmation of our DTC strategy, which we view as key to the future growth of our company.” (Figure 1). - Bob Chapek, Chief Executive Officer, The Walt Disney Company

COVID-19 negatively impacted Disney’s business segments in a number of ways, specifically at Parks, Experiences, and Products. Closures of theme parks, retail stores, suspension of cruise ship sailings, and guided tours while experiencing supply chain disruptions in Q3. Disney has delayed theatrical releases and suspended stage play performances at its Studio Entertainment. The company has seen advertising sales slump at Media Networks and Direct-to-Consumer & International. Disney has also experienced disruptions in the production and availability of content, including the cancellation or deferral of certain sports events and suspension of production of most film and television content. Many of these businesses have been closed consistent with government mandates. Impacts at other segments include lower advertising revenue at Media Networks and Direct-to-Consumer & International driven by a decrease in viewership, reflecting COVID-19’s impact on live sports events and a loss of revenue at Studio Entertainment due to theater and stage play closures (Figure 2). 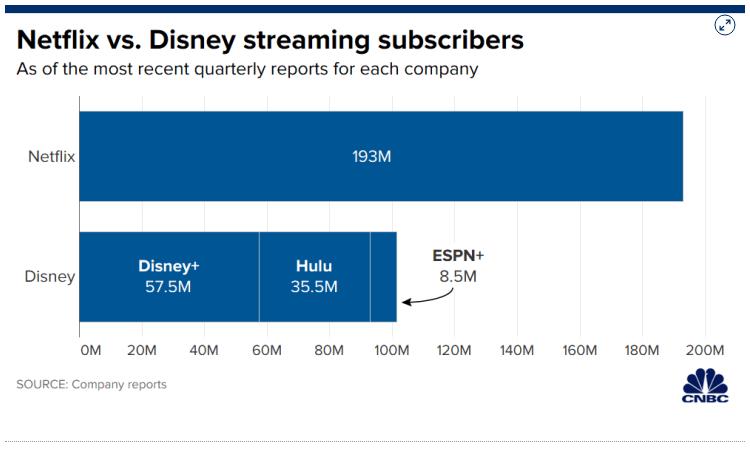 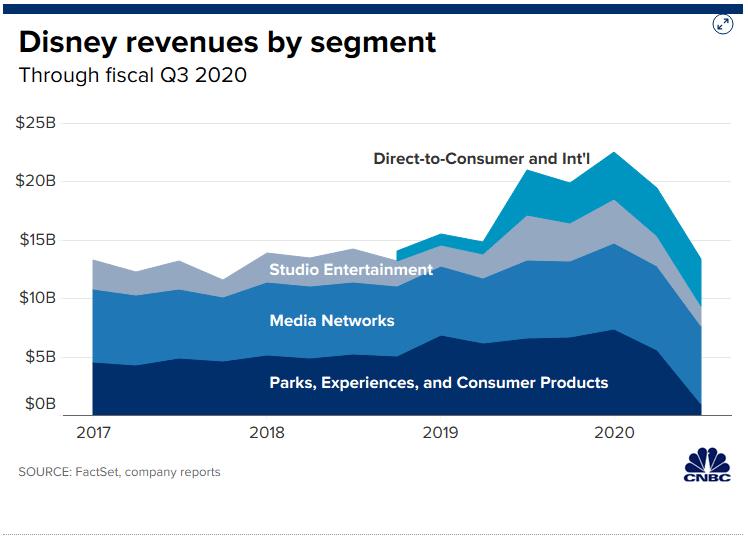 The 57.5 million subscriber base is far ahead of estimates on Wall Street and by internal projections. Disney had provided guidance of 60 million-90 million global subscribers by the end of fiscal 2024. Giving rise to potentially hitting these targets four years ahead of schedule. Later this year, Disney plans to continue expanding Disney Plus throughout Western Europe, as well as across Latin America and Japan, per Kevin Mayer, chairman of Walt Disney Direct-to-Consumer & International. Disney+’ content lineup includes more than 500 films and 350 television series from its collective brands of Disney, Pixar, Marvel, and Star Wars. There are also dozens of originals such as the Star Wars live-action series “The Mandalorian.”

The Walt Disney Company (DIS) has successfully shifted the narrative from it's COVID-19 challenges to a streaming juggernaut with over 100 million paid subscribers across its various platforms. In the backdrop, is its legacy business segments ready to regain its footing as COVID-19 subsides. All the initiatives that Disney has taken over the previous few years to remediate its business and restore growth appear to be coming to fruition via its Fox acquisition and its streaming initiatives. Disney+ blew out expectations with 57.5 million paid subscribers thus far in 2020 and on pace to deliver projections four years ahead of schedule. Shanghai Disney, Hong Kong Disney, and Disney World are coming back online slowly with the rest of its parks following suit. Disney continues to invest heavily in its streaming services (Hulu, ESPN Plus, and its Disney+ streaming service) to propel its growth and dominance in the streaming space. The company is evolving to meet the new age of media consumption demands via streaming and on-demand content. Disney’s streaming initiatives via Hulu, ESPN Plus, and Disney+ will continue to be major growth catalysts moving forward despite COVID-19 disrupting its legacy segments. Disney is a compelling hold as its legacy business segments get back on track in conjunction with these successful streaming initiatives.