When engaging in options trading, it is only a matter of when, not if, a trade will move against you and challenge your strike. Despite being disciplined and following the 10 rules in options trading, trades will be challenged, and some losses are inevitable. However, some of these potential losing trades can be managed effectively to circumvent losses altogether via rolling. Given the right set of circumstances, trades can be rolled by closing out the pending trade for a debit and subsequently opening a new trade with a later date and further out-of-the-money strikes for an overall credit.

Options trading enables traders to define risk, leverage a minimal amount of capital, and maximize return on investment. Options trading can create smooth and consistent portfolio appreciation without predicting how the market will move. Options enable one to generate consistent and durable monthly income in a high probability manner in both bear and bull market scenarios.

An agile options-based portfolio is essential to navigate pockets of volatility and mitigate market downdrafts. The September correction, October nosedive, and election volatility into November are prime examples of why risk management is paramount. Over the past ~9 months (May-January), 190 trades were placed and closed. An options win rate of 97% was achieved with an average ROI per winning trade of 7.7% and an overall option premium capture of 82% (Figures 1 – 4). The performance of an options-based portfolio demonstrates the durability and resiliency of options trading to drive portfolio results with substantially less risk. Rolling option trades can be part of the overall options strategy to circumvent losses and mitigate risk. 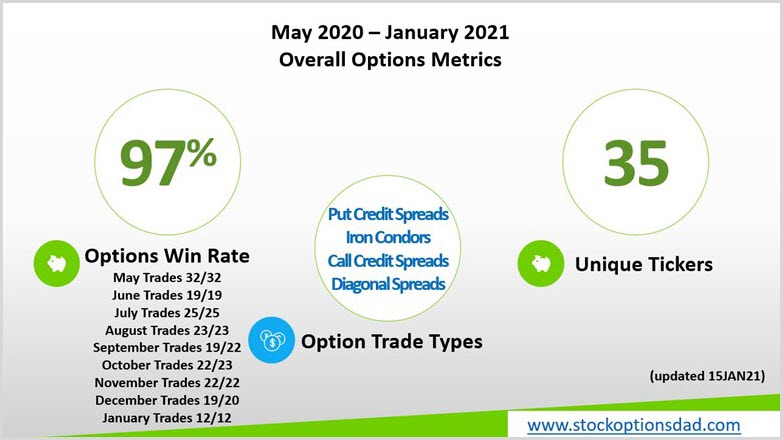 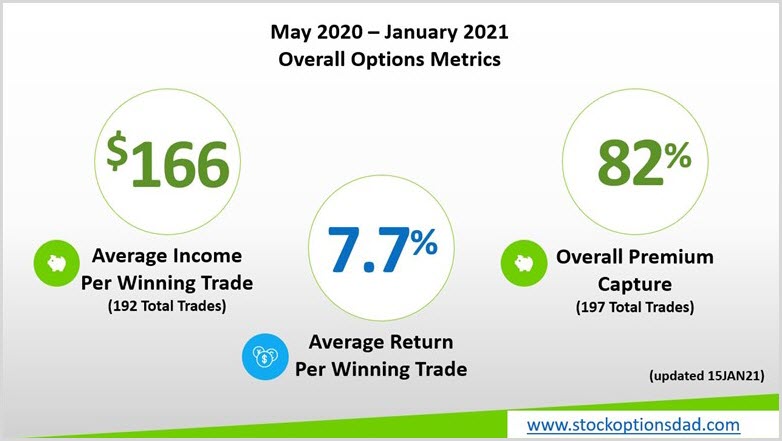 Rolling a trade is a mitigation strategy that is deployed when an option’s strike leg is breached. Once the strike is breached, potential losses come into play. Rolling a trade involves closing out the pending trade that is challenged for a debit and then opening a new trade for a credit. The net credit received will negate the debit required to close out the initial trade while providing net premium income. The new trade will be in the same underlying security but later dated with further out-of-the-money strikes. This rolling strategy provides more time and more of a buffer in the stock price movement while circumventing the loss.

Each initial option trade should be structured in such a way that enables the ability to roll the trade in the event the trade is challenged during the option lifecycle. Initial trade structure is imperative, so rolling can easily be a viable option if needed.

Message From Our Sponsor

My #1 Rule: Don't Buy Options (especially in this market)!

Most options traders place high-risk trades, hoping for a big payout. But they lose... a LOT! Especially in today's topsy-turvy market. That's why Jim Fink flips options trading on its head, making money more than 85% of the time. Now, he's offering to show his personal strategy guide to readers, which could help you unlock as much as $67,548 in extra income.

Initial strike width selection needs to be narrow. If the strike width is too wide and the trade breaks down well below the protection leg, then the debit required to close the trade will be too great to overcome with a new credit without being over-leveraged in that trade. Rolling a trade is a last resort lever to pull, so allow the trade to mature as close as possible to its expiration date. This will allow mean reversion to possibly take place and retrace back to out-of-the-money territory so rolling can possibly be avoided altogether.

When a trade breaches the strike price, one must be careful not to overleverage the amount of capital dedicated to the rolling trade. The underlying security may continue to move against your directional trade; thus, allocation discipline is key. You do not want to dedicate too much capital, nor do you want to continue to allocate capital to a losing trade. Often, absorbing the loss may be the most prudent action if the initial rolling of the trade failed to circumvent losses. Continuing to roll the trade to overcome the debits required to close out the preceding trade(s) will require more leverage in one’s portfolio. This can be a dangerous cycle since strike widths will likely need to be widened and/or the number of contracts will need to be increased. These two elements will require more capital and potential for larger losses than initially set forth.

Rolling decisions are made based on data and circumstances available at the time of that decision. In hindsight, rolling a trade may not have been necessary when expiration comes to fruition. Often, more patience is required to allow the trade to unfold further into its option lifecycle. Hindsight is always 20/20; however, based on the stock movement, strike price being breached, and statistical edge no longer in one’s favor, rolling is the best way to reset the statistical edge in your favor. Mastercard (MA) and FedEx (FDX) were two trades that I rolled; however, in hindsight, both trades would have expired worthless anyway, so rolling was not needed.

A put spread on MA was sold with a $295/$290 and then rolled out a month to a further out-of-the-money $275/$265 strike pair. At the original expiration date and strike of $295, the trade moved back to out-of-the-money and would have expired worthless, so the realized profits were pushed out a month due to rolling the trade. The initial trade was closed for a debit of $632, and the new trade was opened for a credit of $806, thus still generating $173 in net premium profit.

A put spread on FDX was sold with a $250/$240 and then rolled out a month to further-out-of-the money $230/$220 strike pair. At the original expiration date and strike of $250, the trade moved back to out-of-the-money and would have expired worthless, so the potential realized profits were pushed out a month due to rolling the trade. The initial trade was closed for a debit of $703, and the new trade was opened for a credit of $882, thus still generating $180 in net premium profit.

In these cases, rolling was not necessary; however, this allowed for the statistical edge to be reestablished and provided breathing room in trades that were challenged during the option lifecycle unfolding. Profits were still realized, albeit a month postponed.

Rolling can be an effective mitigation strategy when faced with a challenged strike price. An option’s statistical edge must be reset by rolling a trade to reestablish this edge to your advantage. Rolling out to a later date and further out-of-the-money strikes allows more time for the trade to work through the unexpected price excursion. Often, more patience is required to allow the trade to unfold further into its option lifecycle prior to deciding on rolling a trade.

An options-based approach provides a margin of safety while circumventing the impacts of drastic market moves and contains portfolio volatility. Sticking to the core fundamentals of options trading, one can leverage small amounts of capital, define risk, and maximize investment return. Following the 10 rules in options trading demonstrates the durability and resiliency of an options-based portfolio to outperform during pockets of market turbulence. To this end, cash-on-hand, long exposure to broad-based ETFs and options is an ideal mix to achieve the portfolio agility required to mitigate uncertainty and volatility expansion.