Some investors believe that the price of Bitcoin could hit $100k. In this post, I'll share some measurements I made in the bitcoin chart to see if there is some evidence for such strong optimism.

There is a logarithmic (log) monthly chart of bitcoin below. I chose the log scale to show you the coin's relative performance. It will reveal the different angle of view on the price dynamics for you. 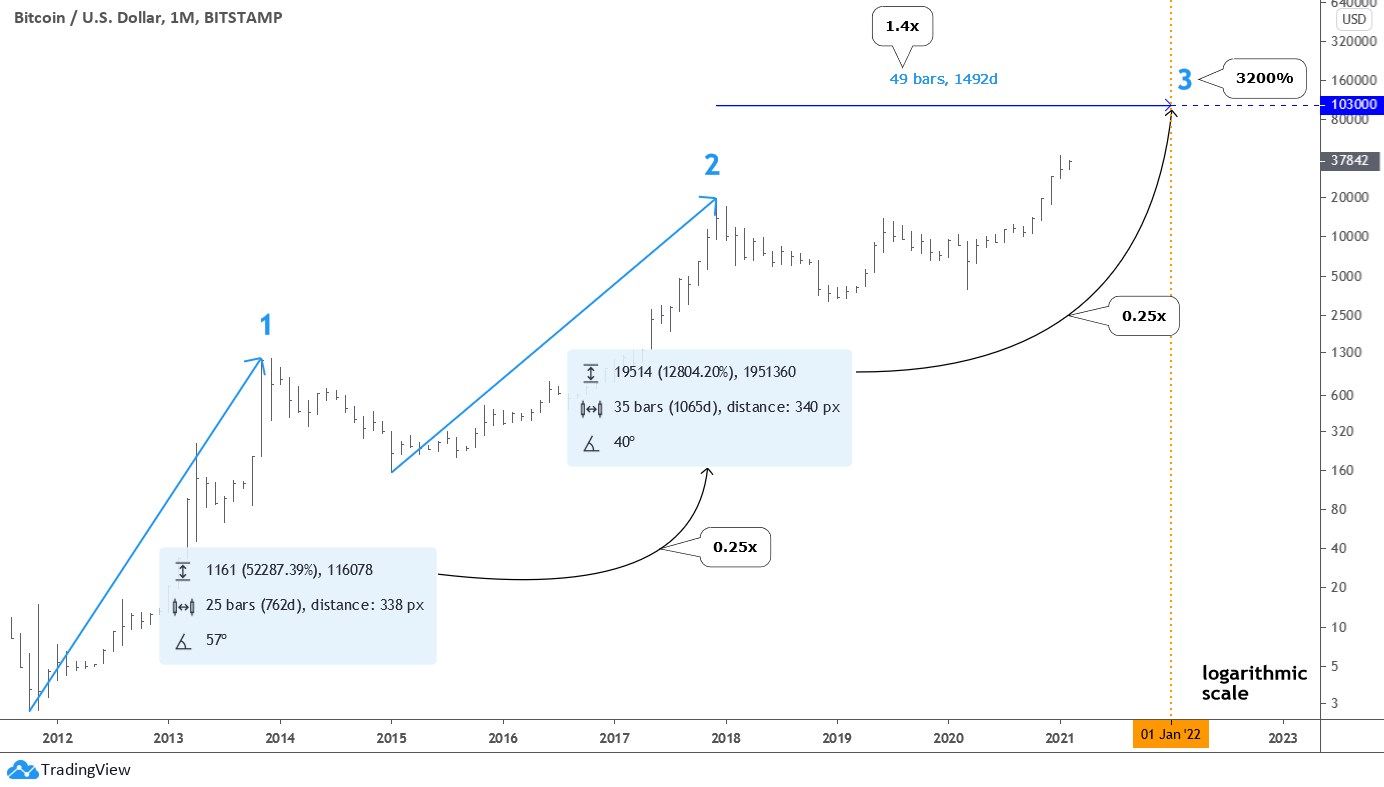 We can highlight two completed large moves to the upside marked with numbers accordingly. On the right side of each move, there are light blue statistics windows showing how much, how long, and how sharp the move was.

In 2014, Colorado became the first U.S. state to legalize recreational cannabis. Since then, sales have boomed, hitting a new all-time high of $2 billion in 2020.

See how to invest in this powerful trend with a secret cannabis stock that is one of the most undervalued in the industry.

Now we can find the target for the current move up, which started from $3,122. Believe it or not, but the projected destination point is located in the jaw-dropping $103,000 area. But in relative terms, it looks like fading growth compared to the blasting first move. Each growth angle confirms that; the first move has a sharp angle of 57° while the second one was less sharp with an angle of 40°. The current move is even flatter with an angle of only 30°.

That's not all; there is enough data to calculate the time range. The first move was faster and sharper as it took only 25 monthly bars to emerge compared to 35 monthly bars in the second move. It gives us an extension ratio of 1.4x (35/25). If we multiply that ratio to the second rise of 35 monthly bars, we will get 49 monthly bars for the current move up. I added it in the chart to measure the time target; it falls at the start of the next year (orange vertical line). The 78% of the time range already elapsed.

There are other interesting findings in this chart. The correction after the first move up almost reached the 88.6% Fibonacci retracement level, and the pullback followed the second move up. Coincidence? Imagine where bitcoin's price could crash after hitting $103,000 if this pattern continues... $15,000.

I am eager to see your thoughts; please share your comments below.