This week we have a stock market forecast for the week of 4/18/21 from our friend Bo Yoder of the Market Forecasting Academy. Be sure to leave a comment and let us know what you think! 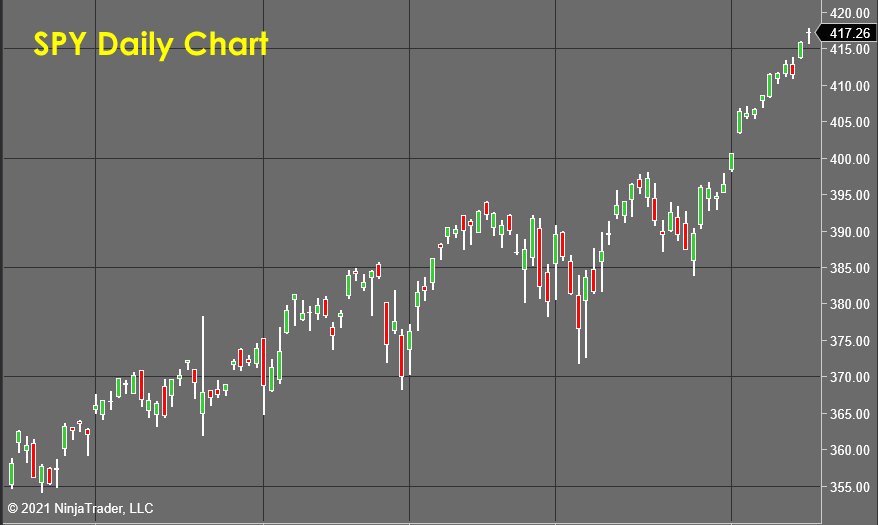 If you were not clear about how directly the impact of the Fed’s expansion of the money supply affects the S&P 500 (analyzed here using SPY), this daily chart will fix that.

The market is levitating into what appears to be a “blow-off top,” as it becomes absurdly overbought.

But don’t fall into the trap… Expecting this stimulated market to act “normally” is like expecting somebody who has consumed multiple energy drinks with dinner to be sleepy at 9 pm.

Both will “crash” only after the drugs of stimulation leave their system.

Because this insatiable demand is being caused by inflation fears and the desperate need for institutions to place the gobs of money that have been injected into the system, it doesn’t behave according to historical tendencies. I’ve always laughed at folks who say, “this time, it is different,” but I have to swallow my discomfort and join their ranks at this time. We have never seen this kind of central bank management of our economy, so the forces ARE truly different this time.

As long as dramatic increases to the money supply keep being created, we will see these inorganic “melt-ups.”

That being said, my instruments show that the buying is real and started to erode slightly as we went into the end of last week. I would expect that this bearish pressure is the result of simple profit-taking and don’t have a high odds forecast for the S&P moving forward. I am, however, NOT afraid to miss calling this top, as the levels of bullish momentum that have shown themselves indicate that the top will need quite some time to process before any sustainable correction can form.

If Monday is a weak one, the odds are high that a retest of the highs will come at some point, and THEN I’ll have a more reliable indication of whether or not a breakout or a reversal is likely to occur. I continue to sit aside and just focus on day-trades in the S&P while I manage open positions. 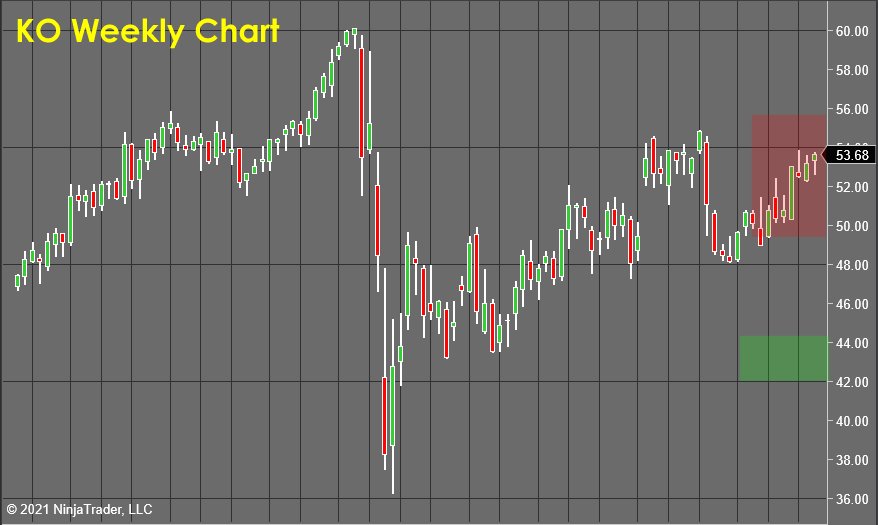 I am quite frankly astonished that Coca-Cola (KO) didn’t stop out for a loss, with all the melt-up energy in the market indexes.

This stock is really weak to rally so poorly in the face of a huge move up in the markets. When the markets roll over into correction, I would expect to see the bears come crashing into this stock. If this scenario fails to appear, then we can start to think about taking losses, but for now, I see this as having dodged a bullet and am sticking to the plan! 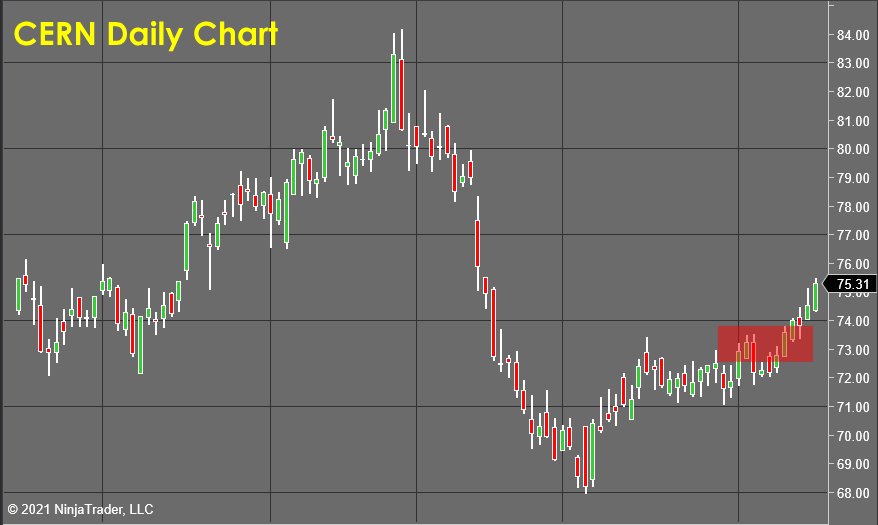 Cerner Corporation (CERN) was a lower probability/higher reward entry possibility last week. Unlike KO, which resisted the rally, CERN never stood a chance, and the stops got “run over” in the melt-up.

I’ll take the loss and be happy losses were correctly cut short as I watch this stock continue to rally. 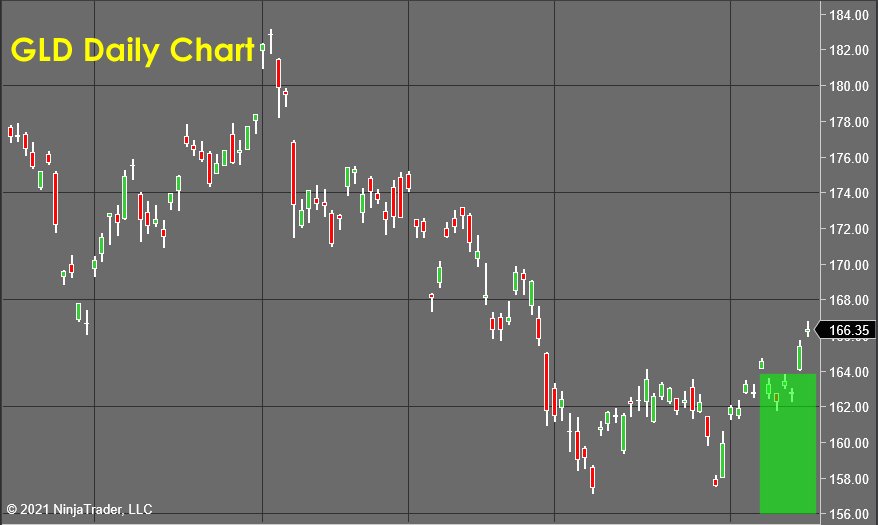 Any negative emotions generated by CERN are quickly wiped out when you look at the daily chart of Gold (analyzed here using GLD). Inflation fears and the news that the Chinese are aggressively accumulating bullion launched prices higher and blatantly confirmed the recent bullish reversal and a sustainable bottom (as a forecast, of course)!

So, now that it’s “game on” for gold, we will see how emotional and overheated the buying gets. I will continue to take measurements of supply and demand as this new uptrend unfolds. I hope and expect that this will be a long-term position, taken at a very elegant point. 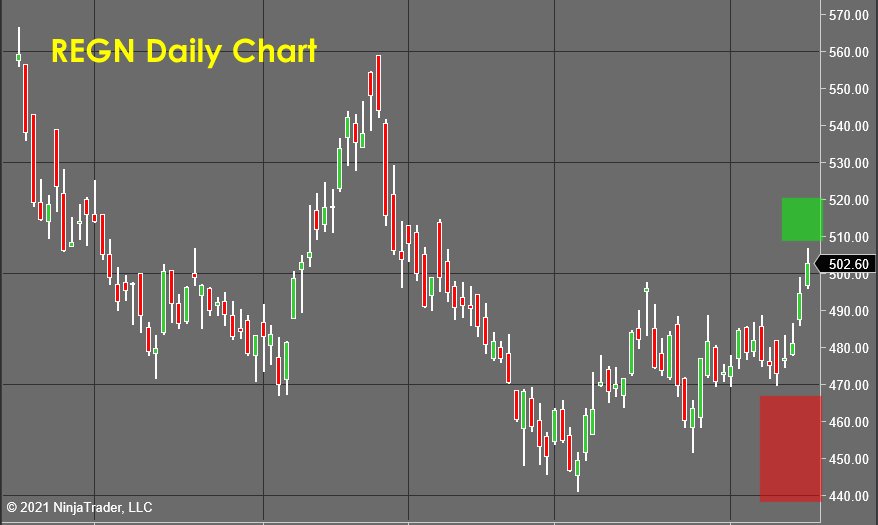 For those of you who are new to active trading, I want you to really look carefully at this week's column. I don’t write these to be sexy and “action-filled”; I write them so that you can see the truth that:

1. Clear and confident market forecasting is REAL and sustainable
2. How an active position trading program looks and feels

This week we had no clear forecast in SPY, a stock that passed a really tough test of bearish resolve in KO, a loss in CERN, and super moves on growing momentum in GLD and REGN.

This is the math game that trading is. You are taking advantage of opportunity, knowing the odds are stacked in your favor, but not becoming emotionally attached to the outcome of any one position. You know that over time you will take winner and losers and that your number of winners and the size of those gains will overcome the setbacks of any losses you take.

This is a simple and straightforward process, but one that the human mind can use to make up lies and provoke strong emotions when you need to remain patient and objective. That is why it is so critical to have a set of analysis tools that you believe in to keep you focused on the data, not your emotions.

Regeneron Pharmaceuticals (REGN) exploded higher about 5% this week and, like Gold, really clearly and blatantly confirmed its recent bottom as a sustainable reversal. This week’s action should attract new buying to the market and make it easy to take some partial profits as price tests higher into the green zone.

My indications show that there are likely higher prices to come, so I will be most interested to see where this stock is by the end of next week so that I can update my forecast from that data.