I’ll get to the reasons why it should be a part of just about every investor’s portfolio in just a moment.

I’ll also get into why, if you do take the plunge into crypto, do so gingerly.

But before we get started, take a look at the first three installments in this multi-part series about blockchain and cryptocurrency. We talked about why they’re so important, what they’re all about, and what they really mean to you.

Feel free to take a look at these when you get a sec. But they’re not needed to get a deep understanding into what we’ll talk about today.

So, let’s get to it. Here are just a few reasons to own cryptocurrency...

A couple of years ago when I first started writing about cryptocurrency and blockchain, all you heard was that it was a fad and wouldn’t amount to much.

In fact, there was a chorus of naysayers who thought it wouldn’t go anywhere.

If you want to make a case for mainstream adoption, you don’t have to dig much deeper than those numbers. But just in case that’s not enough:

Reason #2: Store of Value and Scarcity

One of the big reasons that currencies work is that they are a (more or less) stable store of value. And that holds true whether we're talking about fiat currencies like the dollar, commodities like gold or cattle, or digital assets like cryptocurrencies.

And one of the big underpinnings that push store of value is scarcity. The more scarce, and therefore more coveted, the more valuable a particular store of value.

Take gold for example. Due to its relative scarcity and difficulty to mine, it’s usually a pretty good store of value.

This holds true for cryptocurrencies as well. They are in general scarce and difficult to come by.

Reason #3: Safely Built on the Blockchain

When you use your typical bank account to transact business you trust a lot of people and intermediaries: You have to trust that the bank will take care of your money, that it won’t be lost, that their computers will operate correctly, and that they will send payments on time and as instructed.

All told, that’s a lot of trusting. And it’s not necessary with cryptocurrencies.

In fact, because blockchain uses distributed ledger technology, cryptocurrency transactions are duplicated across a vast network of computers, all making sure your money is sent to the right person at the right time. And it’s only until all these computers agree that everything happened as it’s supposed to that your transaction is completed and verified.

In addition, cryptocurrencies are transacted using cryptography, which together with the distributed ledger, make cryptocurrency transactions virtually bullet-proof.

If you buy crypto, go gingerly

Sometimes a picture(s) is worth a thousand words... 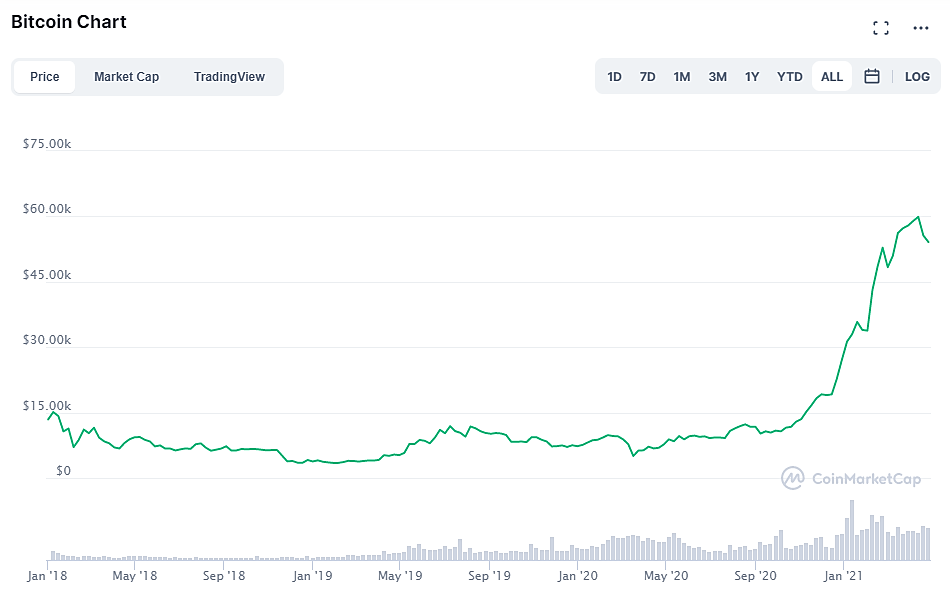 As you can see from this chart of BTC, the cryptocurrency recently meandered between $4K and $12K for the better part of three years before going parabolic last Fall. There’s no doubt about it, that is scary.

This chart shows the standard deviation of BTC daily returns. A recent reading of 2.75% means that BTC’s daily returns fluctuate 2.75% per day over the last 30-day period. Once you do the math on that one, you find out that BTC is a super-volatile asset to own.

So, if you take the plunge and buy cryptocurrencies, including BTC, make sure you do so very gingerly. I’d say no more than 1% to 2% of your portfolio at the most. That would be enough to keep your interest, but not enough to keep you awake at night.

In my next issue, we’ll take a look at a cryptocurrency that should be in just about every investor’s portfolio. We’ll get into the nuts and bolts, so if you decide to buy, you can it with confidence.

Disclosure: This contributor does own Bitcoin. This article is the opinion of the contributor themselves. The above is a matter of opinion provided for general information purposes only and is not intended as investment advice. This contributor is not receiving compensation (other than from INO.com) for their opinion.

2 thoughts on “Should You Own Cryptocurrency?”