And right now, it stands a mind-boggling 5.4% annual rate, way above the Federal Reserve's target rate of 2%.

So, as a Bitcoin and blockchain enthusiast, is there something that maybe crypto can do for us as we navigate through increasing inflation?

You bet. And I'm about to tell you why.

Yes, Inflation Is Too High

If you're a fan of moderate inflation, you're probably not feeling great right now. Prices are at levels that haven't been seen in decades.

In fact, right now, inflation stands at an annual rate of 5.4% in September, up from 5.3% in August. And we haven't seen these kinds of levels in a long time. See for yourself... 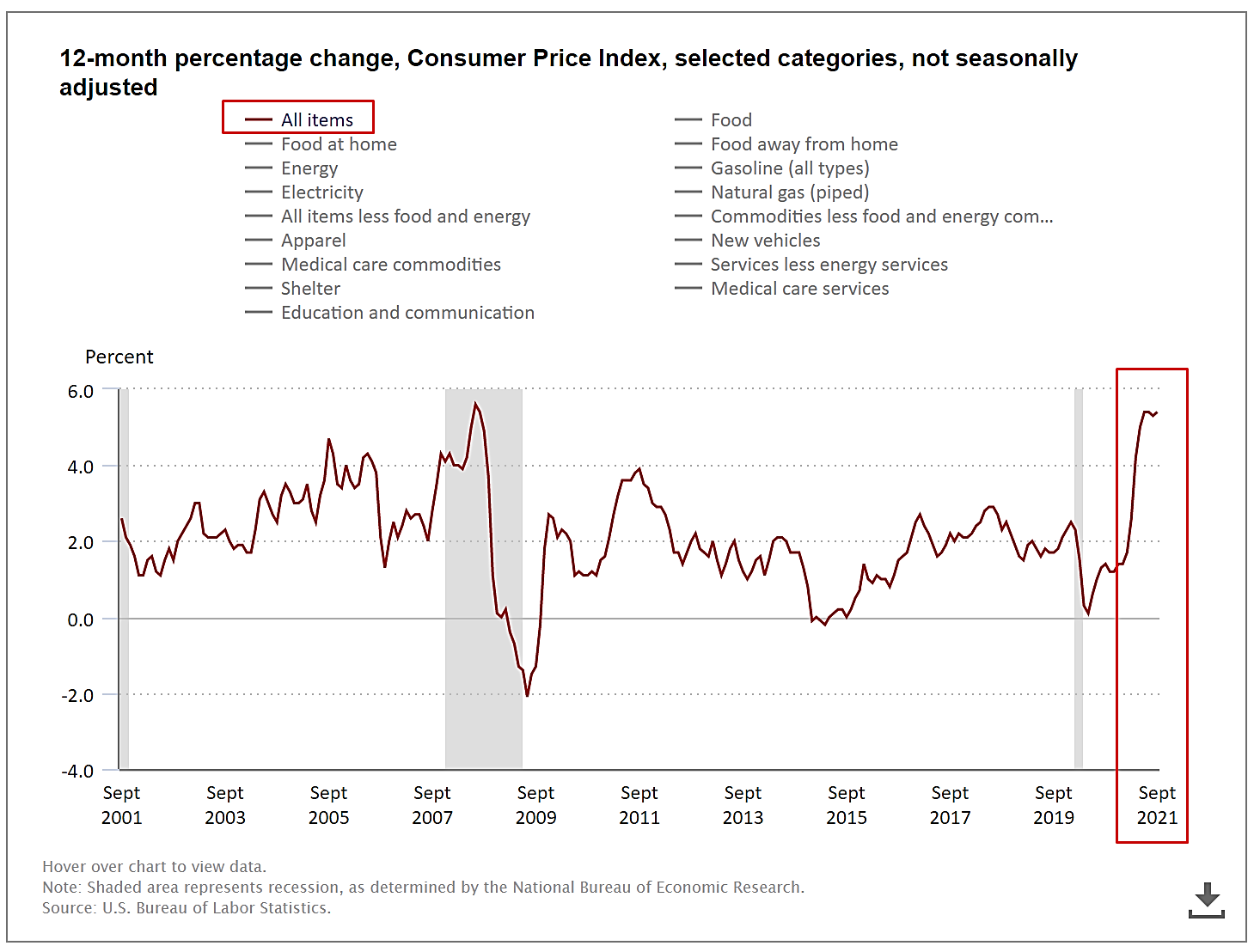 As you can see from this chart, which goes back 20 years, inflation is at record levels. And it's pretty much been on a roll since March 2020. Even if you look at the "core" inflation levels, which strips out more volatile food and energy prices, we're still at nose-bleed levels. 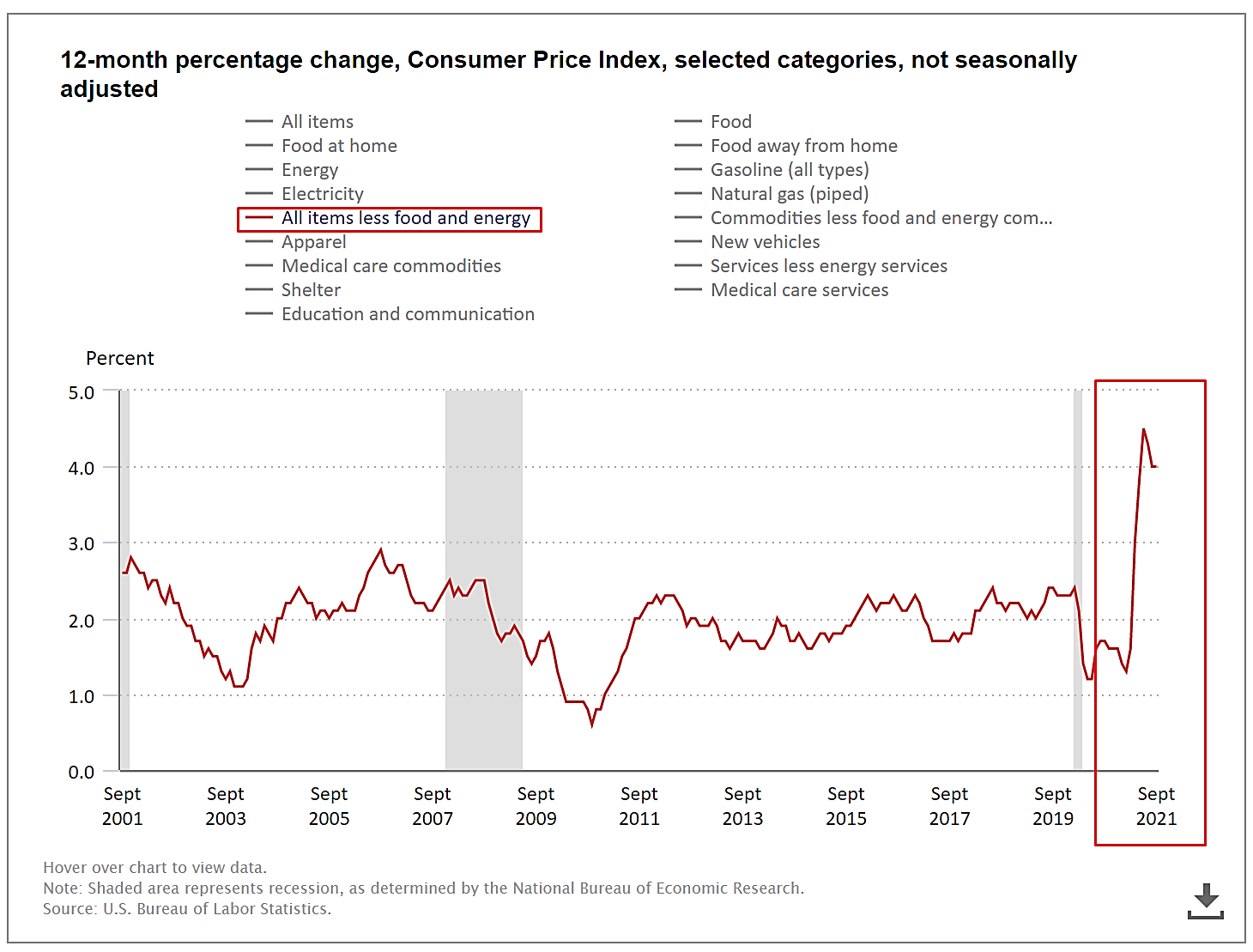 So, is inflation bad? At moderate levels, no. In fact, we like to have a little inflation because it means that both large corporations and smaller businesses have pricing power. So they can raise their prices a bit, pass on profits to the employees, and invest in their businesses. And those are good things.

Rising inflation can also have a positive effect on currency flows. That's because investors anticipate that central banks will raise interest rates to combat inflation. And those higher interest rates can make returns more attractive for people who buy assets denominated in U.S. dollars.

But if inflation gets too high, it's a bad thing that can have a corrosive effect on just about every corner of the economy. Consumers and businesses must spend more dollars on the same goods that were cheaper just a couple of months ago. So people tend to put off big purchases like appliances and cars, which are good for economic growth until prices come down. And as an investor, if your stocks go up by 6%, but inflation is 5%, then you're only ahead by 1%. Not great news.

Right now, inflation is not terrible, but not great either. But the trend, as these charts clearly show, is in the wrong direction. And with broad shortages in labor and supplies still, just about everywhere you turn, we're not out of the woods by a long shot.

Bitcoin Could Be a Decent Inflation Hedge

So, what can you do about inflation?

Investors often look to hedging in their battle with inflation. And that simply means buying assets that tend to go up as inflation goes up.

You can do this by buying stocks in companies that make noncyclical consumer products that are in demand no matter what happens to the larger economy. Or stocks that pay a good dividend.

You can also hedge by buying income-producing assets, like bonds, that are likely to go up as interest rates go up.

And you can buy gold, which is seen as a popular inflation hedge, but frankly has a spotty record.

But if you throw Bitcoin (BTC) into the mix and take a look at what's happened over the past year, the biggest crypto looks like a helluva hedge against inflation, way better than those I just mentioned. Here's what I mean... 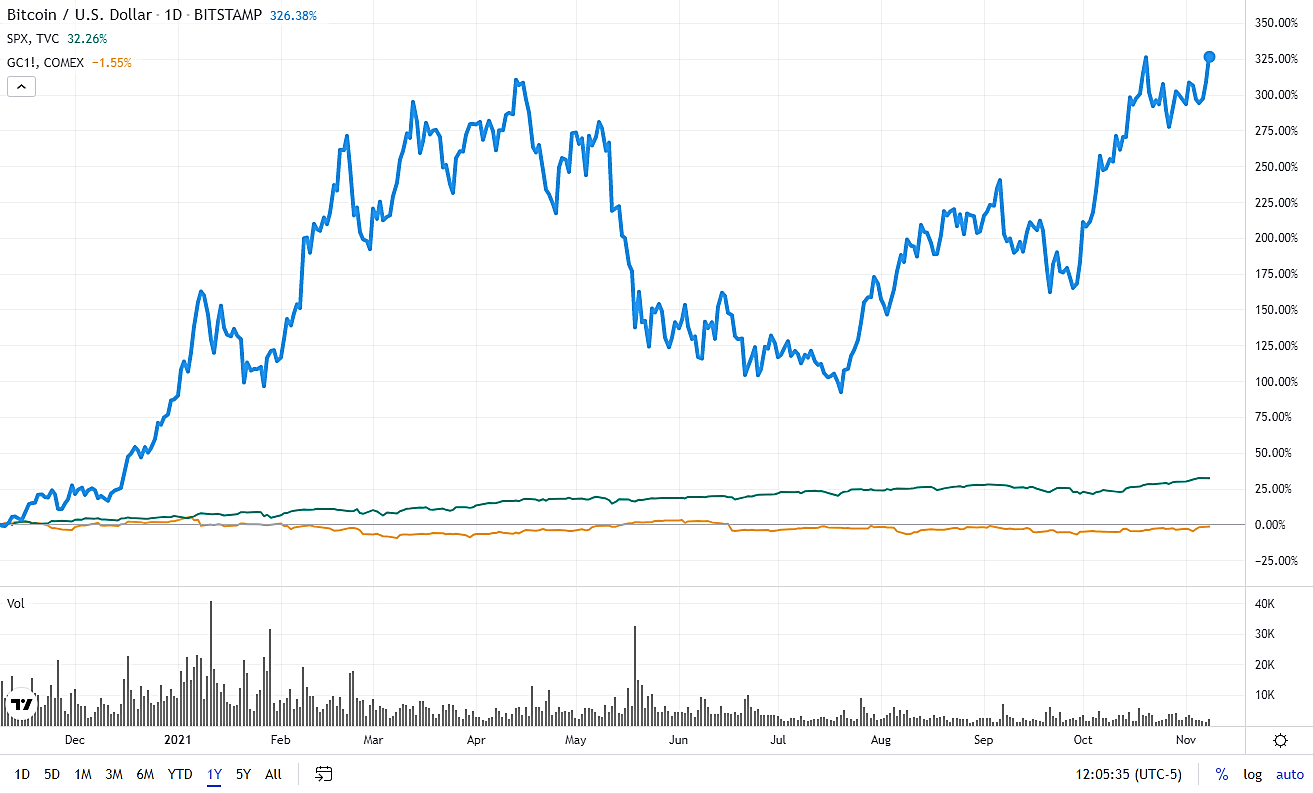 This chart compares the performance of BTC against the S&P 500 and gold (front-month continuous futures contract) over the past year. During that time, gold has lost about 3%, the stock market is up about 31%, and BTC is up a mind-boggling 327%.

So, as inflation has hit record highs, BTC has managed to outpace the stock market and gold, two of the most popular inflation hedges.

But this performance isn't the only reason investors should consider BTC as a hedge against inflation. Due to its fixed supply, you can't produce any more of it. And that means that unlike fiat currencies like the U.S. dollar, BTC can't be devalued by simply making more of it.

Should I Buy BTC As An Inflation Hedge?

For more investors, probably not. If you stick to the rule of devoting no more than 1% to 2% of your portfolio to crypto, that allocation alone prevents it from being much of an inflation hedge when compared to your whole portfolio.

Plus, even though the last year has seen BTC go to the moon, don't overlook the inherent volatility and uncertainty in the price of BTC. The chart clearly shows that even though it's outpaced the stock market and gold, it's been a wild ride. And certainly not one for the faint of heart.

And finally, while inflation is high and certainly looks like it may go even higher, it's time to keep an eye on it, but not necessarily time to begin tactical moves in your portfolio.

3 thoughts on “Is Bitcoin An Inflation Hedge? Maybe...”