Are we headed into a period of stagflation? How will the Fed raise rates and taper this inflationary pressure? These are big questions with complex answers. 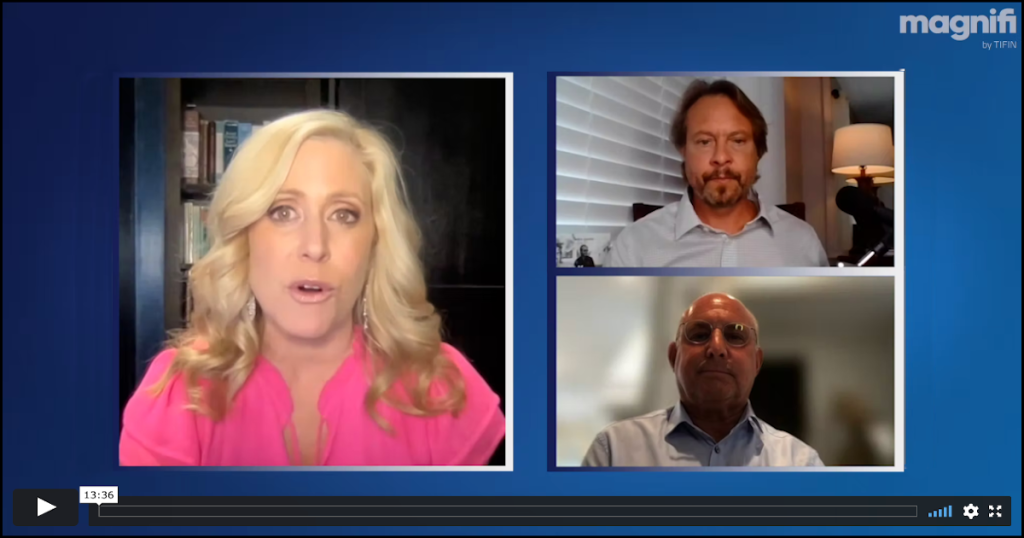 Melissa Francis
Welcome back to Magnifi by TIFIN. Today, we are talking about oil, China, inflation, the Fed, and the best strategy is to incorporate all of that into a portfolio to grow and preserve your wealth. Joining me now is Kevin Simpson, founder and CIO of Capital Wealth Planning and Gary Kaminsky, former Vice Chairman at Morgan Stanley, former Capital Markets Editor at CNBC. Gary is also an investor and a board member at TIFIN. Welcome to both of you. Let me start with you, Kevin. I don't know if you just heard Jeffrey Gundlach, he had a lot to say. Some of it was a little frightening. He was talking about the idea that we are heading into an era of stagflation. And he's not alone in that, but he does think that the Fed will continue to be very aggressive as that goes on. And even as we head into a recession, he thinks that they'll continue to raise rates and stay disciplined. Do you agree with that?

Kevin Simpson
Well, I don't think they have much of a choice, Melissa. And it is an incredible thing to think about. I've been in this business for 30 years and we're literally talking about the textbook stagflation. I mean, it's an odd combination, a contracting economy with rising rates. And can they do it successfully, can they navigate us through that is a tremendous question. But to say that they have no choice isn't even up for debate. I mean, we have to begin to taper this inflationary pressure and the only way for the Fed to do that is to begin raising rates. So to your point, it's a scary proposition, but I think it's probably the only rational choice at this point.

Melissa Francis
Boy, but that is just going to be such a tough pill to swallow. Gary, do you think that the Fed has the political will to follow through with that? I mean, I know that they are not supposed to be pushed around by what election is coming, but it's hard to ignore all of those factors, especially if you have folks trying to get reelected. Basically, do you think the Fed has the discipline to follow through?

Gary Kaminsky
Well, I think Jeffrey made an extremely important point which was that what's going to happen after the Fed starts raising rates, as they continue on this path that they've outlined, and we are in a recession, once again, cutting rates is not going to solve for economic growth. So he more or less told you, what started in the financial crisis with quantitative easing, and I can't even remember what we're up to, maybe Kevin can. If we're up to QE five or six at this point, when you take the stimulus programs necessary for COVID, he basically told you that we're going to create, once again, while we have not even gotten inflation down to the low levels that they want, we're going to be pumping more inflation into the system because we're going to be necessary to have further quantitative easing. To me that was scarier than the idea that we're going into stagflation as it relates to owning assets and trying to figure out where to hide money to grow it over the long term.

Melissa Francis
So Kevin, if you believe all this, I mean, what is your strategy? How do you prepare for this?

Kevin Simpson
Well, it's really a question of how do I keep pace with inflation? Because that's the known entity we know is coming. We know prices are going to continue to be elevated for some time. It's not any longer a transitory issue. I mean, it is a straight up real issue. If they can begin to taper at some point, that's wonderful. And I think it probably can, considering we're starting from a complete economic shutdown. But the reality for investors is how do we invest in an inflationary environment? What's the hedge against inflation? Could it be fixed income?

Possibly. Certainly commodities here have been an incredible hedge, but that has a lot to do also with what's happening in Russia and the Ukraine. So for me, in how I manage money, the one thing I can control is dividends. And it's not just investing in companies that pay dividends. More specifically, Melissa, we look for companies that are increasing their dividends over time. So you at least have a little bit of an inflationary hedge there from the standpoint of dividend growth. And I think that might be a real secret to the engine for the foreseeable future, for people that are looking for an income stream, but really faced with this inflationary pressure.

Melissa Francis
But do they keep doing that if the economy contracts though? That's the only thing. I mean, if we head into a recession, you say you look for them increasing dividends, can they still do that if we're looking at stalled economy...