Gold prices have been moving to a higher value at a pace not witnessed in quite some time. On Monday, gold futures basis most active April 2022 contract opened at $1920 and closed at $1900 after recovering from a low of $1893. On Tuesday, gold prices gained over $40 and accelerated the defined uptrend that began the first week of January. The rally has continued today.

When added to the price advance of January 31, that accomplishment reveals a profound fact. In just over one month (January 31 to February 4), gold prices have gained $194.90, a percentage gain of 10.94%. 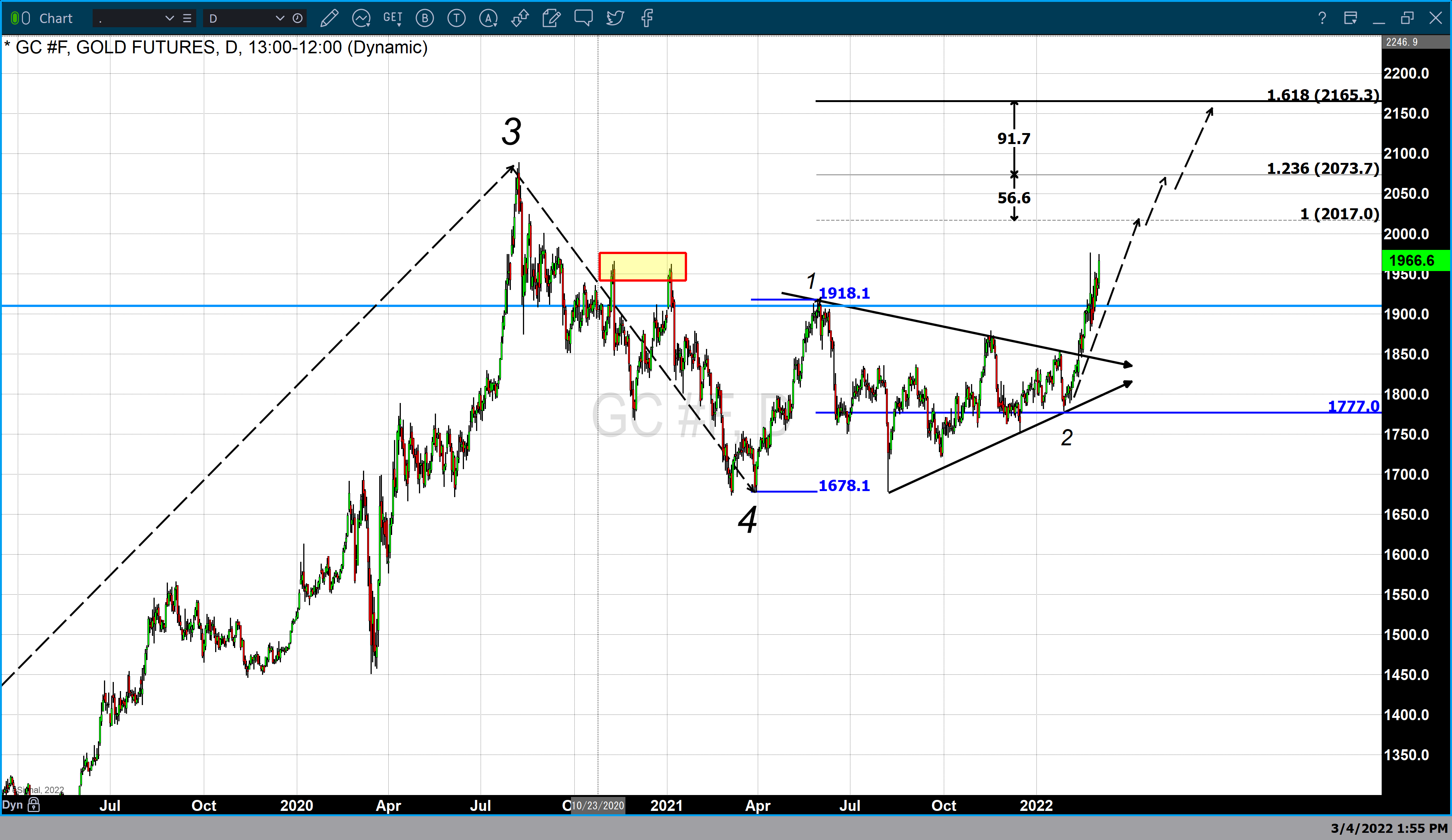 Gold Is One Of The Most Intrinsic Safe-Haven Assets

Gold is both an excellent hedge against inflationary pressures and reacts quickly to geopolitical uncertainty and rising inflation. The recent gains in gold are based upon its sensitivity to both a surge in inflation and a geopolitical crisis.

In this instance, it is the combination of these two events occurring simultaneously. This synergistic effect of both geopolitical uncertainty and the existing inflationary pressures simultaneously has magnified gold's influence on the global economy.

Most alarming is that the geopolitical crisis in Ukraine has added another layer to inflationary pressures. The invasion by Russia into Ukraine was unthinkable just a few months ago. Not since World War II has a sovereign country invaded another sovereign country under false pretext. While Russia claimed their actions were to act as peacekeepers to protect the pro-Russian separatists in eastern Ukraine, they announced that these two areas are now independent countries. But the truth is that the intention of Russia was to destroy its military and overthrow its government to install a puppet government sympathetic to Russia.

Prior to the invasion by Russia into Ukraine, inflationary levels were already at a 40-year high. Recent data has shown that the CPI (consumer price index) has reached 7.5% YOY. This is the highest level of inflations since February 1982. Based upon recent events, it is an absolute certainty that inflationary levels will spiral to yet an even higher level.

The primary catalyst which will take inflation higher will be directly attributable to two primary factors first, the rising cost of crude oil, which is now trading at $115 per barrel. Secondly, Ukraine's ability to produce agricultural products to export to Europe has been diminished or obliterated.

From December to February, in the short span of three months, a barrel of crude oil cost rose 43.97% more. Even more alarming is that oil has gained 19.60% in the first four trading days of this month. That equates to an average daily gain of 4.9% from Tuesday, February 1 to Friday, February 4.

It's a fact that higher prices in oil dramatically influence the cost of growing and transporting food. These costs have risen dramatically, exacerbated by the current conflict in Ukraine. Ukraine has, in essence, been a major component supplying agricultural products to Europe. The current crisis has had a dramatic impact on the ability of Ukraine to continue providing agricultural necessities to Europe.

Conclusion: Spiraling Inflation And A Prolonged Invasion Will Be Devastating

The obvious takeaway from the effect of the Ukraine conflict on current levels of inflation is profound. It most certainly almost guarantees that inflationary pressures will continue to spiral to higher levels causing extreme hardship to global citizens who require these goods for survival.

For the reasons we have spoken about above, gold has had such a stellar performance and dramatic price increase. The precious yellow metal is truly acting as a safe-haven asset that should continue to gain value as a hedge against other investment classes in times of political uncertainty and high inflation levels. The sad truth is that the current conflict in Ukraine most likely will not have a quick and peaceful resolution. It will take an extended period of time to come to an end.

Based upon that assumption that the Ukraine/Russia crisis will not be resolved quickly and that current levels of inflation will continue to spiral to higher levels is almost a certainty. If that assumption is correct, it is easy to assume that at some point soon, gold will challenge its all-time high of $2088 and trade to a new record high price.