The most recent jobs report supports aggressive Fed rate hikes, to reduce inflation, but other factors need to be resolved to solve the big global picture.

The Bureau of Labor Statistics released some welcome news today. 431,000 Americans became gainfully employed in March, and the jobless rate was within 0.1% of 3.5%, coming in at 3.6%. Economists polled had forecasted that over 500,000 jobs would be added. However, that has little relevance with today’s report indicating that the labor market in the United States is vibrant and strong. The strength of today’s report shows that America’s workforce is now only 1.6 million jobs, or 1% of the levels that existed before the pandemic. It must be noted that higher employment is a byproduct of a tight labor market that has had to offer higher wages to attract new workers.

This solid report will give the Federal Reserve the necessary data to continue to raise rates, most likely at a much more aggressive rate. However, the Federal Reserve will have a near-impossible mission to have a soft landing as they reduce the current inflation rate to an acceptable target rate which has been 2%.

Today’s report has resulted in a strong decline in gold pricing, with the most active June 2022 futures contract declining by $25.50 or 1.31% and is currently fixed at $1928.50. The vast majority of today’s decline was a direct result of selling pressure, with 0.2% of today’s 1.31% decline resulting from dollar strength. 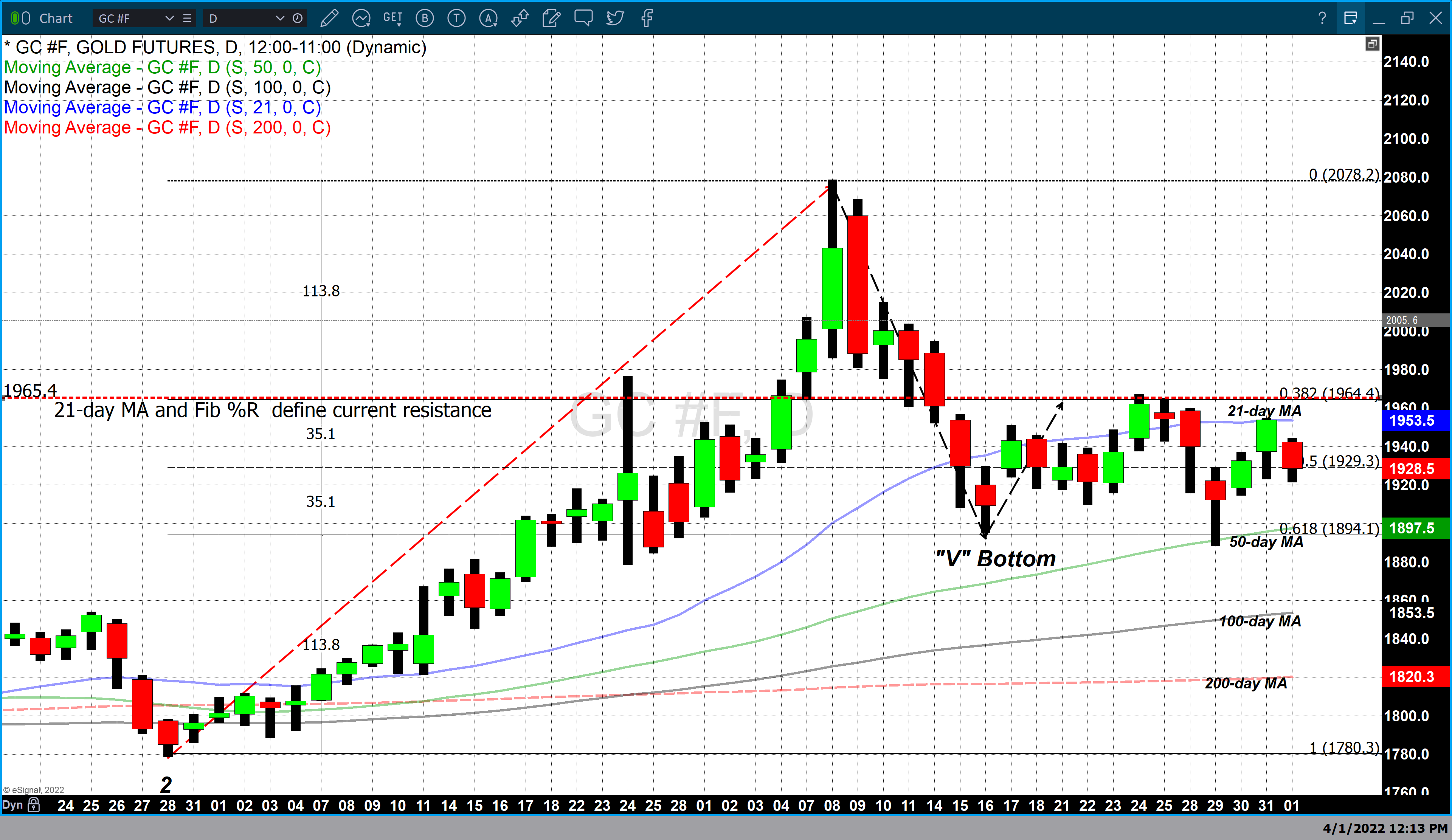 Inflation is at its highest level since 1981. This exceedingly high level is the result of a series of events that occurred one after the other. Together these events and factors will result in an inflation level of 9.01% for the first quarter of 2022, according to the Federal Reserve Bank of Cleveland. Moreover, their studies indicate that the CPI index will surge to 8.41% year-over-year in March.

The exceedingly high level of inflation, which was the byproduct of the global pandemic and following recession, has now been magnified due to Russia’s invasion of Ukraine. Moreover, this military action will greatly affect Europe more than the United States due to their dependence on importing agricultural products from both countries, and oil, natural gas, and gasoline from Russia.

Since the military action began, Ukraine has long been considered to be the breadbasket supplying European countries with wheat and other agricultural products. As a result, Ukraine’s production has, in essence, come to a hard stop. While Russia still produces oil and its derivatives for exports, the United States, along with the European Union, has, for the most part, boycotted Russian exports.

In a more normal crisis concerning inflation, the measures needed to reduce inflation could be accomplished with extremely aggressive rate hikes. However, the complex causes which have led to a 40 year high in inflation alone cannot resolve the issue. Without a resolution to the military conflict between Russia and Ukraine, inflationary pressures in Europe will continue to grow. This leads us to the primary dilemma. Russia is maintaining an iron hand in its demands to withdraw its troops and its barbaric military actions, which have also focused on civilians targets. Their demands are simple first; they demand that Ukraine surrenders. Although Russia has been negotiating, the fact that they continue to bomb cities as they negotiate is a clear indication that negotiation is simply a tactic to have the appearance that they wish to have a peaceful resolution, when the reality is they have used the process of negotiation to resupply their troops. Real negotiations require a cease-fire truce while talks are taking place, and that is not the case. Ukraine also has a steadfast and simple demand: Russia withdraws its troops and stops the murders of their civilians and destruction of their cities.

The geopolitical tension coupled with exact spiraling levels of inflation has exacerbated solutions that would’ve been applicable in the past. Without a resolution to the conflict between Russia and Ukraine, inflation will continue to grow in Europe. The current crisis of geopolitical tension in Europe and inflation levels in the United States approaching 9.1% requires a perfect execution by central banks to create a soft landing and an end to Russia’s occupation of Ukraine. Simply put, you cannot resolve the crisis in its totality without resolving both the high level of inflation and the withdrawal of Russia’s military from Ukraine.