First off, I don’t have to tell you that if you've invested in the stock market, the last couple of months has been downright terrible.

In fact, since the beginning of the year, major stock indexes of every ilk are down. Take a look: 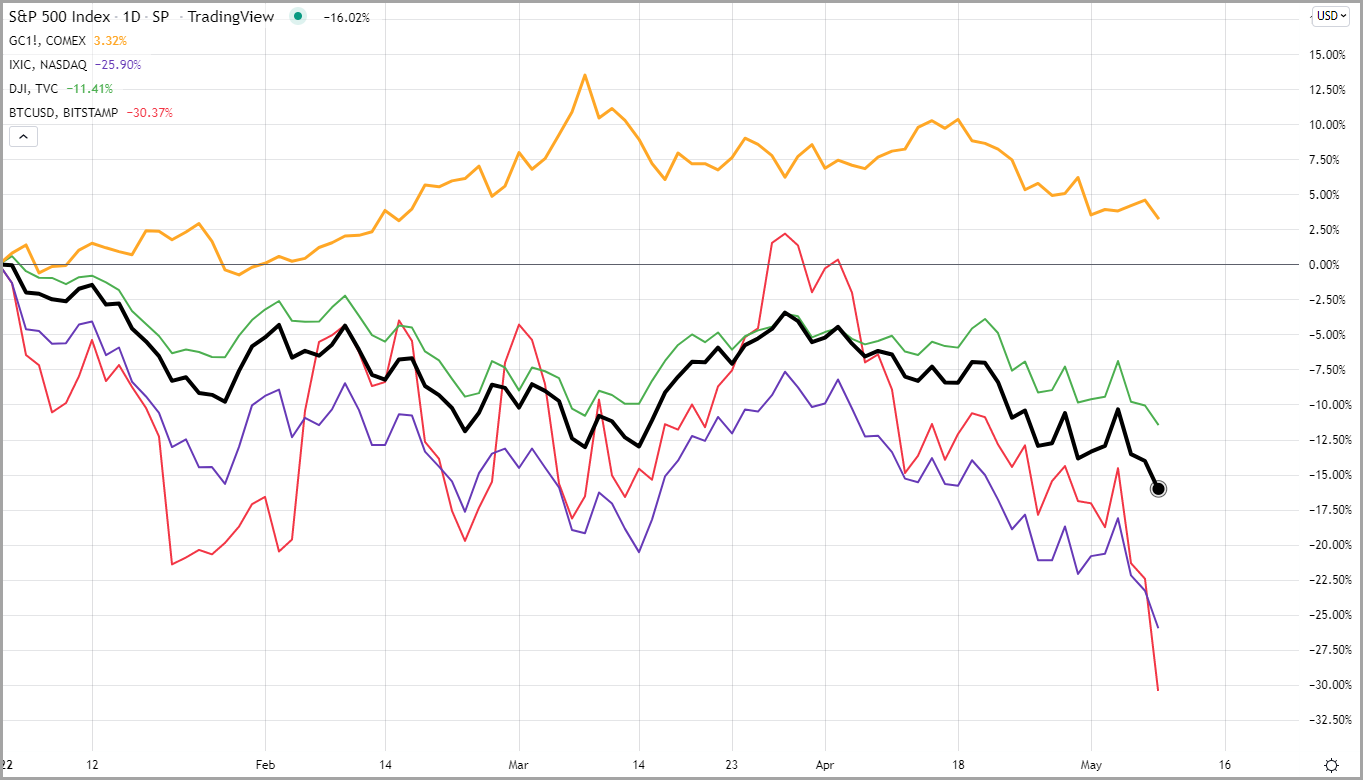 As you can see from this chart, just about everywhere you turn, stocks are getting hammered. Since the beginning of the year, the S&P 500, a good proxy for the broader stock market, is down 16%, the Dow 30 is down 11%, and the tech-heavy NASDAQ is down a whopping 26%. No matter how you slice it, that’s awful.

The drop-off has been so severe that in order to get all these stock indices back in profit territory, you have to take the above chart and crank the time frame all the way back to November of 2020.

Inflation And Uncertainty Are Hammering Stocks

So, what’s up with stocks? One of the biggest reasons in my book is the uncertainty regarding inflation. As I talked about in my recent article on inflation, inflation in March stood at a staggering 8.5% annual inflation rate. That was the biggest 12-month increase since December 1981.

The latest inflation numbers for April are a bit better. In fact, the overall annual rate fell to 8.3% from 8.5% in March. And the so-called “core” rate, which strips out the more volatile components of the food and energy, reversed course as well, falling to 6.2% from 6.5% in April. As a result, the monthly change of 0.3% was also the best in months.

I think prices have peaked. And as the interest rate hikes begin to take hold, even more, you’ll likely see more moderation in inflation. But it’s going to be quite a while before we get anywhere near the target rate of 2%.

That said, we’re not out of the woods yet. And inflation is still wreaking havoc on the stock market.

So, what does inflation have to do with the lousy stock market? For the most part, investors can deal with a little bit of inflation. In fact, a normal rise in the prices of goods and services is a good thing: It shows that companies and businesses can pass on moderate upticks in their costs to their buyers. Plus, it gives them pricing power, which can be an edge in a competitive marketplace.

But if the rate of inflation grows too high too fast, just like we’re experiencing now, it makes the stock market very nervous. And when the stock market gets nervous, investors sell stocks like there’s no tomorrow.

So, why does inflation make the stock market nervous? In my book, there are two main factors:

The first factor that makes the stock market nervous when it comes to high inflation is the nature of inflation itself. As we said, a bit of inflation is ok. But if it’s too much and persists for too long, it makes products and services more and more expensive for people and businesses to buy. And that corrosive effect can wreak havoc on an economy. That’s why controlling inflation is one of the Federal Reserve’s most important jobs.

The second factor that makes the stock market nervous when it comes to high inflation is how the fixes for bringing it down will impact the economy. Since one of the most effective and often used fixes for controlling inflation is raising interest rates, which is happening right now. How those higher rates will impact the economy is a big uncertainty. And that gives investors a reason to sell stocks.

And while higher interest rates often work for taming inflation, they also raise the cost of borrowing. And that can put a damper on the growth of businesses and consumers' spending, two big factors that underpin a healthy economy. Plus, it can raise the specter of a recession. All told, that adds up to even more uncertainty and more reasons for investors to sell stocks.

So, while the medicine we need for inflation, higher interest rates, seems to be working, it’s going to taste nasty going down. Plus, taking that medicine will cause volatility. That’s why I’m not one bit surprised when I see wide swings in prices, often on a daily basis. Your favorite indices can be up 1% to 3% one day and down 1% to 3% the next.

Bitcoin Moving Along with Stocks

If you take another look at the above chart, you’ll also see that since the beginning of the year Bitcoin (BTC) is down right along with stocks. In fact, the price swings of BTC (the red line on the chart) have moved pretty much in tandem with stocks, but with just bigger ups and downs.

Certainly, I’ve been looking for BTC to mature as a store of value and behave a bit more like gold (the yellow line on the chart). In fact, numbers from just last month supported that outlook as BTC moved along with gold for a while. But recent action has pretty much thrown that idea out the window. Over the longer term, I think BTC will still mature as a store of value. It’s just going to take time.

Speaking of gold, the chart also shows that up until early March, gold (the yellow line on the chart) was behaving just like you thought it would during times of high uncertainty: It was moving in opposition to stocks. So, when stocks went down, gold went up. It looked like a classic hedge against stock volatility and inflation if you were a stock investor.

But since early March, gold has fallen from a high of up 9% up year-to-date to just 3% up year-to-date. So even though it’s a classic store of value and the asset of choice in times of uncertainty, gold has recently been moving down right along with stocks and BTC. And that tells me that while gold may act like a hedge some of the time, it’s not a cure-all.

Here’s What To Do

In my book, the best way of dealing with inflation is to heed my golden rule. And that rule is simple: Buy companies that know what they’re doing in markets that have strong upside. And while you’re doing that, make sure to dial up the time frame to long-term. Unless you’re a day trader, taking a long-term view is the best recipe right now. I also wouldn’t be buying new stocks or adding to new positions. That time will come, but it’s not here right yet.

One thought on “Here's Why Stocks And Bitcoin Are Down”