Last September, the Congressional Research Service published an "In Focus" report. They had already attempted to address speculation about the dollar's dominance in the face of global economic and geopolitical changes at the time.

Three major threats were addressed in that document.

China and its currency have risen to sixth place, accounting for 1.66% of global payments.

"To date, there is no evidence of a shift away from the US dollar as the dominant reserve currency," the study concluded.

Back in October, I shared my most recent update for the dollar index, as it hit the first target with a fresh outlook.

At the time, I proposed two paths for the dollar: a continuation to the next target of $121 on an aggressively hawkish Fed, or a consolidation before resuming to the upside. The majority of readers supported both paths, with the consolidation option coming out on top.

The question of the dollar's dominance is resurfacing these days, as its value has plummeted dramatically. It is too early to tell whether this is a consolidation or a global reversal.

One thing is certain: the path of unending growth has been abandoned.

In my charts, I see a clash of perspectives. The technical chart is about to give a strong bearish signal. The chart comparing fundamental factors, on the other hand, supports the king currency's continued strength.

Let me show you each of them one by one, beginning with the emerging bearish alert.

We can see that the short-term blue line very closely approached the long-term red line from above last week. When it falls below the latter, a bearish pattern known as a "Death Cross" will form. It will indicate a downward shift in the trend.

Furthermore, the RSI indicator failed to cross above the critical 50 level when the December Bullish Divergence played out.

The first support could be near the $100 round number. The previous high of $97.4 established in January of last year is the next support.

Let us now compare the real interest rates of the dollar's major competitors. 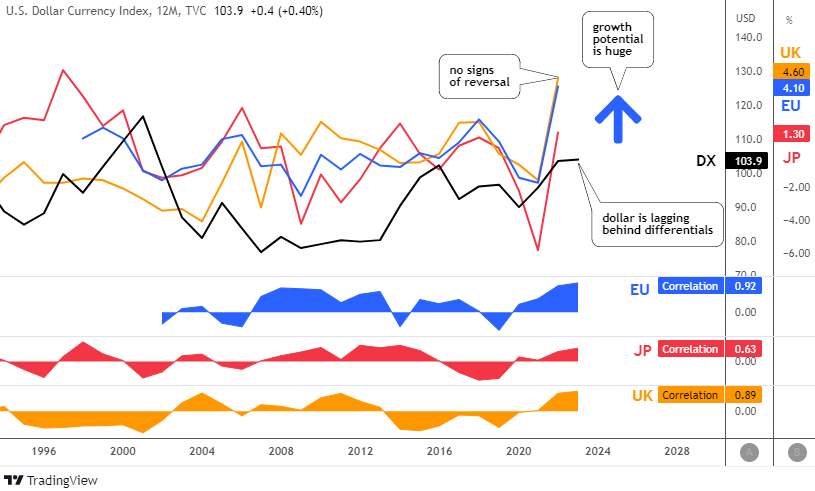 The yearly chart of the dollar index (black line) above is compared to the real interest differentials of the major components of the US dollar index.

This time I added the correlation ratios with interest rate differentials in the same colors.

Currently, the strongest correlation of the dollar index is with the real interest rate differential between the United States and the Eurozone (blue), which is close to absolute at 0.92.

The second highest reading is 0.89 for the US-UK (orange), and the lowest but still positive correlation is 0.63 for Japan.

All of the correlation ratios are at their highest points.

All differentials are rising and at higher levels than in October, which should help the dollar. For the first time since 2019, Japan's reading has risen above zero. The dollar index is lagging far behind E.U. and U.K. readings, which point to the $130 area. The dollar's accumulated growth potential is enormous.

4 thoughts on “Is Dollar's Dominance Over?”