We have an interesting situation in the market as the strength of inversely correlated instrument didn’t push the other asset price down. Such things happen, and I showed you in the past that the correlation itself is not a dogma. The market flows are driven by investors’ sentiment, which in turn is based on subjective judging.

Let’s see the updated charts below, and the US dollar index (DXY) will be the first. 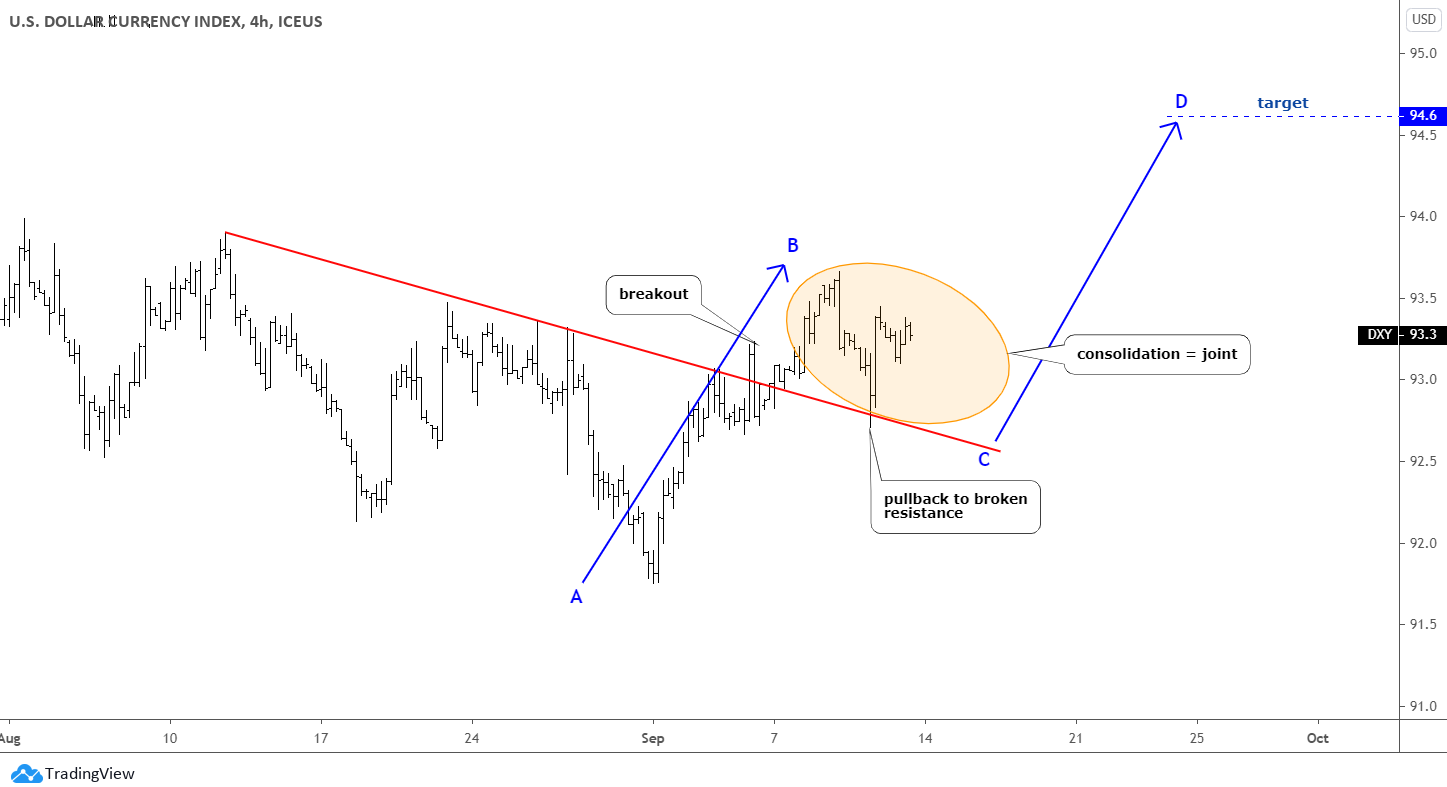 The votes under my previous post about the next move for DXY were split evenly between “break up” and “another drop” options. It’s quite a natural outcome as we never know for sure if a breakout would happen or not. The extreme bullish divergence on the daily RSI finally enforced the price to break up the red resistance. END_OF_DOCUMENT_TOKEN_TO_BE_REPLACED

Copper futures in the December contract settled last Friday in New York at 3.0620 a pound while currently trading at 3.0370, down about 250 points on high volatility as prices are still hovering right near a 2 year high.

If you take a look at the daily chart, the uptrend line remains intact coupled with the fact that prices are trading above their 20 and 100-day moving average as this trend is strong to the upside even though prices have stalled out over the last couple of weeks.

I have been recommending a bullish position from around the 3.0140 level. If you took that trade, continue to place the stop loss under the 2 week low on a closing basis only at 2.9535 as an exit strategy chart structure is outstanding. For the bullish momentum to continue, prices have to break the September 1st high of 3.0945, in my opinion. I still believe the risk/reward is in your favor for a bullish position as this commodity at the current time is following the stock market, which has showed some high volatility to the downside over the last several days, keeping a lid on prices.

Silver futures in the December contract settled last Friday in New York at 26.71 an ounce while currently trading at 26.92, up slightly for the trading week as prices continue their sideways trading action. END_OF_DOCUMENT_TOKEN_TO_BE_REPLACED

The DOW had been up as much as 249 points in early trading Friday before finally succumbing to sell-off pressure following the NASDAQ and S&P 500 lower in afternoon trading. As this video was recorded, the DOW was flat, drifting in and out of negative territory. The NASDAQ was down over -1%, and the S&P 500 was down -.39%. But the real story is the Trade Triangles.

At the beginning of the week, all three indexes triggered new red weekly Trade Triangles indicating that a move to a sidelines position is in order for the market. The Trade Triangles were triggered when the S&P 500 lost -2.7%, the DOW -2%, and the NASDAQ -4% as tech continued its sell-off from the previous week.

On a weekly level, all three indexes are looking at weekly losses of over END_OF_DOCUMENT_TOKEN_TO_BE_REPLACED

The Fed recently enacted what the experts are calling a historic policy change. More accurately, it’s the official acknowledgment of what the Fed has already been doing, namely keeping interest low, seemingly forever. What it also means is that it sharply alters the old 60-40 investment mix, to something more like 80-20 or 80-10-10.

The Fed is basically assuming that inflation will be nonexistent – or, at least manageable – for the foreseeable future and is, therefore, willing to let it run “hotter” for longer than it used to before it steps in and raises interest rates. But is that a realistic assumption? Nearly unanimously, Fed officials have been touting the party line that the economy is bad – despite numerous reports that show it is snapping back pretty strongly – and is likely to stay that way or get even worse – which may not be the case. The stock market certainly doesn’t seem to be buying that.

What the Fed seems to be doing is baking in the cake its already oversized role in the economy (and society) and keeping it that way “for as far as the eye can see.”

As I noted in my previous column, cynics might draw the conclusion that the Fed is purposely dumbing down its economic forecasts so as to cement its role for the long-term. Jerome Powell’s streamed announcement at the Jackson Hole summit pretty much made that de facto.

So what does that do for your portfolio? Given that the Fed has now determined that rates will stay low for the foreseeable future, do bonds have any place in your portfolio? What would be the point? END_OF_DOCUMENT_TOKEN_TO_BE_REPLACED

The summer sure has flown by. It was full of events, and we got a new all-time high gold price then. The fall should be an interesting season, as well as “The Volcano Awoke” for precious metals and more “eruptions” are expected ahead.

I updated the charts for you below, and the US dollar index (DXY) daily chart will open this post. 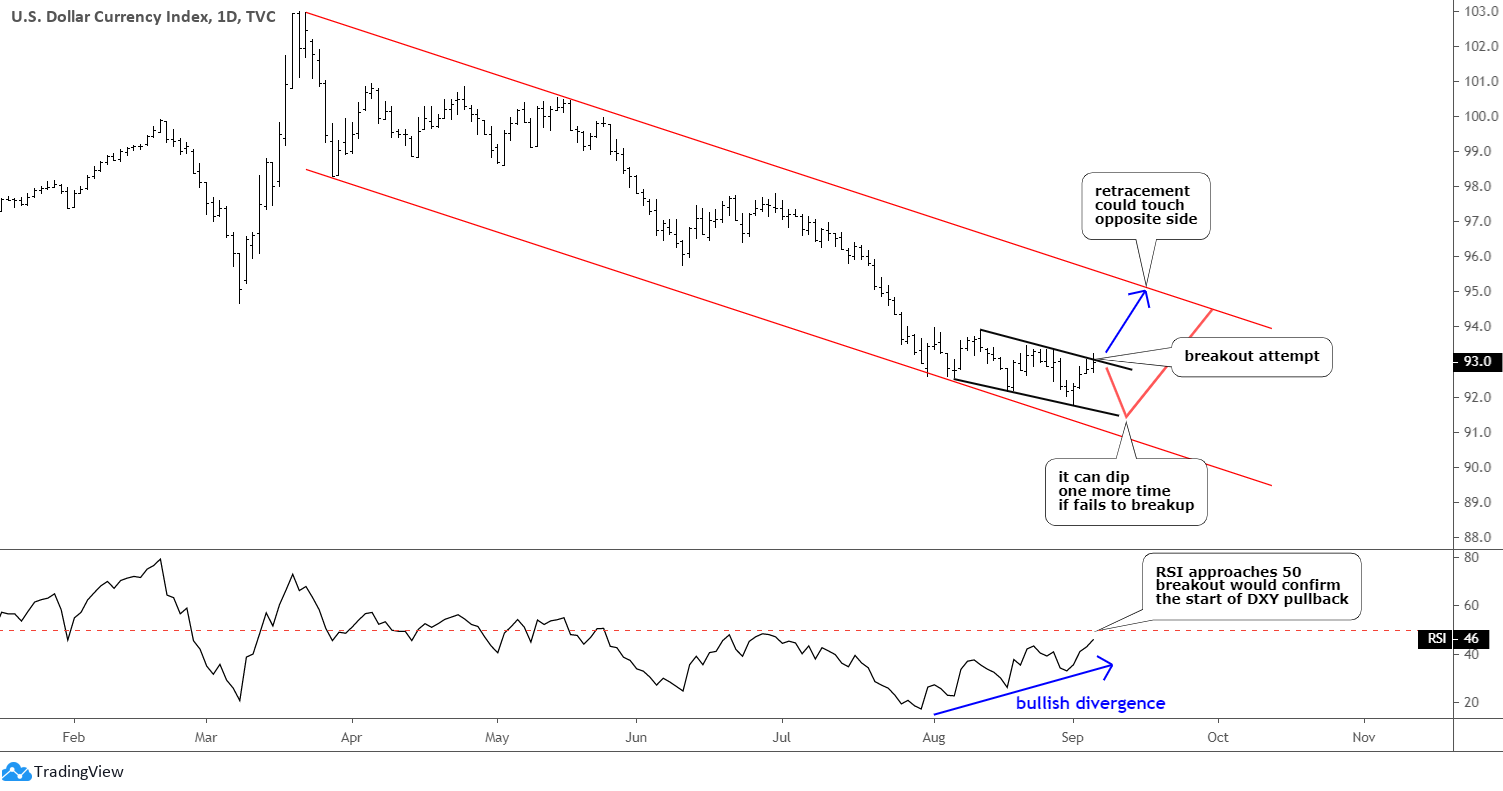 The majority of readers voted earlier that the dollar index will reach the upside of the red trend channel. The second most popular choice that DXY will not exceed the former top of 94 and continue down (Extremely Bearish) paid well as price indeed couldn’t overcome that barrier and dropped again. Then there was another attempt, and another drop as the chart structure has shown seesaw moves within a black channel. It affected the precious metals price as they have been trapped in the sideways zigzags as well. END_OF_DOCUMENT_TOKEN_TO_BE_REPLACED