If you're like me, I've wanted to Apple (NASDAQ:AAPL) stock to my portfolio, but it's too pricey for me to buy at its current level. With Apple's seven-for-one stock split happening after the close of business today, I'm excited to add it to my holdings next week. At the current price, the new shares would be worth $92.12 after the split takes effect Monday.

I wanted ask everyone if they will be....

Please take a moment to vote and leave a comment with your thoughts on Apple's stock split.

After a century of paying bills through the mail, an increasing number of Americans have made the switch to online bill payment systems.

Banks love the system because it reduces their transaction costs, but they now have a new competitor: Bitcoin.

Satellite TV provider Dish Networks (Nasdaq: DISH) has just announced plans to start accepting bitcoin. Overstock.com (Nasdaq: OSTK) and Virgin America also initiated a bitcoin payment option in the past year, and other major corporations may soon follow. That means you're likely to start hearing a lot more about this virtual currency.

For non-techies like me, two quick questions arose: How does bitcoin actually work? And is it a good idea, or just a flavor of the month? To find out, I did a little digging.

Controversial, But Gaining Acceptance
Bitcoin was launched in 2009 as an alternative to traditional payment systems. While digital payment systems such as PayPal conduct transactions in hard currencies (such as the dollar), bitcoin is an entirely new form of currency. END_OF_DOCUMENT_TOKEN_TO_BE_REPLACED

It is no secret that many tech/Internet stocks have been beaten up over the last several months and that action has pushed the NASDAQ index into a bear market phase. However, not all tech companies are in downtrends. I have three tech stocks that are in decidedly bullish trends and I will be discussing them today.

The first stock I will be looking at is Apple (NASDAQ:AAPL). It would seem that Apple had lost its way since Steve Jobs' passing, but yesterday’s closing over $600 puts a little bit more mojo into the stock of Apple. Now remember, this stock is going to split and there's all kinds of things going on with it. The important element for me is the general trend, which according to the Trade Triangles is positive. 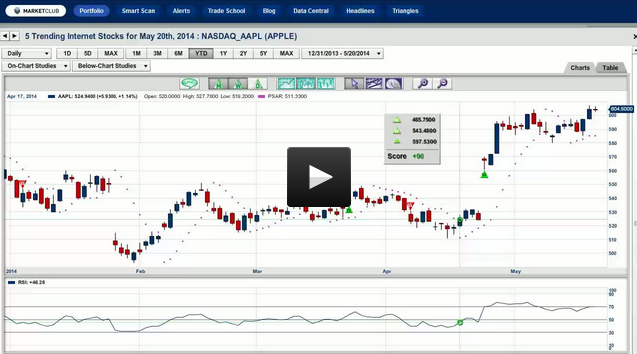 The next stock I will be looking at is Cisco Systems (NASDAQ:CSCO). While not as sexy as Apple, this stock appears to have good upward momentum and looks to be moving higher from current levels. END_OF_DOCUMENT_TOKEN_TO_BE_REPLACED

Hello traders everywhere! Adam Hewison here, President of INO.com and co-creator of MarketClub, with your video update for Tuesday, the 6th of May.

In addition to looking at the regular markets I track, I will be looking at four other stocks. Two of the stocks are in bull trends, while the other two are in bearish trends. All four show you the power of the Trade Triangle technology that we have been perfecting over the years. 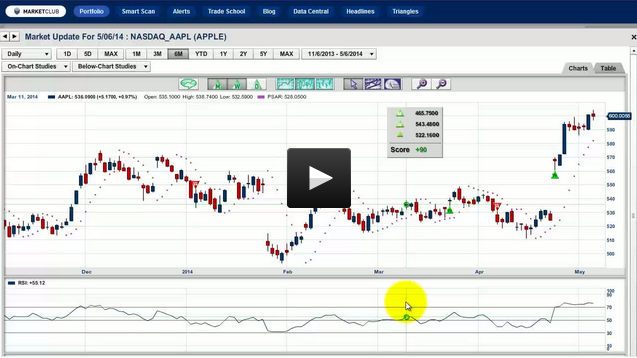 The two bullish stocks are Apple (NASDAQ:AAPL), which I have always liked, and Denbury Resources (NYSE:DNR) which may be new to you, but it's a pretty attractive price and the formation on chart looks very positive. END_OF_DOCUMENT_TOKEN_TO_BE_REPLACED

Hello traders everywhere! Adam Hewison here, President of INO.com and co-creator of MarketClub, with your video update for Monday, the 28th of April.

The current equity markets are proving to be frustrating for many traders as there has been no clear-cut direction for some time. Many of the indices are still in a trading range and could be making major tops. Don't forget, this bull market is now in its fifth year and is getting long in the tooth.

Like many investors, I am still very much concerned about events in Europe and the Ukraine. I think this is contributing to a large part of the indecision in the markets, causing them to move up one day and down next day. 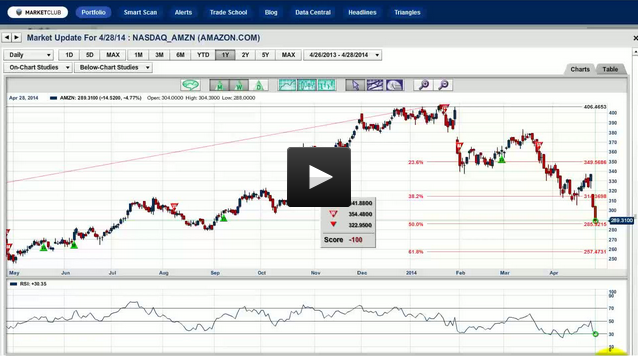 Certainly there has been positive news for stocks, with earnings for many companies looking very good. There is also some disturbing news of a potential slowdown in Europe, along with some not-so-rosy guidance by several companies.