As traders, we are always looking for a trading edge, but sometimes we can overlook the big picture and miss how we can change some fundamental ways in which we approach and make trades.

For myself, one of the key elements is to be disciplined in one's trading. I must say that it’s easy to say, but, it did take me quite some time to master this skill.

Often you want to justify your position, and you listen to someone else who thinks the same way you're thinking, even though you both could be wrong on the trade. When you follow that line of thinking you are doomed, as you tend to keep pointing to the other person and use them as a crutch for a trade that has gone bad. This can create bigger and bigger losses for your account so, much so that it freezes your brain to the point you can’t see other market opportunities. It also gets to the point where you say to yourself, "I’ve lost so much money I can't get out now." This is not the attitude to have if you want to be successful. The good news is there is an easy cure for that, and you must follow it if you are going to be successful.

The one easy cure for this is using stops in the market.

I used to listen to Ron Popeil pitching the Ronco 4000 Showtime Standard Rotisserie on TV and the keywords he always used to say after you put the chicken is was “Set It And Forget It."

I'm not sure if Ron Popeil ever traded in the markets, but his concept of “Set It And Forget It” can be applied to stops. Simply enter your stops and leave them there until either you are stopped out, or you have taken a profit on the position.

You can still take a profit on a position even if you get stopped out… You simply keep moving your stops up as the market moves higher. Doing so helps you lock in a profit when the market reverses. So use Ron Popeil’s “Set It And Forget It” philosophy for your stops. It could be the difference between eating chicken and having nothing to eat.

The other key thing to trading is to trade END_OF_DOCUMENT_TOKEN_TO_BE_REPLACED

What is interesting about this market is the fact that it has broken above a two-year base, which I believe is very significant longer-term. With the recent pullback from the highs of $27.64, we actually stopped at the previous highs that were set in October 2012 and again in May 2013. Technically, this market looks very good and I am going to layout my case with simple numbers you can tie into the chart. 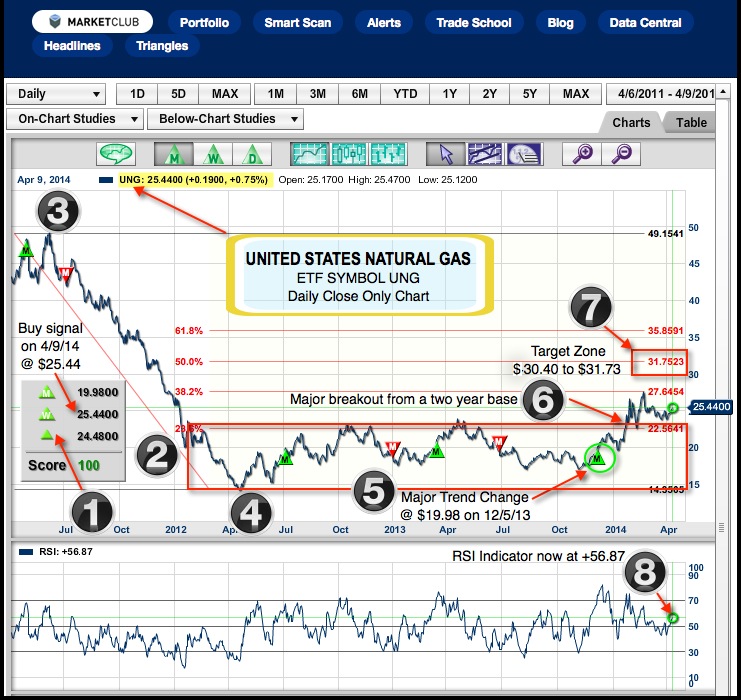 If you're reading this, then you clearly have an interest in improving your trading returns. One of the surest ways to do that, is not so much by picking the right stock to invest in, but rather incorporating sound money management principals into your trading.

We recently had a MarketClub member on the Members Blog who was claiming that he had lost a tremendous amount of money using the Trade Triangles, trading in the FX market. Doing the math, I just couldn't figure out or understand how he could have lost the money he claimed he had lost. I thought that the matter was closed until one of our members came back with a reply. Frankly, it is a perfect reply and one that applies to everyone who has traded or is presently trading.

Yesterday, I went to the Apple(NASDAQ:AAPL) store to ask them about the new iPhone 5S and to see if they had any in stock. I was told that they no longer sold the iPhone in the store and that I had to order one online. I was somewhat taken aback by this, but then it all sort of made sense to me when I thought about it.

I think the demand for the iPhone 5S, the gold edition in particular, has been off the charts and I think we're going to see a tremendous number of iPhone sales in the fourth quarter. Having checked out the Apple store, I decided to go to Best Buy to see what they had in the iPhone 5S market. It was pretty much the same story, you have to order online and you can pick it up at the store. This makes a lot of sense because Apple can then deliver what people want based on their online orders. This allows Apple to ramp up its production to meet demand.

The market action recently for Apple (NASDAQ:AAPL) has been choppy, which I believe is a good thing, as Apple sets itself up to move higher. I have been looking for Apple to move to the $550-$560 area or higher. That target zone is still in effect. The battle lines are drawn and I know that if the market does not rally strongly today, the new trigger point for Apple next week is going to be the $497 level. Once over that level, this market could take off and move very quickly to higher levels.

Doubtless, you may have heard some of the problems that have been circulating in the press about the new iPad retina displays, and that they're going to be delayed coming to market. This is likely just a technical glitch that could have been caused by one supplier. I think that demand for the smaller 7in retina iPad is going to be very big both here and overseas.

Lastly, like thousands of loyal Apple fans, I still don't have an iPhone 5S Gold, but I want one. I guess I'm going to have to break down and order online and wait for it to be delivered to the local Apple store. One thing I am really enjoying a great deal is the new iOS7 operating system. Apple has done a masterful job of changing its old and aging operating system into one that really is cutting-edge. The fact that it can run on the new 64-bit A7 chip and the old 32-bit chip is a testimonial to Apple's technical expertise.

As you can see on the chart, I have drawn a line in the sand for Apple and when this line is crossed it will turn our intermediate weekly Trade Triangle green, indicating a resumption of Apple's strong and longer-term uptrend.

If you have any comments or thoughts on Apple, I would love to hear from you!

Have a great weekend everyone and let's watch Apple closely next week, it could be a good one.

Hello traders everywhere! Adam Hewison here, President of INO.com and Co-creator of MarketClub, with your mid-day market update for Tuesday, the 13th of August.

What were these rookie mistakes?
1. No money management.
2. Picking a very public argument with someone in the business who is bigger, more powerful and swings a bigger axe. END_OF_DOCUMENT_TOKEN_TO_BE_REPLACED