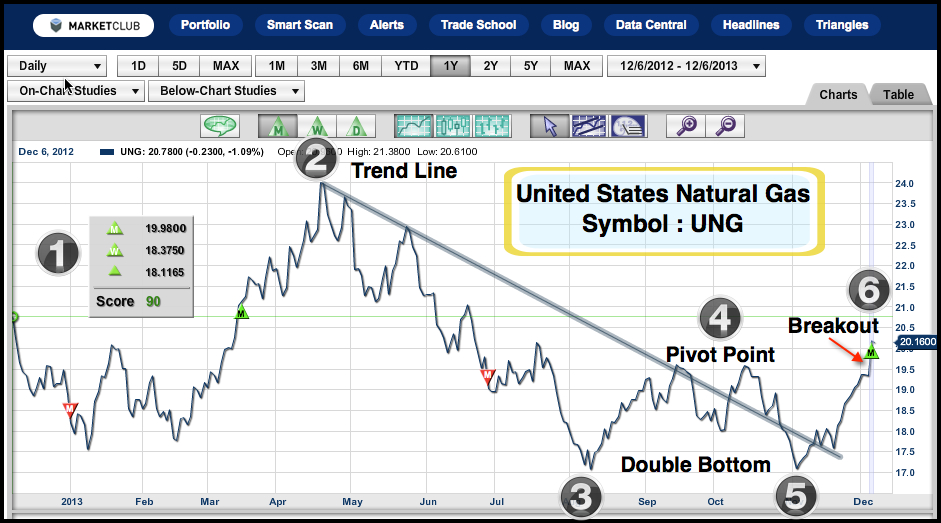 Be sure to add your comments below. Thanks, the INO.com Team

It started snowing early in Siberia.

According to Rutgers University's Global Snow Lab, there is already more than 10 inches of snow on the ground in the massive tundra north of Moscow. That's the first time 10 inches had already fallen by the end of October since 2002. Roughly 900,000 square miles are covered in snow right now, much higher than the 50-year average of 573,000 square miles. END_OF_DOCUMENT_TOKEN_TO_BE_REPLACED

We've asked our friend Jim Robinson of profittrading.com to provide his expert analysis of charts to our readers. Each week he'll be analyzing a different chart using the Trade Triangles and his experience.

Today he is going to take a look at the technical picture of the December Natural Gas Futures (NYMEX:NG.Z13.E).

I hope you are having a GREAT week !

This week we will take a look at December Natural Gas.

The Energy Report: A large number of photovoltaic (PV) manufacturing firms went bankrupt during the past year. What is the outlook for solar energy firms?

Pavel Molchanov: Most of the solar bankruptcies that took place in the U.S., Europe and China have occurred among companies that manufacture solar modules. But it's important to note that a bankrupt company does not necessarily shut down production. About 75% of these companies, as measured by production capacity, have continued to operate, either on a stand-alone basis during bankruptcy or following an acquisition by a strategic partner.

Take, for example, China's Suntech Power Holdings (STP:NYSE). It was the largest solar manufacturer in the world as recently as 2011. It declared bankruptcy in March, and continues to operate and generate revenue. Solyndra, of course, has been wiped off the face of the earth. But such liquidation is a very rare outcome for large solar companies that take temporary refuge in bankruptcy.

The Energy Report: Bruce, the price of natural gas has remained well below $4 per thousand cubic feet ($4/Mcf). How long can junior and midcap explorers and producers (EPs) of natural gas keep on going at this rate?

Bruce Edgelow: They're in a better place than they were a year before. The marketplace isand I'll hesitantly use the word"enjoying" about a 4550% increase in prices year over year. This new price is, for the most part, bringing producers back to a break-even or a modest return on cash flow. However, they clearly need a more robust price to generate the returns that the market expects of them.

TER: The spread between West Texas Intermediate (WTI) and Brent Crude prices has narrowed to just a few dollars per barrel. How is that affecting the crude EPs? END_OF_DOCUMENT_TOKEN_TO_BE_REPLACED