Healthcare related stocks and more notably the biotech cohort saw a very tumultuous 2016. As the political backdrop, drug pricing debate and presidential election were thrusted into the spotlight, healthcare related stocks responded erratically to any news that would have a perceived impact on the industry. Now that 2016 it’s in the books, investors can look to 2017 and the new administration under president-elect Donald Trump. Since Donald Trump voiced his concerns over drug pricing, the initial rally in healthcare-related stocks has largely eroded to pre-election levels. Initially, the entire cohort saw significant gains as traders viewed a republican controlled government in positive light with regard to the healthcare sector. Considering the aforementioned factors throughout 2016, the iShares NASDAQ Biotechnology Index (Ticker:IBB) traded in a wide range with pronounced volatility after the presidential election posting a range of ~$240 to $344 or a 104-point gap. The upcoming 2017 year is shaping up to be an eventful one with continued uncertainty with regard to the political climate, governmental stance on mergers and acquisitions, potential deregulation, potential restructuring of the Affordable Care Act and a potentially more favorable tax and repatriation rates throughout the industry.

END_OF_DOCUMENT_TOKEN_TO_BE_REPLACED

President-elect Donald Trump has thrown cold water on the recently volatile healthcare cohort as he voiced concerns on rising drug prices. The Trump rally continues to power on as the S&P 500, Nasdaq and Dow Jones continue to break all-time highs on what seems like a daily occurrence. Since Trump voiced his concerns over drug pricing the rally has largely left healthcare related stocks (pharmaceutical companies, pharmacies and wholesalers) behind the overall rise in the broader markets as of recent. The entire cohort has seen significant gains as traders viewed a republican controlled government in positive light with regard to this sector. However after recent comments from Donald Trump regarding the drug pricing debate much of these gains have been relegated to the pre-Trump rally levels. This optimistic perspective has faded after Donald Trump stated “I’m going to bring down drug prices” and “I don’t like what has happened with drug prices”. The iShares NASDAQ Biotechnology Index (Ticker: IBB) has been on a rollercoaster since the day just prior to the presidential election posting a broad range of movement from ~$247 to $293 or a 46-point swing (19% move). Investors were factoring-in a healthcare-friendly government in terms of scrutiny on the merger and acquisition front, deregulation, potential restructuring of the Affordable Care Act and a move favorable tax and repatriation rates throughout the industry. This sentiment has taken a breather to the time being.

Recently, the federal government passed a major piece of legislation that bodes well for the industry. This legislative passage of the 21st Century Cures bill is a preverbal commitment by the government that they stand behind the efforts of industry and government in curing and treating diseases. The 21st Century Cures bill cleared the House and Senate and is aimed at easing FDA drug and device approvals and includes funds for NIH, cancer moonshot and a precision medicine initiative. This bill should provide an industry-friendly regulatory backdrop for drug and medical device companies moving into the near future. This bill provides $6.3 billion that supporters say will spur medical innovation, speed access to new drugs, expand access to mental health treatment and battle the opioid epidemic in America. The bill had widespread bipartisan support, including the backing of the Obama administration. Critics of the bill contend that it provides huge handouts to the biotech and pharmaceutical industries. Taken together, this bill in concert with a perceived pro-industry government coming to fruition should provide a tailwind for companies in this space.

The drug pricing debate is clearing not going away anytime soon and will likely persist into the new administration. Donald Trump has made that clear during his interview with Time Magazine for his Person of the Year award. Pharmaceutical executives seem to have taken note of this and are attempting to get out in front of the issue. Brent Saunders (CEO of Allergan) has lead the charge in this movement. He vowed to limit drug price increases to single-digit percentages once a year. This seems to be working to some extent with Novo Nordisk falling in-line with a similar commitment. “We hear from more and more people living with diabetes about the challenges they face affording healthcare, including the medicines we make,” Jakob Riis, Novo Nordisk's U.S. president. “This has become a responsibility that needs to be shared among all those involved in healthcare and we’re going to do our part.” If drug companies self-regulate and get this drug pricing issue behind them along with the absence of political uncertainty may continue to provide a much needed lift to the sector.

ABOUT THE EDITOR - Noah Kiedrowski

I am biotechnology professional with a diverse scientific background and detailed knowledge in many therapeutic areas such as monoclonal antibodies, immunotherapies and antivirals. I have a personal interest in finance, investing, trading and global markets. My analysis is focused on stocks and exchange traded funds (ETFs) while exploring niche opportunities such as derivative trading via options. This newsletter is intended to provide investors with the latest developments and trends regarding the overall healthcare sector with a biotechnology emphasis. I'll be highlighting sector trends, merger and acquisition activity, noteworthy current events, political developments and drug approvals. My focus will be centered on well-established mid-cap and large-cap companies as well as utilizing appropriate ETFs as proxies for sector trends. This is a bi-monthly newsletter service that reflects my own opinions and analyses. This newsletter is not intended to be a recommendation to buy or sell any stock or ETF mentioned. I am not a professional financial advisor or tax professional, rather an individual investor who analyzes investment strategies and disseminates my analyses. I encourage all investors to conduct their own research and due diligence prior to investing.

This bi-monthly newsletter service reflects the opinions and analyses of INO Contributor, Noah Kiedrowski. This newsletter is not intended to be a recommendation to buy or sell any stock or ETF mentioned. Kiedrowski is not a professional financial advisor or tax professional, rather an individual investor who analyzes investment strategies and disseminates his own analyses. All traders and investors should conduct their own research and due diligence prior to investing.

The Political backdrop changed in ways virtually no survey had predicted and come 2017 the United Sates will inaugurate Donald Trump as the new president. As a sense of certainty took a few hours to digest as the presidential news flowed into the markets, essentially uprooting the pricing-in of a Clinton victory, pre-market trading was volatile with the Dow dropping over 700 points. This paradoxical presidential outcome quickly brought the Dow back to breakeven and ended the day up ~300 points. This post Trump victory has continued to rally the markets with what is now being coined as the “Trump Rally” as the Dow has broken all-time highs to power past the 19,000 benchmark. This rally has disproportionally benefited healthcare related stocks ranging from pharmaceutical companies to pharmacies and the wholesalers in-between. END_OF_DOCUMENT_TOKEN_TO_BE_REPLACED

Political uncertainty has roiled the markets as of late with initial predictions pricing-in a Clinton victory. As election night unfolded and a Trump victory was evident, the markets responded negatively in pre-market trading with the Dow dropping over 700 points. Upon the realization that Trump was in fact the president-elect, the markets bounced back and the Dow ended the day up ~300 points. In particular, healthcare related stocks from pharmaceutical companies to pharmacies and the wholesalers in-between all notched significant gains as traders viewed a republican controlled government in positive light with regard to this sector. The iShares NASDAQ Biotechnology Index (Ticker IBB) registered a $25 per share or 9% gain on the election news. It appears that investors are factoring-in a healthcare-friendly government that will be in contrast to the likes of Hillary Clinton and Bernie Sanders with regard to mergers and acquisitions and governmental regulations throughout the industry.

END_OF_DOCUMENT_TOKEN_TO_BE_REPLACED 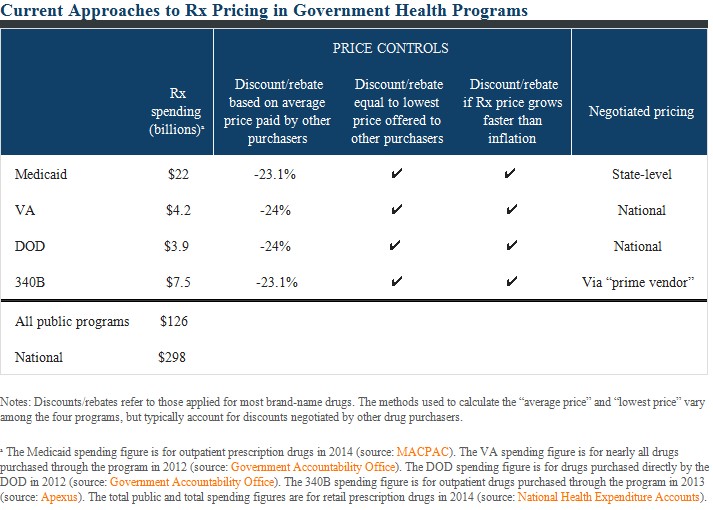 One issue of focus in the election rhetoric is Medicare drug price negotiation, which is specifically precluded in the Medicare Modernization Act of 2003. Furthermore, a noninterference provision was included: END_OF_DOCUMENT_TOKEN_TO_BE_REPLACED