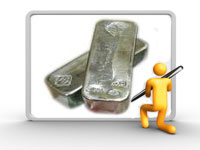 Late in 2009 a lot of folks began asking us about buying silver instead of gold. At the time, we stated exactly how we felt, in that, why would you try to buy something that is not in the same league as gold? The two markets are completely different and are driven by a different set of emotions and fundamentals.

This is the first video that I've done on silver in quite some time, but I think it's an important one for you to see.

One of the standout features that I noticed was the fact that when gold was making new all-time highs in early December, silver failed to take out the March 2008 high. I consider this to be a negative.