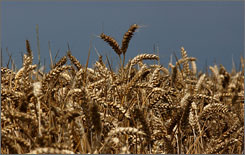 By John Waggoner and Sue Kirchhoff, USA TODAY
WASHINGTON — Cold steel is red-hot. So is lead. And wheat. Commodities are the hottest investment on the planet today.

Investment banks are scrambling to hire commodity traders and analysts, even as they lay off thousands of existing employees. Oil prices approached the once-unthinkable level of $100 a barrel last month before falling back Friday to $88.71. Grain and oilseeds trading on Chicago futures exchanges are up more than 25% from 2006. Copper prices soared so high that the U.S. Mint had to ban people from melting pennies and nickels to resell the metal.

For farmers, mining companies and commodities brokers, the boom in oil, metals and agricultural products is a boon. But for consumers, who are paying sharply higher prices for food and energy, the bull market in commodities means spending less on other things, from vacations to restaurants and entertainment.

And for the Federal Reserve, soaring commodity prices mean struggling to meet two conflicting goals: fighting inflation even while pumping money into the nation's banking system to prevent a broad economic slowdown as housing and credit markets teeter.

Overall, commodity prices are showing the largest sustained gains since the late 1970s and early 1980s. The Reuters (RTRSY) CRB index, which measures the price of a basket of basic foodstuffs, metals and fuels, has soared 18% in the past 12 months, and 121% since Dec. 31, 1999.

Oil prices are the most important and visible sign of the trend: The price of a barrel of West Texas light, sweet crude is now $88.71, vs. $61 at the start of this year and $11.37 in February 1999. But the International Monetary Fund (IMF) notes precious metals such as gold, industrial metals such as lead and nickel, and foodstuffs, including wheat and edible oils, all hit record highs in 2007.

Even lesser-known commodities such as potash, a potassium-rich material used to promote root development in plants, are skyrocketing. As global food and biofuel needs accelerate, demand is outstripping supply. The Potash Corp. of Saskatchewan has gradually raised prices by 60% from last January.

"We've had most of our customers on an allocation basis for the better part of the year. We can't fulfill their orders. We're getting them what we can get them right now," says Rhonda Speiss of Potash.

Commodity prices are jumping for a host of reasons. Two in particular: India and China, whose economies are racing. China's output gained at an 11.5% annual pace in the third quarter, vs. 4.9% for the USA. India's GDP soared 9.3%.

Such enormous growth requires raw materials, and lots of them. China, for example, produced 3.6 million barrels of oil a day in 2005 but consumed 6.5 million.

And it's not just China and India, says author and hedge fund manager Jim Rogers. When commodities boomed in the 1970s, China, India and much of Asia were subsistence economies. No longer: Much of Asia and the Third World in general are seeing dramatically higher standards of living. "They're all in the game now," Rogers says.

Growing incomes in those nations also mean a growing appetite for grains and livestock. At the same time, poor weather hurt this year's world wheat crop, cutting the supply to a 30-year low. Rising demand for corn-based ethanol means not only that agriculture prices are more closely tied to oil prices, but that farmers are devoting more acreage to corn and less to other crops — a big reason soybean prices jumped from about $6.25 a bushel on futures markets last year to nearly $11 this year.

"High demand, low supply — the market is completely changed," says David Doeringsfeld, general manager of the Port of Lewiston, Idaho, which has seen a surge in barge shipments of grain this year. Doeringsfeld's facility ships to the Port of Portland, which set a port record in September for the most tonnage in a single month. The vast majority of it was dry bulk cargo, including grain, potash and soda ash.

The greater interest by big hedge funds and other investors in commodity markets is also a factor in price volatility, though it's not clear how much. But there's no question that commodity investment has gone mainstream.

The Options Group, an executive search and strategic consulting firm, in a recent study found commodity hiring rates on pace to jump 33% from 2006, while top pay packages are five times bigger than in 2002. Investment banks are hiring commodity traders, given the rapid rise in raw materials.

Of course, price pressures have moderated for some commodities. Lumber prices are down sharply since 2005, with a number of lumber mills closing — some permanently — as housing tumbles.

But Ken Simonson, chief economist of the Associated General Contractors of America, predicts another upswing in materials prices. Construction prices have been rising at a 2% to 3% annual rate in the past few months, which Simonson predicts will soon rise to a 4% to 6% pace and a 6% to 8% rate a year from now.

"So much of what construction uses requires a lot of energy to mine or mill or manufacture or deliver," Simonson says.

The surge in commodity prices hurts profits for many firms, depresses consumer spending, and pumps up the odds of increased inflation.

Ken Goldstein, economist for the Conference Board, a private financial-analysis firm, notes that with profits down from recent lofty levels, companies may no longer be able to cover the higher cost of materials by reducing earnings.

"Despite all this talk about profit growth, earnings growth peaked a year ago," Goldstein says. "Businesses are going to have to force through some earnings power."

Economists, including the Fed, often prefer to use the core rate of inflation, which excludes the volatile food and energy components, when assessing short-term inflation trends. Consumers can't do that. Retail food inflation is running at a 5.5% rate this year, more than double the average pace. The energy component of the consumer price index has gained 14.5% since last October.

"The average wage earner buys gas at the gas station and food at the supermarket; no one gives them a discount to get their inflation rate down to core," says G. Kenneth Heebner, manager of CGM Capital Development (LOMCX) fund.

When consumers have to spend more on necessities, they have less available for niceties — such as new clothes, appliances or cars.

David Walker of Olathe, Kan., says higher oil prices have forced him to make big changes in his spending habits. Dining out is rare; so is casual shopping and going to see his beloved Kansas City Chiefs. "I got offered free tickets to the K.C./Green Bay game, and I had to decline," Walker says. "Tailgating costs alone precluded me from going."

The Fed in a bind

High commodity prices are one big reason for a seeming disconnect between financial markets, which expect additional Fed rate cuts to bolster the economy, and cautious language by some central bankers.

But Plosser pointedly noted that such insurance itself creates new risks, especially when oil and commodity prices suggest "significant" inflation pressures. A rate cut stimulates the economy, which, in turn, increases demand for food, energy and raw materials.

A big fear: a wage-price spiral, similar to what happened in the 1970s. CGM's Heebner worries about that, too: "Rising food and fuel costs will generate more pressure from labor to raise wages."

But there's a moderating influence today, Heebner says. "It's a global economy, and we have to compete with labor forces in other countries." Management can threaten to move operations overseas, where labor is cheaper.

But rate cuts also threaten to further depress the value of the dollar against other currencies. The declining dollar has played a big role in commodity markets. For example, OPEC is mulling whether to stop pricing oil in dollars, considering using a basket of currencies instead. The falling value of the dollar has cut into OPEC earnings and made oil exporters reluctant to increase production to relax price pressures. A falling dollar also means that other nations, whose currencies are worth more, are better able to afford dollar-denominated commodities, helping support prices. A lower dollar also means U.S. producers pay even more for imported commodities, stoking inflation.

"I'm shocked that the Fed, which said all year long, 'We're going to keep an eye on inflation,' they've forgotten all about it," says Adam Hewison, president of INO.com, a purveyor of data and other information to futures markets, warning that additional Fed rate cuts would "put more pressure on the dollar, meaning more inflation, importing inflation."

The Fed also fears a resurgence of an inflation mentality, when people expect and accept price increases. "If inflationary expectations rise, it could prove very costly to put the genie back in the bottle," Plosser said. "Should that scenario come to pass, the insurance policy may turn out to be a very expensive one."

The U.S. central bank hasn't published much research on the link between commodity prices and inflation since the 1990s, when analysts found that companies limited the amount of raw materials costs they passed on. The Fed found problems from rising oil prices in the 1980s were exacerbated by lenient central bank policies.

IMF economists Valerie Mercer-Blackman and Kevin Cheng estimate the surge in oil and other commodity prices will have a small inflationary impact in industrialized nations where economies are less energy-intensive than in the past and central banks have gained greater inflation-fighting credibility. The impact could be greater in developing nations.

And Dallas Fed President Richard Fisher has noted the odds of a "more pernicious" bleed-through from commodity prices are greater now than in recent years. The Fed's recent beige book look at economic conditions noted, for example, that three-fourths of manufacturers surveyed in the Boston Fed region raised prices to compensate for higher production costs.

That's not new to consumers, who are already scaling back.

"Inflation is mostly here. We are already seeing higher prices filter down to the consumer," says John Thomas, an analyst in McLean, Va. "My SUV is mostly parked, and I drive a smaller car, but I have cut back on other expenses, like entertainment, gift shopping and weekend road trips," Thomas says. "Next to go will be premium food."

USA Today is a registered trademark of USA Today