The stock market (SPY) has been up, down and all around since last week’s commentary. That’s because bulls and bears are slugging it out for dominance during this “Dazed & Confused” phase for the market.

What does that mean?

What should an investor do about it?

We will explore the answers for each of these pressing questions in this week’s Reitmeister Total Return commentary.

Now let’s a step back to last week’s commentary where I outlined 4 possible outcomes for the market after the very important Fed rate announcement on Wednesday 2/1. Indeed, we landed on the least of attractive of which. That being…

"This is where the Fed gives mixed signals. Still hawkish for a long time to save face given previous statements. And yet do tip their hat a little to moderating inflation.

This gray area leads to a trading range until investors have more facts in hand. I suspect that 4,000 is the low end with 4,200 at the high end. This comes hand in hand with a ton of volatility as each new headline has investors recalibrate the bull/bear odds."

The market since then has lived up to ever single syllable of the above expectations. Especially the part about the volatility that comes after every key headline. END_OF_DOCUMENT_TOKEN_TO_BE_REPLACED

Why are so many investment experts still calling for a bear market?

And just as interesting…why are so many equally talented investors saying the new bull market is already here?

Because investing is an inexact science leading some to rely on economic data…while others prefer to read the charts…or the expression on Powell’s face… or astrology signs or….(fill in the blank with the nuttiest thing you can think of).

So what is an investor to do when there are so many well-reasoned opinions that are giving such contradictory conclusions?

That will be the focus of this week’s commentary.

I believe the best way to tell this story is from a very personal place. That being where I have an Economics degree and most certainly diagnose the market from a fundamental point of view.

Early on in my career I used to make fun of chartist for playing the market like a video game instead of taking it more seriously with fundamentals. Yet that was quite foolish on my part as I have come to greatly respect many of the leading chartist like Kevin Matras of Zacks and JC Parets of AllStarCharts.com. There is simply no denying their keen insights on market direction.

Now let’s move the conversation forward to Wednesday’s Fed meeting. I was already bearish beforehand…as are the majority of market commentators at this time. And I became even more bearish after the announcement. Amazingly, others saw it differently as stocks 3% from the time of the speech into Thursday’s close.

But then something dawned on me in the early hours and could not get back to sleep. This led to the following trade alert that I sent out to Reitmeister Total Return members on Thursday morning. END_OF_DOCUMENT_TOKEN_TO_BE_REPLACED

The strength in cloud infrastructure and cloud-based applications drove a solid topline performance.

Without the impact of the foreign-exchange rates, ORCL’s adjusted EPS would have been 9 cents higher.

ORCL’s CEO, Safra Catz, said, “In Q2, Oracle’s total revenue grew 25% in constant currency-exceeding the high end of our guidance by more than $200 million. That strong overall revenue growth was powered by our infrastructure and applications cloud businesses that grew 59% and 45%, respectively, in constant currency.”

For fiscal 2023, the company expects its cloud revenue to grow more than 30% in constant currency compared to the 22% growth in fiscal 2022.

Here’s what could influence ORCL’s performance in the upcoming months:

However, a challenging macroeconomic environment in 2022, characterized by stubborn inflation and removal of Covid restrictions, saw big tech struggling to meet and exceed the high expectations of growth in subscribers/users and advertisement revenues set at the height of the pandemic.

The slump in the performance of these tech businesses was soon reflected in the price action of their stocks. Their dismal year can be summarized by the below snapshot at the end of October 2022. 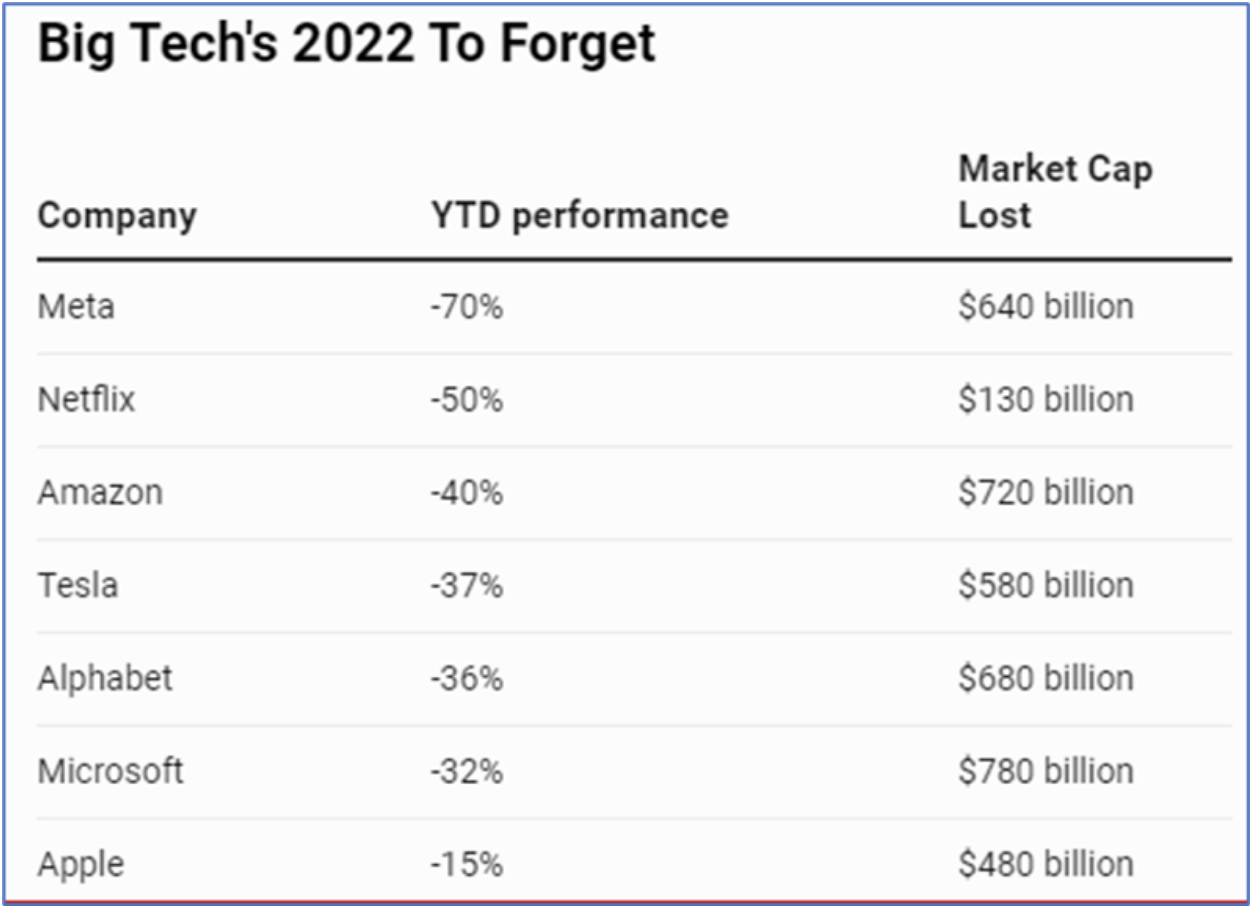 However, the drawdown brought the valuations of these compounders to a more comfortable buying point while they did the needful to recapture lost demand and improve the efficiency of their businesses.

END_OF_DOCUMENT_TOKEN_TO_BE_REPLACED

I was not the first guy to get bearish in 2022, but by May I got the memo just in the nick of time. This led to a major shift in my portfolio that allowed me to profit on the way down. And I have been steadfastly bearish since.

But just like the Fed, my outlook is “data dependent”. And recent data has me becoming less bearish. Note that is not the same thing as becoming bullish.

Why the change of heart? And what does that mean for trading strategy going forward?

Read on below for the full story…

First, let’s start with some important terminology. Less bearish is quite different than being bullish.

Imagine that I previously saw 80% odds of bear market and lower stock prices in 2023. Thus, only a 20% possibility of bull market.

Given recent information my view has shifted down to about 65% bearish probability versus 35% bullish. That is nearly 2 to 1 in favor of bear market forming… just a notch less bearish than before. The next logical question is…

You have already me talk non-stop since last May about all the reasons to be bearish. That is overflowing in my article archive. Plus my most recent presentation puts that all into perspective in a nice concise way: Stock Trading Plan for 2023.

Now we are going to flip over this coin and talk about the bullish view. It is hard for me to say it in a straight forward manner. Instead, I am going to flush out all the individual ideas that point in a bullish direction…the sum total of them is still less likely than the bearish thesis playing out. END_OF_DOCUMENT_TOKEN_TO_BE_REPLACED