The DOW dropped 370 points (2.9%) after a report from the Institute for Supply Management's (ISM) index of the service business sector announced a fall from 54.4 to 41.9. This is the first decline in the retail, travel, 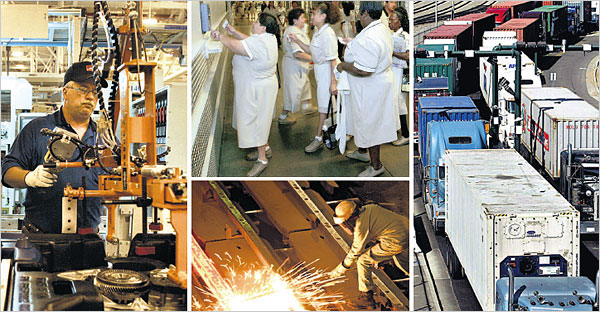 banking, construction, and restaurant industries in about 5 years. A reading below 50 indicates contraction; it was the first service-sector contraction in more than four and a half years. Economists had been expecting another month of growth for the service sector that accounts for 2/3's of the economy. The overall indication in January is that non-manufacturing has come to the end of a long-term period of growth," said Anthony Nieves, chairman of the Institute for Supply Management's non-manufacturing business survey committee.

This disappointing news coupled with a report highlighting the first decline in employment since August of 2003 has rocked the market this week. However Microsoft's (NASDAQ: MSFT) bid for Yahoo (NASDAQ: YHOO) took the spotlight leaving the unemployment report in the shadows. The report indicated the loss of 17,000 jobs in January, the greatest decline since 2003, despite an expected growth of 70,000 jobs.

How will the wake of these two reports affect the market in the year to come? Will the decrease in employed American citizens have a dramatic impact on US consumer spending? Will the fear of the “R-word” fuel a tailspin? For me, there is more questions than there are answers.

Will we see strength in the economy anytime soon? Will the FED come to the rescue? Cary Leahy, and economist at Decision Economics says, "We do have considerable stimulus from both the Federal Reserve and from a major cut in taxes in the middle of the year so the economy could experience a decent second half.”

As more reports are released and regardless of major moves we must remember to follow basic trading rules to curb our losses and protect our portfolio:

Diversify Your Portfolio (multiple sectors/ various position directions)
Listen To The Markets
Have A Strategy For Every Trade & Stick With It!
Be In The Know

One thought on “Decline In Service Sector Sent DOW Tumbling”