Today I’d like everyone to welcome Bob Iaccino fromTraderOutlook.com. Some of you might reconognize the name, and that’s because Bob is a frequent contributor on CNBC, CNBC Asia, Bloomberg Television, Bloomberg Radio, CNN, CNN International, Fox News, and several other media outlets as a special guest analyst. Yeah he’s all over the place and he knows what he’s talking about.

You can visit Bob's site TraderOutlook.com by clicking on this link.

All traders pick and entry point for a trade and once the trade is made, they look for a spot to get out. Most also identify a stop-loss level. The good traders have a target level they are looking to exit at, or a time frame in which to take the trade off. Not many however, use “2-target trades” very regularly. We use them quite often, looking to catch larger moves. Here’s why you should too.

2-target trades can also be defined as scaling into a position, but the main difference is that the trade scale is pre-planned in ½ trade increments and only when the trade is going in our favor. The levels are planned very specifically based on the risk/reward profile. 2-target trades are simple and can help eliminate some of the fear of putting on trades that have distant targets or longer timeframes. In the chart below, we have a recent EUR/USD trade that we discussed in our morning broadcast. 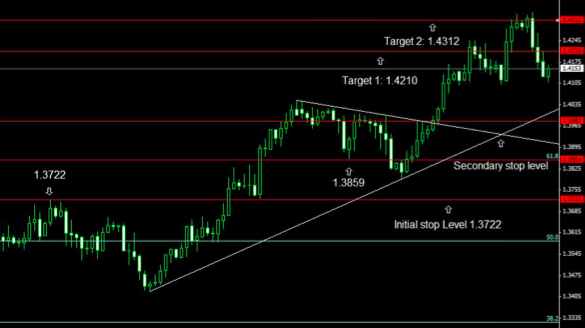 After  EUR/USD broke the isolated high at 1.3722 and proceeded to rally through it’s 61.8% retracement, we felt strongly that a rally back up to the old highs was imminent. We identifed an ultimate target of 1.4312 as well as some minor resitance on the way up, paricularlly1.4210. Considering the volatilty of late, we decided to use our 2 –target trading style to try and capture what we thought would be a large move. We entered a buy order at 1.3860, just above the 61.8% retracment and a stop-loss below 1.3722. The probability of the trade going our way was high and the potential reward was high. The risk however, at over 138 pips, was also high, so we entered the entry and stop orders orders for ½ our normal position size. We then looked for a price to add to our long on the way up, NOT TO SCALE INTO A LOSING TRADE. Had the trade gone against us, as you can see it initially did, and hit our stop-loss, we would have been stopped out of only ½ of our normal position size, cutting our risk in half.

We targeted a close above 1.3981 which would be a trendline breakout, as a second buy signal and our 2 targets were marked as 1.4210 and 1.4312. We also identified our secondary stop-loss level, which we determined to be the intersecting trendlines at 1.3935. All of this was work done before our first buy order was filled, giving us a solid plan to follow and a risk-comfort level on this trade.

As you can see on the chart, our first buy order was filled for ½ a position and the market immediately went 67 pips against us. This didn’t bother us, of course because we only held ½ a normal position, so it felt like a smaller loss. The market then rallied away from our stop at which time our second buy signal (a close above the trendline) was triggered. We now had on our full position at an average price of 1.3925. We then moved our stop-loss to the secondary stop level at 1.39.35, which would guarantee a worst case scenario of +10 pips. At this point, all our stress on the trade has been eliminated and we can comfortably wait for our targets to be reached. After the first target was reached we covered half the trade, moved or stop up to 1.4085 and allowed the market to do whatever it wished on the way to it the second target. We reached the second target of 1.4312 and covered the balance of the trade for a healthy profit on the way to new highs of 1.4338.

2-target trades seem like the old scaling in method or as they say in equities “dollar cost averaging” but they are used mainly to catch larger moves and relieve your mind of some of the risk so that you have less fear of putting these trades on. Keep in mind that longer, larger moves have plenty of chop and consolidation on their way to their ultimate target, giving you many options to calculate re-entry, profit and stop-loss levels. Always add the 2nd half of the position after the first half is profitable and chooses 2 targets and 2 targets only. More than 2 will increase the likelihood of being caught in a correction waiting for 3rd, 4th or 5th targets. Always trail your stop towards your average price as you get to a full position and always move it to breakeven or better after you have removed ½ the trade. There are many opportunities in the markets to use this method, so good luck!

One thought on “2-Target Trades”