As part of INO.com’s ongoing effort to bring solid educational information for investors, we are pleased to offer you free access to one of the most sought after grain traders in the industry.  Grain floor trader Matt Pierce shares his Monday grain report with us for free.  If you would like to receive this report via email for free each week, simply visit Grainanalyst.com and tell them INO sent you.

Calls:
Last week traders saw extreme activity with markets dropping dramatically on Thursday only to completely recover into month end. This is due to changing weather reports and money flow. The weather situation remains a major factor with the central part of the US very wet. The northern reaches of the Corn Belt remain under water. Flying home from Seattle yesterday I can attest that there is plenty of standing water in S. Dakota and into NW Iowa. The flip of this is the region around NW IL which looks amazing. Storms continue to roll across the delta and into the SE of the US offering caution to SRW farmers with standing water down there offering a new weather factor. The SW plains have seen scattered showers but totals remain minimal offering little hope for any recovery there. In all actuality, the trade is expecting a further drop in HRW conditions today with total winter wheat conditions expected to drop due to the heavy rains across the SRW production areas. S. American weather promotes a quick harvest pace putting pressure on world basis levels with China remaining very quiet on the demand front. Corn demand on the other hand is apparent and farmers have turned off the selling so domestic basis is firm everywhere with more expected this week as producers focus on field work and planting. In Europe, wheat was mixed overnight following Friday's massive gains. Weather looks dry again after patchy rains hit N. France over the weekend. They were considered to scattered to have any bearish impact. The market was held down after news of Bin Laden's death pulled macro markets lower as "world concern" fell. This was and is felt most in crude but I believe this to be a knee jerk reaction with no real change expected in terrorists networks. The US state department issued a warning to international travelers that the threat of reprisal is higher...this does not sound like a lower world concern. The overnight session was subdued before and after the announcement with wheat showing the only relative strength as May starts. Weather remains a major concern with talk that China will move back into the world bean demand market as this month progresses. Macro markets were weaker following the news with the energy markets offering the most weakness. Gold and precious metals were and are mixed heading into the first day session of the month. Softs are mixed to lower with weather concerns helping OJ rally significantly. The Agricultural markets look subdued as markets wait for more weather information. That will be the driving force this week and this month. All eyes are on the northern reaches of the US as the focus shifts from the SW plains to the NW plains. Markets will start quietly with May Day putting Europe and most of Asia on the sidelines. Latin America looks quiet with basis the biggest deal down there with both Brazil and Argentina searching for Chinese demand. I am looking for a lower start but nothing significant as weather premium needs to be put back into the markets. New crop beans should take a hit this week versus old crop helping the SN-SX spread on growing acreage talk. No receipts in corn should offer support to the CN-CZ spread this week if the trend continues. With basis firming I see no shift coming. I will look higher by week's end as the world realizes all the rain is really causing a problem. 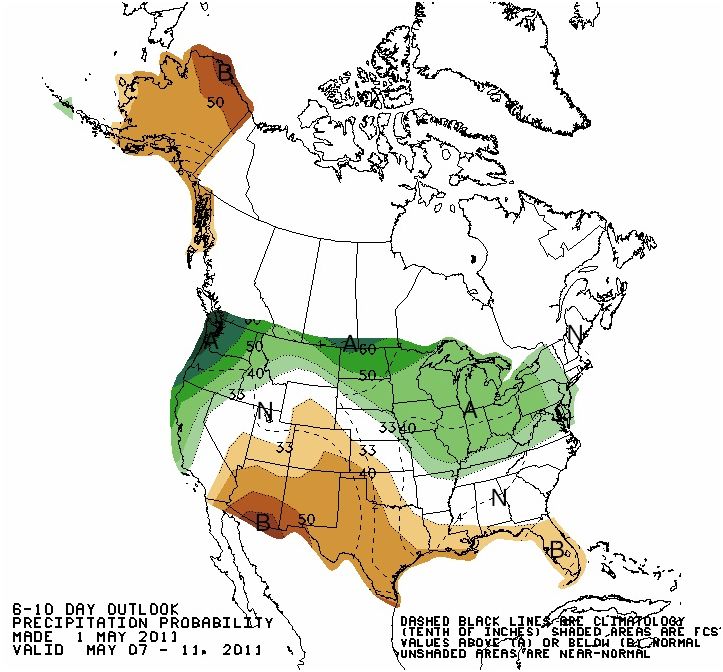 The map shows why I think traders should start putting serious risk premium back into corn. As planting rolls towards May 15th, there is little relief for the northern reaches of the planting region with standing water and below average temps seen through May 10th. The longer term planting situation appears no better with the 8-14 day showing no relief for the Dakotas or MN. This is likely a major problem for those that feel we need 92 million acres or more from corn. The only bearish impact I see here is the possible increase in bean acres due to corn not getting in on time.

Open Interest: Corn -17190; Beans -3860; Wheat +2480; Meal +1830; Bean oil +265. Month end brought selling in corn as positions took profits into the rally on Friday. The small gains in wheat were momentum buyers jumping back in on weather concerns over the SRW regions.

India is considering entering the export market after local purchases are finished in May. This would be a local scenario in which India would sell to Pakistan, Bangladesh and other surrounding countries.

Canadian elections held today with the Pro-Labor party gaining quickly in polls. This is considered the most unpredictable election on Canada in many years.

Rumors have the US planning on leaving Afghanistan now that Bin Laden is gone. This will be an interesting political battle. 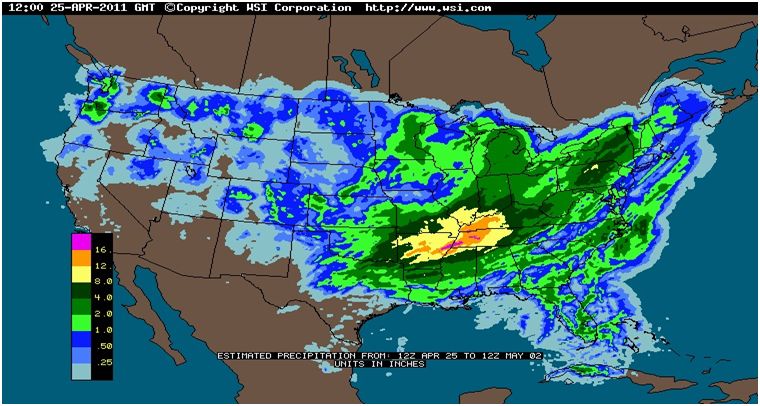 This is the weekly accumulated precipitation map from the previous 7 days. It shows only minor precipitation over the Dakotas but I can attest that they have massive standing water across the southern third of S. Dakota. The real issue is the already planted crops across the delta and into S. IL and MO. If this all needs to be replaced then I think the market has a real problem on its hands.

MACROS: Are mixed to bearish with a bearish undertone following the Bin Laden situation.

Daily Wisdom: To do no evil is good, to intend none better. - Claudius

2 thoughts on “Grain Trader Report for Monday May 2nd”