The ink on the second Minsk agreement hasn’t even dried and already speculators are rubbing their hands together in greedy anticipation, ready to take a plunge into the Ruble’s “bargain” rate against the Dollar in the hope of a quick recovery. The basis for that sentiment is rather simple; market movers have long realized that the Russian Ruble is no longer a financial game but rather a geopolitical one. If tensions around Ukraine ease, the Ruble is expected to get some respite; if, however, tensions increase then still more sanctions are likely to loom over the Russian economy and the Ruble trade turns to short. The constant escalation and de-escalation and vice versa of the Ukrainian crisis has forced Ruble players to exercise greater caution. Yet, for some, the latest Minsk agreement represents a broader and perhaps longer lasting de-escalation and thus might further suggest that the Ruble could regain some lost ground. To assess whether that assumption is viable we must first delve into the political intricacies of Russia’s showdown with the West.

As far as US foreign policy is concerned, it’s simple: Vladimir Putin is the aggressor. That automatically dictates that US and European policies react – first with threats and then with sanctions. However, while this core belief may be justified diplomatically and, perhaps even, morally, the latest Minsk agreement reveals a different picture. I have long held the position that while Putin is keen to please his right wing nationalist supporters at home and to preserve Russian interests across the former Soviet states, his key interest is to freeze the crisis and thus emerge as the victor, at home, in “Mother Russia,” while he still has an actual agreement in hand. In fact, this is why Putin’s actions, albeit aggressive, might actually be reactionary more than proactive. When Russia lost its grip on Ukraine, as the Ukrainian leader Viktor Yanukovych was toppled, Putin annexed Crimea which resulted in the destabilization of Ukraine. When the Ukrainian army seemed to prevail over the Russian separatists, Putin intervened more aggressively, and when the West countered his interventions with sanctions, Putin reacted to that with another escalation. Of course, this is not to condone Putin’s actions as justifiable; they are far from it. However, this is how Putin sees the world and therefore it’s important to understand that what makes Putin want to escalate or deescalate is simply, in his mind, a way to preserve the status quo.

This brings us to the current agreement. German Chancellor Angela Merkel, a seeming miracle worker, may be the only politician in the Western hemisphere who understands what makes Putin tick. As Merkel hopped from Minsk to Washington, meeting first with Putin and then US President Obama, there was only one thing that she was trying to secure, namely an American response which would not precipitate another Putin reaction. Although this is just an educated guess, perhaps Merkel was trying to discourage the US from arming the Ukrainian army, which many view as an automatic trigger point for Putin. With the Minsk agreement signed, investors are presuming that what Putin essentially got was a tacit promise that no additional sanctions and no military aid would be forthcoming from America. With that, Russia would have de facto control of the Russian speaking regions of Ukraine and, with Crimea effectively now under Russian “control,” Putin would be cast as the victor in Russia and thus able to stabilize the Russian economy. As Putin had earlier prepared his people for what could have been a protracted economic crisis, a quicker-than-expected respite could very easily convert to political gain. And with both sides preferring the temporary status quo, tensions could gradually deescalate which, for Ruble players, is indeed a cue to start picking up the currency.

With the Ruble now lower by 25.9% since Christmas, and with Oil prices possibly stabilizing, and with geopolitical tensions finally easing, it would seem that the Ruble is poised to regain lost ground and edge higher towards the 50 USD/RUB from its current level of 63.43, right? Under normal circumstances, given a prolonged de-escalation of tensions among Russia, Ukraine and the West, that would have been a probable scenario which would have put the Ruble on the list of bargains. After all, as I’d said earlier, the Ruble is a geopolitical game, right? Well, almost. There is, of course, an unfortunate twist; while tensions may have eased between Russia and the West, tensions between the EU and Greece have escalated. And as the rift, this time, is expected to be difficult to dismantle, with Greece perhaps now having a greater willingness to exit the Euro than ever before, the FX market is gradually preparing for choppy times ahead. With both Germany and the Euro group refusing to bow to Greece, and vice versa, the rift between the sides is expected to get worse before it gets better and thus is expected to create a big move into safe haven currencies and away from risky ones, including the Russian Ruble. So while there are good reasons to tag the Ruble as a bargain, the deepening crisis with Greece places the currency on the opposite path for the near term leading us to conclude that while the reasons to buy the Ruble are better than they have been, the timing couldn’t be worse. 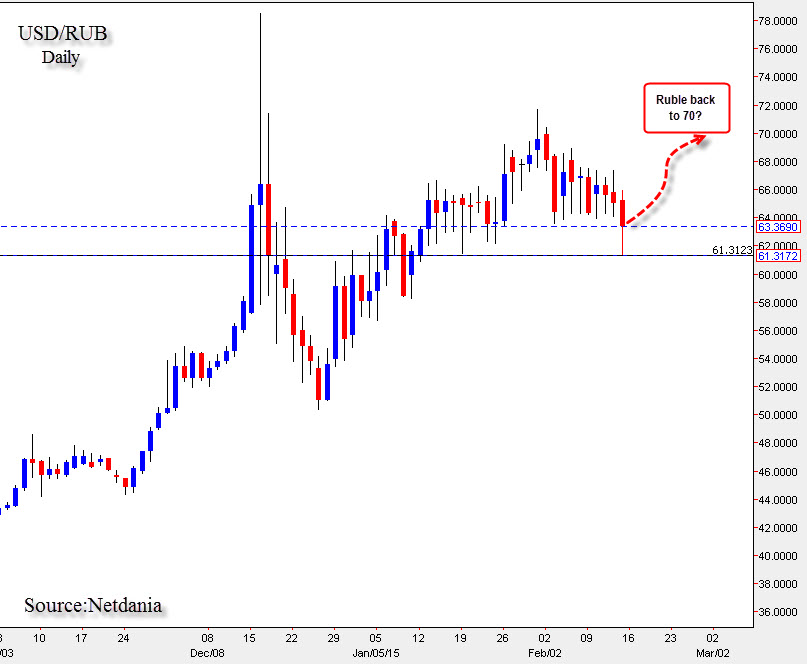 3 thoughts on “Is the Ruble a Worthwhile Bargain?”