If there's one business that will continue to expand regardless of the state of the economy, it's food production. Agricultural demands go hand-in-hand with the booming global population. As more land becomes necessary to feed the population, the ability to refine the process and make food production more efficient per acre while remaining environmentally and biologically friendly becomes of paramount importance.

Despite the fall in energy costs for the consumer, food prices continue to climb. Agribusiness is generally uncorrelated to the general stock market because of exogenous influences like the weather. Harsher-than-expected winter storms, droughts, and other meteorological phenomena can have a big impact on the final cost of products when they hit the shelf at the grocery store.

A Company With Explosive Earnings and Growing Momentum

Sales across the chicken, pork, beef, and prepared foods segments all increased significantly with the most impressive gain of 235% in the latter stemming from its acquisition of Hillshire Farm which closed in August of last year. A shift in consumer demand for chicken products over red meat caused management to raise earnings guidance for 2015 to $3.43 for the year.

A quick look at Tyson so far this year shows an upward trend. 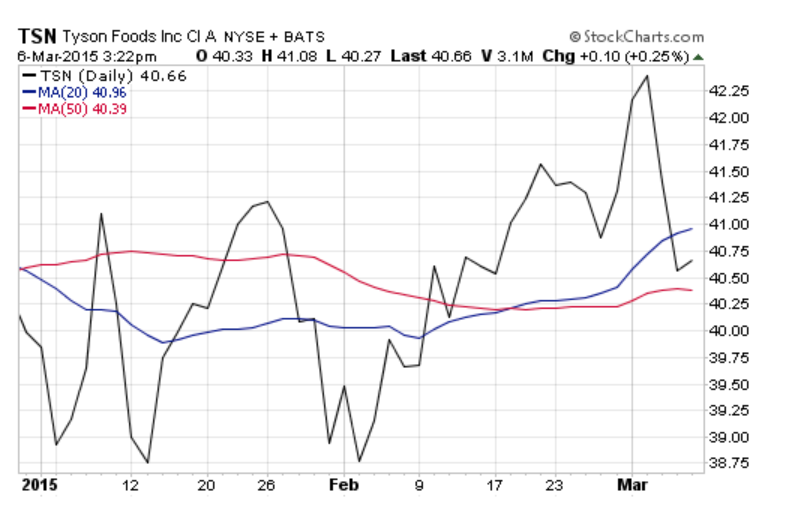 Notice the building momentum as indicated by the 20-day moving average crossing above the 50-day line. This tells us that the stock is picking up steam as it climbs and should continue along this path for the foreseeable future.

From a fundamental standpoint, Tyson looks undervalued. Its P/E of 13.9 and long term EPS growth rate of 9.6% give it a PEG ratio of 1.45 – a signal that the stock could be trading at discounted prices. These figures look even more compelling when compared against the food products industry average P/E of 24.4 and long term EPS growth of 7.3%. Investors even get some downside protection in the stock with a dividend yield of 1% which acts as a buffer against adverse price movements.

By my estimates considering Tyson's estimated EPS this year of $3.43 and its current P/E of 13.9, this stock should be trading at around $47.68 per share – a discount of about 17% from its current price.

Tyson's not the only name in food and farm products to keep an eye on. Sanderson Farms (SAFM) reported better-than-expected earnings with a whopping 130% increase year-over-year. Like Tyson, Sanderson Farms also saw gains being attributed by higher consumer demand for chicken and lower grain costs. With almost no long term debt to speak of, total current liabilities of $145 million, and cash holdings of $173 million, Sanderson Farms has plenty of room to grow and weather any future adverse economic conditions.

Here's a brief rundown of how Tyson and Sanderson stack up against the food producers industry figures:

As chicken prices go up and grain costs stay low, producers will likely kick up production causing prices to stabilize as an oversupply of chicken begins to saturate the market. Tyson, however, has already accounted for this and accounted for it in its business plan.

Instead of producing all of its own chickens, Tyson actually purchases the majority of them from their rivals in order to keep a potential supply glut in check. According to analyst data taken in December last year, Tyson was purchasing 4 million pounds of chicken every week with the expectation to increase that amount as supply went up.

A quote from management explains how this process works:

"But we've also have our buy versus grow. So you don't hear us talking a lot about supply, because we've put ourselves in a position to produce less than what we sell. And our goal going forward is to continue that buy versus grow.

So what happens when the industry overproduces, we typically will adjust our supply down and go into the marketplace and buy raw materials, for example boneless skinless breast meat. And we margin up on the buy of that. And then we continue to grow our more value-added business and our packaged goods business by taking other companies, our competitors if you will, their raw material, adding value to it, margining up, and keeping ourselves balance to short."

So far, that method has been working for Tyson Foods. As 2015 progresses, I expect its stock to outperform.