As the title suggests, there is a major FX trend brewing in the Middle East, and one might intuitively come to the conclusion that it has something to do with the collapse in Oil prices which, as we all know, tends to drive the region’s growth. That would be a natural assumption, however today our focus is on the Israeli Shekel, the currency of the “start-up nation,” once considered one of the best performing currencies but which is now facing a major turnaround.

Happy Days Are Over

Since 2008, it was clear that the appetite for the Israeli Shekel had been on the rise. A fair growth rate and a very shallow recession during the financial crisis of 2008 led investors to believe that the Israeli economy, though small, was substantially more resilient to the financial crisis than its peers across the seas. And for a while, that assumption proved right. While unemployment in the US surged to 10%, Israel’s unemployment which had initially surged to 8% quickly fell to pre-crisis levels at 5.4%. Growth in Israel, after a dip of 0.24%, accelerated to a pace of 5.63%, which was substantially faster than the dismal growth of the US economy. Not only that, but as the US real estate market was in utter meltdown, Israel’s housing market was booming with housing prices surging in double digits. The lower interest rates instituted by the Bank of Israel only ignited more inflows to the Israeli economy with overseas residents buying homes and foreign investors pouring into bonds and stocks. Even the conflicts in Gaza, while politically controversial, were considered minor in economic terms. Overall, the Middle East was generally considered rather stable and a minimal risk to Israel’s security.

Clearly, it was those happy times that drove investors into the Israeli economy and it was the main reason for the resilience of the Israeli Shekel. But those happy days have formally come to an end this week, with the Bank of Israel lowering interest rates to just 0.1%, lower even than the Fed Funds rate. While this is the first time in years that interest rates on the Israeli Shekel are lower than that of the US, it’s been 15 years since Israel and the United States were on such a diverging path, with Israeli rates falling and US rates rising (or at least expected to rise). Yet even then it was due primarily to Israel’s emergence from a sovereign debt crisis than due to a classical divergence. Therefore, the rate decision this week by the Bank of Israel is an historic game changer which signals that, for the first time in years, the outlook for the Israeli economy is worse than that of the US economy, officially putting an end to Israel’s happy days.

Beneath the Start-Up Glitter

So, what caused this “sudden” turnaround in the Israeli economy? While the deterioration in the Israeli economy became “official” only this week, it has in fact been building up for years. Israel’s high tech sector is, to put a fine point on it, “booming,” with productivity levels and ingenuity matched perhaps only by Silicon Valley, yet the outperformance of the Israeli tech sector disguises a deeply rooted problem in the Israeli economy. With the removal of the high tech sector from the equation an utterly different picture is revealed, an economy with one of the lowest productivity rates in the OECD, with poor infrastructure parallelized by red tape and powerful union workers. And the result of all that? While salaries in Israel’s tech sector were on the rise in accordance with the performance of the sector, the low productivity levels in the rest of the economy left salaries to stagnate. As the Bank of Israel moved to cut rates during the crisis, growth was not fueled by an eventual recovery but instead by massive growth of credit. This led to an exponential increase in staple prices, as well as an exuberant rise in real estate prices with home prices in Israel rising by 66.35% in 5 years. Since productivity remains low, salaries failed to catch up and before too long, free income among Israelis began to deteriorate. Homes have become almost unaffordable to most Israelis, and because of the massive increase in the price of staples since 2008, most Israelis find themselves today with substantially less free income.

For a while, the historically low interest rates in Israel meant that Israeli households were able to compensate for the lack of income growth with more credit, mostly by taking on bigger mortgages. This meant that most Israelis could keep afloat and allow Israeli growth to recover. Yet, as houses in Israel became more and more unaffordable and because rents have risen by roughly 30%, Israelis find they have no other option but to cut back on spending leading to a classic deflationary syndrome as purchasing power in Israel reaches its climax. And because Israeli purchasing power has reached a climax, zero interest rates, which used to help in the past, this time, it seems, are powerless. This leaves the Israeli economy which once outpaced the US, now lagging. In utter contrast, when it comes to interest rates, as the chart illustrates below, the US economy has caught up with Israel in employment levels, and in fact in most other important indicators.

Of course, with Israel’s rates now lower than that of the US, with the security risk for the country at its highest level in years, and with the Israel engine of growth now exhausted, it’s only natural to expect a reversal in the Israeli Shekel, which is now, more than ever, exposed to carry trade against the US dollar. As the chart below reveals, the triangle of the USD/ILS trade is on the path to be broken with this week’s reversal, putting the next immediate target for the pair at 4.2, a 5% depreciation in the Shekel, making it one of the most interesting FX trades set to unravel in 2015. 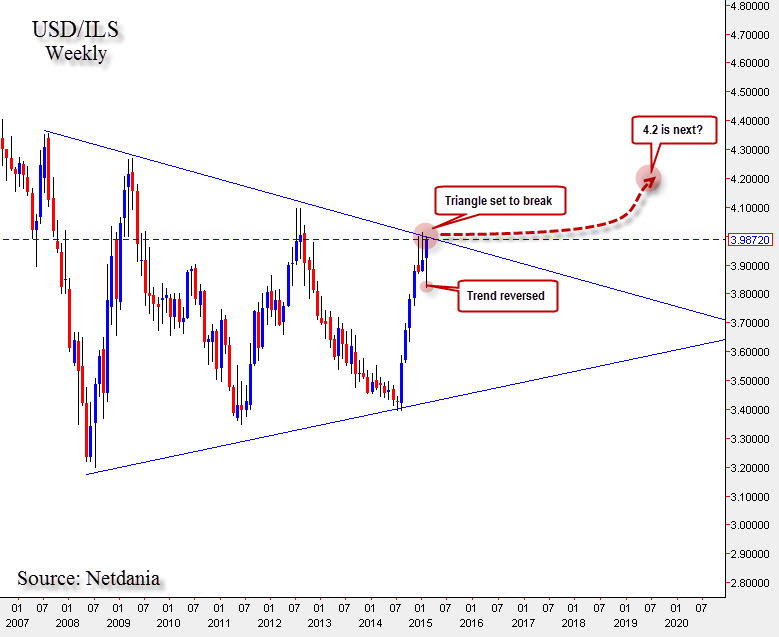 Disclosure: This article is the opinion of the contributor themselves. The contributor does have an interest in the USD/ILS rising as of the date of publication. The above is a matter of opinion provided for general information purposes only and is not intended as investment advice. This contributor is not receiving compensation (other than from INO.com) for their opinion.