How do you know what "your" forex market will do tomorrow?

You don't. We don't. Nobody does. All anyone can do is guess. But some guesses are more "educated" than others.

In a recent interview, Elliott Wave International's Senior Currency Strategist, Jim Martens, explained why for the past almost 30 years his favorite method to "guess" at the market's trend has been Elliott wave analysis:

"What separates Elliott wave fans from the rest of the public is that the public has no basis for determining when the trend may be over."

Let's take a look at a recent example: namely, price action in EURUSD on April 5-7.

Since the mid-March low in EURUSD, Jim and his Currency Pro Service team have been tracking a "messy" Elliott wave pattern in the euro-dollar: a correction. "Messy," because corrections are just that: choppy, overlapping, often directionless moments when it's just plain hard to make heads or tails.

Yet, under Elliott wave analysis, even corrections have rules and guidelines. There are 13 known corrective Elliott wave price patterns, and if you nail what part -- and of which pattern -- you find yourself in right now, you can make a strong case about where the market will go tomorrow. [Higher in a correction??]

The EURUSD recovery carried into Friday and, as a result, we have to consider the idea the rise from 1.0462 is incomplete. We've been considering the idea the euro decline ended at the recent low. The problem is the structure of the subsequent recovery. It is not clearly impulsive. That means it could represent a correction.

Jim's bullish forecast was based on the fact that the rising corrective Elliott wave pattern you see in the chart above was not complete, leaving more room to the upside. The next day, EURUSD indeed rallied: Despite the expected rally, though, the wave pattern also warned that the push higher would end soon. So, on April 6 Jim posted this update for his Currency Pro Service followers:

Whether 1.1051 is exceeded or not, gains might come as the result of a bullish triangle... which would make the push to a new high above 1.1051 a fifth wave. A correction should start soon after and from not much higher. The area of the triangle to 1.0964 might act as support...

The reason why Jim knew on April 6 that EURUSD should soon reverse lower was because at a larger Elliott wave degree, EURUSD was likely building a triangle price pattern. Triangles are sideways moves labeled ABCDE:

In the chart above you see that on April 6 EURUSD was likely ending wave D up, with wave E down soon to follow. That's why Jim warned that any rally would not go too high. And it didn't -- EURUSD reversed sharply lower (in wave E) the very next day, April 7: 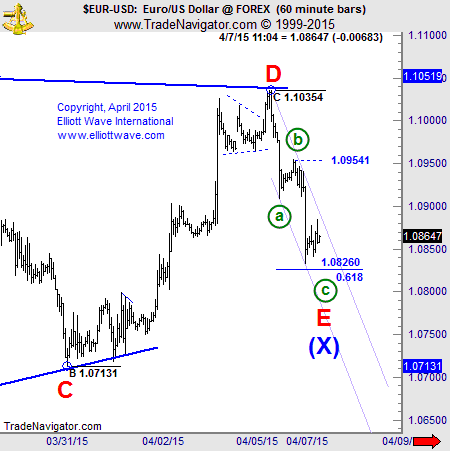 That's just one example of how you can make "educated guesses" about the market's direction using Elliott wave analysis. We have plenty more!

In fact, to learn more about the Elliott wave method, we invite you to read our free 10-page eBook, "Trading Forex: How the Elliott Wave Principle Can Boost Your Forex Success."

The eBook is yours free, instantly, with a quick sign-up for Club EWI, the world's largest online community of Elliott wave investors and traders (325,000 free members strong!)

This article was syndicated by Elliott Wave International and was originally published under the headline EURUSD: Why Recent Ups and Downs Are NOT Random. EWI is the world's largest market forecasting firm. Its staff of full-time analysts led by Chartered Market Technician Robert Prechter provides 24-hour-a-day market analysis to institutional and private investors around the world.