Hello MarketClub members everywhere, there are two big winners today. The first winner has to be Amazon.com Inc. (NASDAQ:AMZN), they announced earnings last night and blew away all the estimates by a wide margin. Amazon announced its first real profit in 20 years. In after-hours trading, the stock was up over 11% which made Jeff Bezos, who founded Amazon a little over 20 years ago, the third wealthiest man in America right behind Warren Buffet and Bill Gates. I congratulate both Amazon and Jeff Bezos for sticking to their guns and providing an amazing, first-class service. 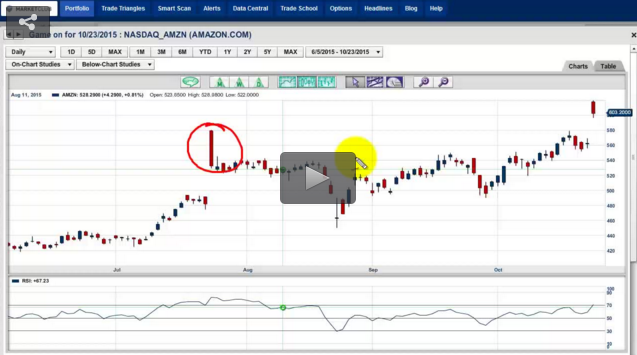 If you watched yesterday's video, MarketClub's Trade Triangles nailed Amazon's up move and I predicted that the stock would trade at $600 or higher. You can watch yesterday's video right here. For those of you who watched the video and took action, you just made a quick 10% on your money in less than 24 hours.

The second winner is Microsoft Corporation (NASDAQ:MSFT). The stock also jumped almost 10% in overnight trading. I talked specifically about that stock yesterday and what I thought it would do.

The other big news today is that the Central Bank of China cut interest rates for the sixth time since last November. This cut in rates appears to be a move by the Central Bank to goose up China's lagging economy. It remains to be seen whether or not it will be successful.

One market to watch today is the gold market. I thought yesterday's market action was particularly interesting in gold based on the statements put out by the European Central Bank (ECB). The ECB indicated that a deflationary economy was very much in the cards and that should have been a negative for gold, but it wasn't. Gold did not collapse and actually closed higher on the day. I see this as a reaffirming signal of the underlying strength in this precious metal.

Well, it's the third week in October and all three major indices acted very strongly to the upside. It begets the question, is this a real turnaround or just a fake out? All of my work suggests that the indices themselves are in a sideways and undecided mode.

The Trade Triangles issued a new red weekly Trade Triangle today at the $44.45 level indicating that the intermediate-term trend has changed and crude oil is now in a bear market with a Chart Analysis Score of -100. I will tell you where I see crude oil heading from here.

The euro looks to be on the defensive as both the daily and weekly Trade Triangles are now negative on the euro. I can see this currency slipping down to the 1.08 level in the weeks ahead.

Have a great weekend everyone.